Nanosensors are any biological, chemical, or surgical sensory points used to convey information about nanoparticles to the macroscopic world. Their use mainly include various medicinal purposes and as gateways to building other nanoproducts, such as computer chips that work at the nanoscale and nanorobots. Presently, there are several ways proposed to make nanosensors, including top-down lithography, bottom-up assembly, and molecular self-assembly.[1]

Medicinal uses of nanosensors mainly revolve around the potential of nanosensors to accurately identify particular cells or places in the body in need. By measuring changes in volume, concentration, displacement and velocity, gravitational, electrical, and magnetic forces, pressure, or temperature of cells in a body, nanosensors may be able to distinguish between and recognize certain cells, most notably those of cancer, at the molecular level in order to deliver medicine or monitor development to specific places in the body.[2] In addition, they may be able to detect macroscopic variations from outside the body and communicate these changes to other nanoproducts working within the body.

One example of nanosensors involves using the fluorescence properties of cadmium selenide quantum dots as sensors to uncover tumors within the body. By injecting a body with these quantum dots, a doctor could see where a tumor or cancer cell was by finding the injected quantum dots, an easy process because of their fluorescence. Developed nanosensor quantum dots would be specifically constructed to find only the particular cell for which the body was at risk. A downside to the cadmium selenide dots, however, is that they are highly toxic to the body. As a result, researchers are working on developing alternate dots made out of a different, less toxic material while still retaining some of the fluorescence properties. In particular, they have been investigating the particular benefits of zinc sulfide quantum dots which, though they are not quite as fluorescent as cadmium selenide, can be augmented with other metals including manganese and various lanthanide elements. In addition, these newer quantum dots become more fluorescent when they bond to their target cells. (Quantum) Potential predicted functions may also include sensors used to detect specific DNA in order to recognize explicit genetic defects, especially for individuals at high-risk and implanted sensors that can automatically detect glucose levels for diabetic subjects more simply than current detectors.[3] DNA can also serve as sacrificial layer for manufacturing CMOS IC, integrating a nanodevice with sensing capabilities.[4] Therefore, using proteomic patterns and new hybrid materials, nanobiosensors can also be used to enable components configured into a hybrid semiconductor substrate as part of the circuit assembly. The development and miniaturization of nanobiosensors should provide interesting new opportunities.[5]

Other projected products most commonly involve using nanosensors to build smaller integrated circuits, as well as incorporating them into various other commodities made using other forms of nanotechnology for use in a variety of situations including transportation, communication, improvements in structural integrity, and robotics.[1] Nanosensors may also eventually be valuable as more accurate monitors of material states for use in systems where size and weight are constrained, such as in satellites and other aeronautic machines.

Currently, the most common mass-produced functioning nanosensors exist in the biological world as natural receptors of outside stimulation. For instance, sense of smell, especially in animals in which it is particularly strong, such as dogs, functions using receptors that sense nanosized molecules. Certain plants, too, use nanosensors to detect sunlight; various fish use nanosensors to detect minuscule vibrations in the surrounding water; and many insects detect sex pheromones using nanosensors.

One of the first working examples of a synthetic nanosensor was built by researchers at the Georgia Institute of Technology in 1999.[6] It involved attaching a single particle onto the end of a carbon nanotube and measuring the vibrational frequency of the nanotube both with and without the particle. The discrepancy between the two frequencies allowed the researchers to measure the mass of the attached particle.[1]

Chemical sensors, too, have been built using nanotubes to detect various properties of gaseous molecules. Carbon nanotubes have been used to sense ionization of gaseous molecules while nanotubes made out of titanium have been employed to detect atmospheric concentrations of hydrogen at the molecular level.[7][8] Many of these involve a system by which nanosensors are built to have a specific pocket for another molecule. When that particular molecule, and only that specific molecule, fits into the nanosensor, and light is shone upon the nanosensor, it will reflect different wavelengths of light and, thus, be a different color.[3] In a similar fashion, Flood et al. have shown that supramolecular host-guest chemistry offers quantitative sensing using Raman scattered light[9] as well as SERS.[10]

Photonic devices can also be used as nanosensors to quantify concentrations of clinically relevant samples. A principle of operation of these sensors is based on the chemical modulation of a hydrogel film volume that incorporates a Bragg grating.[11] As the hydrogel swells or shrinks upon chemical stimulation, the Bragg grating changes color and diffracts light at different wavelengths. The diffracted light can be correlated with the concentration of a target analyte.

There are currently several hypothesized ways to produce nanosensors. Top-down lithography is the manner in which most integrated circuits are now made. It involves starting out with a larger block of some material and carving out the desired form. These carved out devices, notably put to use in specific microelectromechanical systems used as microsensors, generally only reach the micro size, but the most recent of these have begun to incorporate nanosized components.[1]

Another way to produce nanosensors is through the bottom-up method, which involves assembling the sensors out of even more minuscule components, most likely individual atoms or molecules. This would involve moving atoms of a particular substance one by one into particular positions which, though it has been achieved in laboratory tests using tools such as atomic force microscopes, is still a significant difficulty, especially to do en masse, both for logistic reasons as well as economic ones. Most likely, this process would be used mainly for building starter molecules for self-assembling sensors. 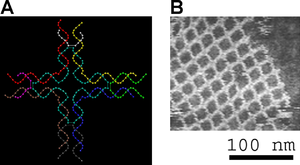 The third way, which promises far faster results, involves self-assembly, or “growing” particular nanostructures to be used as sensors. This most often entails one of two types of assembly. The first involves using a piece of some previously created or naturally formed nanostructure and immersing it in free atoms of its own kind. After a given period, the structure, having an irregular surface that would make it prone to attracting more molecules as a continuation of its current pattern, would capture some of the free atoms and continue to form more of itself to make larger components of nanosensors.

The second type of self-assembly starts with an already complete set of components that would automatically assemble themselves into a finished product. Though this has been so far successful only in assembling computer chips at the micro size, researchers hope to eventually be able to do it at the nanometer size for multiple products, including nanosensors. Accurately being able to reproduce this effect for a desired sensor in a laboratory would imply that scientists could manufacture nanosensors much more quickly and potentially far more cheaply by letting numerous molecules assemble themselves with little or no outside influence, rather than having to manually assemble each sensor.

Though nanosensor technology is a relatively new field, global projections for sales of products incorporating nanosensors range from $0.6 billion to $2.7 billion in the next three to four years[citation needed]. They will likely be included in most modern circuitry used in advanced computing systems, since their potential to provide the link between other forms of nanotechnology and the macroscopic world allows developers to fully exploit the potential of nanotechnology to miniaturize computer chips while vastly expanding their storage potential.

First, however, nanosensor developers must overcome the present high costs of production in order to become worthwhile for implementation in consumer products. Additionally, nanosensor reliability is not yet suitable for widespread use, and, because of their scarcity, nanosensors have yet to be marketed and implemented outside of research facilities.[1] Consequently, nanosensors have yet to be made compatible with most consumer technologies for which they have been projected to eventually enhance.

Ethical and social impacts are harder to define and sort as good or bad compared to health and environmental impacts. The advancement in detecting and sensing different biological and chemical species with increased capacity and accuracy may transform societal mechanisms that were originally designed on uncertainty and imprecise information. For example, the ability to measure extremely low amounts of air pollutants or toxic materials in water raises questions and dilemmas of risk thresholds especially if the advancement of such technologies outpaces the ability of the public to respond. As another example, medical sensors will not only help in diagnoses and treatment but may also predict the future profile of an individual. This will add to the information used by health insurance companies to grant or deny coverage. Other social issues resulting from the widespread use of nanosensors and surveillance devices include privacy invasion and security issues.