Narodnaya Volya (Russian: Наро́дная во́ля; IPA: [nɐˈrodnəjə ˈvolʲə], The People’s Will or The People's Freedom)[1] was a Russian revolutionary left-wing organization in the late 19th century, best known for the successful assassination of Tsar Alexander II of Russia. It was founded in 1879 and created a centralized and well-disguised organization in a time of diverse liberation movements in Russia. Narodnaya Volya was led by its Executive Committee: Alexander Mikhailov, Aleksandr Kvyatkovsky, Andrei Zhelyabov, Sophia Perovskaya, Vera Figner, Nikolai Morozov, Mikhail Frolenko, Lev Tikhomirov, Alexander Barannikov, Anna Yakimova, Maria Oshanina and others. Vladimir Lenin's elder brother, Alexander Ulyanov was a later member of a subsequent incarnation of Narodnaya Volya, and led a cell that plotted to assassinate Tsar Alexander III.

The Executive Committee was in charge of a network of local and special groups (composed of workers, students, and members of the military). In 1879–1883, Narodnaya Volya had affiliates in almost 50 cities, especially in Ukraine and the Volga region. Though the number of its members never exceeded 500, Narodnaya Volya had a few thousand followers.

Narodnaya Volya’s Program contained the following demands: convocation of the Constituent Assembly (for designing a Constitution); introduction of universal suffrage; permanent people’s representation, freedom of speech, press, and assembly; communal self-government; exchange of the permanent army with a people’s volunteer corps; transfer of land to the people; gradual placement of the factories under the control of the workers; and granting oppressed peoples of the Russian Empire the right to self-determination.

Narodnaya Volya's Program was a mix of democratic and socialist reforms. Narodnaya Volya differed from its parent organization, the narodnik Zemlya i volya, in that its members had come to believe that a social revolution would be impossible in the absence of a political revolution; the peasantry could not take possession of the land as long as the government remained autocratic. Given Zemlya i Volya's failures in its propaganda efforts among the peasants in the movements "to the people" in the early 1870s, Narodnaya Volya turned its energies against the central government. However, unlike Marxists, they continued to believe that Russia could achieve socialism through a peasant revolution, bypassing the stage of capitalism.

The members of Narodnaya Volya were not in complete agreement about the relationship between the social and political revolutions; some believed in the possibility of achieving both simultaneously, relying on the socialist instincts of the Russian peasantry, as demonstrated in the traditional peasant commune. Other members believed that a political revolution would have to take place first and, after the autocracy had been overthrown and democratic liberties established, revolutionaries would prepare people for the socialist revolution. The Liberal faction of Narodnaya Volya (which had no real influence) proposed to limit their demands to getting a Constitution from the tsarist government. 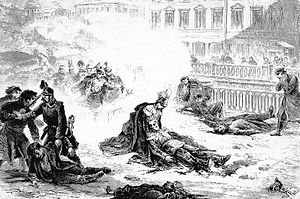 The assassination of Alexander II of Russia, 1881

As time went by, terrorism (by contemporary definitions) too became increasingly more important. A special place in the history of Narodnaya Volya belongs to its "terrorist faction", whose members — including Aleksandr Ulyanov (Lenin's older brother) — are also known as Pervomartovtsy. Narodnaya Volya prepared seven assassination attempts on the life of Tsar Alexander II (until they finally killed him), and later on that of Alexander III. Its terror frightened the government and persuaded it to make a few concessions. However, the regime soon realized that the people would not rise up in support of the revolutionaries, and this encouraged the Russian government to counterattack. In 1879–83, there were more than 70 trials of NV's members with about 2,000 people brought to trial (see Trial of the Fourteen). Narodnaya Volya's members were imprisoned or exiled. This was the end of the organization. The great irony of the Narodnaya Volya is that their aim was to save Russia from the autocracy, yet their assassination of Alexander II on 13 March [O.S. 1 March] 1881 perpetuated autocratic oppression. Alexander III would take no chances with reform or with liberal ideas. In many ways the Narodnaya Volya convinced the tsar that he must use an iron fist, not an unclenched hand, to save the monarchy.

After the assassination of Alexander II, Narodnaya Volya went through a period of ideological and organizational crisis. The most significant attempts at reviving Narodnaya Volya are associated with the names of Gherman Lopatin (1884), Pyotr Yakubovich (1883–1884), Boris Orzhikh, Vladimir Bogoraz, Lev Sternberg (1885), and Sofia Ginsburg (1889). Organizations similar to Narodnaya Volya in the 1890s (in St. Petersburg and abroad) largely abandoned the revolutionary ideas of Narodnaya Volya.

Narodnaya Volya’s activity became one of the most important elements of the revolutionary situation in the late 1879–1880. However, ineffective tactics of political conspiracy and preference for terrorism over other means of struggle failed. At the turn of the century, however, as increasing numbers of former members of Narodnaya Volya were released from prison and exile, these veteran revolutionaries helped to form the Socialist Revolutionary Party, which revived many of the goals and methods of the former narodniki, including peasant revolution and terror.

In Assassin's Creed: The Fall (an American comic book mini-series set in the fictional universe of the historical action-adventure video game series called Assassin's Creed), the Narodnaya Volya were the Russian branch of the Assassin Order. They were responsible for a number of acts of sabotage and murder; their most well known being the assassination of Tsar Alexander II of Russia with a bomb, after five separate attempts on his life.[2]

In episode nine, season four, of the televised show Warehouse 13 a tatouage referencing Narodnaya Volya appears throughout the episode.

The assassination of Alexander II by Narodnaya Volya has been fictionalized several times: