Since narrow-gauge railways are usually built with smaller radius curves, smaller structure gauges, lighter rails, etc., they can be substantially less costly to build, equip, and operate than standard gauge or broad gauge railways, particularly in mountainous or difficult terrain. The lower costs of narrow-gauge railways mean they are often built to serve industries and communities where the traffic potential would not justify the cost of building a standard or broad gauge line.

Narrow-gauge railways also have specialized use in mines and other environments where a very small structure gauge makes a very small loading gauge necessary. Narrow-gauge railways also have more general applications. Nonindustrial narrow-gauge mountain railways are or were common in the Rocky Mountains of the United States and the Pacific Cordillera of Canada, in Mexico, Switzerland, the former Yugoslavia, Greece, India, and Costa Rica. In some countries, narrow gauge is the standard, like the 3 ft 6 in (1,067 mm) gauge in Japan, Indonesia, Taiwan, New Zealand, South Africa, and Tasmania, and the 1,000 mm (3 ft 3 3⁄8 in) metre gauge in Malaysia and Thailand.

Many narrow-gauge street tramways are used, particularly in Europe, where 1,000 mm (3 ft 3 3⁄8 in) metre gauge tramways are common. 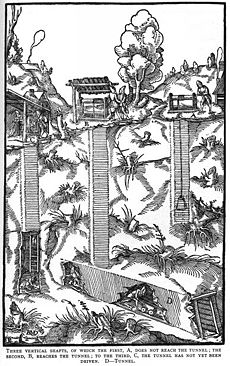 Woodcut from De re metallica showing narrow gauge railway in mine, 1556

The earliest recorded railway is shown in the De re metallica of 1556, which shows a mine in Bohemia with a railway of about 2 ft (610 mm) gauge. During the 16th century, railways were mainly restricted to hand-pushed narrow gauge lines in mines throughout Europe. During the 17th century, mine railways were extended to provide transportation above ground. These lines were industrial, connecting mines with nearby transportation points, usually canals or other waterways. These railways were usually built to the same narrow gauge as the mine railways from which they developed.[1]

Extensive narrow gauge railway systems served the front-line trenches of both sides in World War I. They were a short-lived military application, and after the end of the war, the surplus equipment from these created a small boom in narrow gauge railway building in Europe.

Narrow gauge railways usually cost less to build because they are usually lighter in construction, using smaller cars and locomotives (smaller loading gauge), as well as smaller bridges, smaller tunnels (smaller structure gauge) and tighter curves. Narrow gauge is thus often used in mountainous terrain, where the savings in civil engineering work can be substantial. It is also used in sparsely populated areas where the potential demand is too low for broader gauge railways to be economically viable. This is the case in some of Australia and most of Southern Africa, where extremely poor soils have led to population densities too low for standard gauge to be viable.

For temporary railways that will be removed after short-term use, such as for construction, the logging industry, the mining industry, or large-scale construction projects, especially in confined spaces, such as the Channel Tunnel, a narrow gauge railway is substantially cheaper and easier to install and remove. The use of such railways has almost vanished due to the capabilities of modern trucks.

Narrow gauge railways cannot interchange rolling stock such as freight and passenger cars freely with the standard gauge or broad gauge railways with which they link, and the transfers of passengers and freight require time-consuming manual labour or substantial capital expenditure. Some bulk commodities, such as coal, ore, and gravel, can be mechanically transshipped, but this still incurs time penalties and the equipment required for the transfer is often complex to maintain.

Also in times of peak demand, it is very difficult to move rolling stock to where it is needed when a break of gauge exists, so enough rolling stock must be available to meet a narrow gauge railways' own peak demand, which might be much more than needed by equivalent standard gauge railways, and the surplus equipment generated no cash flow during periods of low demand.

Solutions to these problems of transshipment are bogie exchange between cars, a rollbock system, variable gauge, dual gauge, or even gauge conversion. European standard gauge trains normally use buffers and chain couplers, which do not allow such tight curves, a main reason to have narrow gauge. Therefore, narrow gauge trains normally use other couplers, which makes bogie exchange meaningless.

Another problem for narrow gauge railways was that they lacked the physical space to grow: their cheap construction meant they were engineered only for their initial traffic demands. While a standard or broad gauge railway could more easily be upgraded to handle heavier, faster traffic, many narrow gauge railways were impractical to improve. Speeds and loads hauled could not increase, so traffic density was significantly limited. In the case of Queensland, Australia, the Queensland Rail passenger network has nearly reached its capacity due to the narrow gauge and an ever increasing population, as such, new lines are to be built, thus negating the original cost savings.

The heavy duty 3 ft 6 in (1,067 mm) narrow gauge railways in Australia (e.g. Queensland), South Africa, and New Zealand show that if the track is built to a heavy-duty standard, performance almost as good as a standard gauge line is possible. Some 200-car trains operate on the Sishen-Saldanha railway in South Africa, and high-speed tilt-trains in Queensland. Another example of a heavy-duty narrow gauge line is EFVM in Brazil. 1,000 mm (3 ft 3 3⁄8 in) gauge, it has over-100-pound rail (100 lb/yd or 49.6 kg/m) and a loading gauge almost as large as US nonexcess-height lines. It has multiple 4,000 hp (3,000 kW) locomotives and 200+ car trains. In South Africa and New Zealand, the loading gauge is similar to the restricted British loading gauge, and in New Zealand some British Rail Mark 2 carriages have been rebuilt with new bogies for use by Tranz Scenic (Wellington-Palmerston North service), Tranz Metro (Wellington-Masterton service), and Transdev Auckland (Auckland suburban services).

The reduced stability of narrow gauge means its trains cannot run at the same high speeds as on broader gauges, unless the tracks are aligned with greater precision[citation needed]. In Japan and Queensland, recent permanent way improvements have allowed trains on 1,067 mm (3 ft 6 in) gauge tracks to run at 160 km/h (99 mph) and faster. Queensland Rail's tilt train is currently the fastest train in Australia and the fastest 1,067 mm (3 ft 6 in) gauge train in the world, setting a record at 210 km/h.[3] A special 2 ft (610 mm) gauge railcar was built for the Otavi Mining and Railway Company with a design speed of 137 km/h.[4]

Compare these speeds with standard gauge or broad gauge trains which can run at up to 320 km/h (199 mph).[5] The contrast is most evident in Japan, home of the Shinkansen, a network of standard gauge lines built solely for high-speed rail in a country where 1,067 mm (3 ft 6 in) narrow gauge is the predominant standard.

Curve radius is also important for high speeds: narrow gauge railways tend to have sharper curves, which limits the speed at which a vehicle can safely proceed along the track.

Many engineers considered the cost of a railway varies with some power of the gauge, so the narrower gauge the cheaper it might be. This applied also to different narrow gauges, such as a proposed line in Papua using either 610 mm (2 ft) or 1,067 mm (3 ft 6 in).[6]

Scotch gauge was the name given to a 4 ft 6 in (1,372 mm) track gauge, that was adopted by early 19th-century railways mainly in the Lanarkshire area of Scotland. Also 4 ft 6 1⁄2 in (1,384 mm) lines were constructed. Both gauges were eventually converted to standard gauge.

As a result of Italian law, track gauges in Italy were defined from the centres of each rail, rather than the inside edges of the rails. This gauge was measured 950 mm (3 ft 1 3⁄8 in) between the edges of the rails and is known as Italian metre gauge 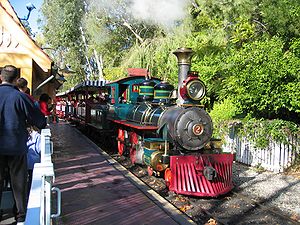 Three foot gauge railways have a track gauge of 3 ft (914 mm) and are generally found throughout North and South America, as well as Ireland and the Isle of Man. 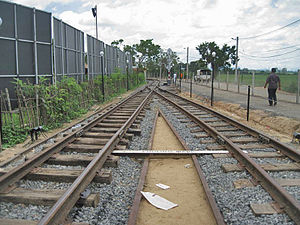 The Imperial 2 ft 6 in (762 mm) gauge railways were generally constructed in the former British colonies, such as the Kelani Valley Line (now 5 ft 6 in (1,676 mm)) in Sri Lanka. 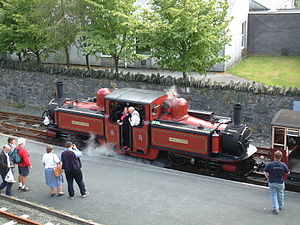 Gauges below 1 ft 11 1⁄2 in (597 mm) were rare, but did exist. In Britain, Sir Arthur Heywood developed 15 in (381 mm) gauge estate railways, while in France Decauville produced a range of industrial railways running on 500 mm (19 3⁄4 in) and 400 mm (15 3⁄4 in) tracks, most commonly in restricted environments such as underground mine railways, parks and farms. Several 18 in (457 mm) gauge railways were built in Britain to serve ammunition depots and other military facilities, particularly during World War I.