The Nassau Presbyterian Church is a historic congregation located at 61 Nassau Street in Princeton, New Jersey, United States. It has been the home of many important figures in the history of Presbyterianism in the United States as a result of its proximity to Princeton University and the Princeton Theological Seminary. The church operates the Princeton Cemetery and is a contributing property to the Princeton Historic District. The current pastor is The Reverend Dr. David A. Davis. 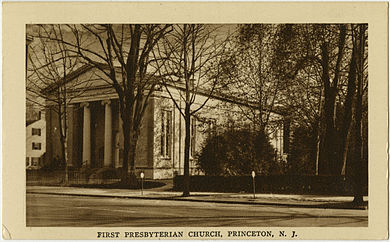 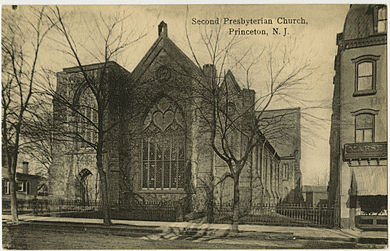 The Presbyterians of central New Jersey had two places of worship in either Lawrenceville or Kingston. In 1756 the College of New Jersey (now Princeton University) opened in Princeton and services were held in Nassau Hall. A few years later funds were collected to build a church to serve the growing population of students and teachers. The newly constructed First Presbyterian Church of Princeton opened in 1766. John Witherspoon, the President of the College, began his 25 years tenure as pastor of First Church in 1768.

As time progressed, divisions within the church occurred and the church spun off two local Presbyterian Churches. After the building burned down in 1835 church notes indicate that African-American members were encouraged to leave the congregation leading to the founding of Witherspoon Street Presbyterian Church.[3] Later that same decade the Second Presbyterian Church was chartered by those who sought a less formal worship style and desired different pastoral leadership. Efforts to merge the three congregations back into one were attempted at various times over the years including an effort led by Woodrow Wilson.

In the early 1970s, First Church and St. Andrews (the new name of Second Church) were without installed pastors. The churches decided to merge but were concerned about one church absorbing the other. The decision was made to create a new church out of the two (the Witherspoon Church was invited to the merger but declined) and Nassau Presbyterian Church was chartered in 1973. The initial congregation had 2,335 members with 1,759 and 576 coming from First and St. Andrew's, respectively.[4] The former building of St. Andrews was sold in 1978 to the a new church plant of the Assemblies of God, the Nassau Christian Center.[5]

The church is part of the national Presbyterian Church USA.