National Academy of Sciences of Ukraine

The National Academy of Sciences of Ukraine (Ukrainian: Національна академія наук України, Natsional’na akademiya nauk Ukrayiny, abbr: NAN Ukraine) is the highest research body in Ukraine, as a self-governing state-funded organization. It is the main research institution along with the five other academies specialized in various scientific disciplines. NAS Ukraine consists of numerous departments, sections, research institutes, scientific centers and various other supporting scientific organizations. The Academy reports on the annual basis to the Cabinet of Ministers of Ukraine.

The presidium of the academy is located at the following address vulytsia Volodymyrska, 57, across the street from the Building of Pedagogical Museum where used to preside the Central Council during the independence period of 1917-18.

Establishment of the Academy

The initiative to create such an institution came from the Ukrainian Science Society in April 1917 soon after the February Revolution. However it was finally materialized during the time of the Ukrainian State, when on the proposal of the Minister of Education and Arts Mykola Vasylenko a special commission was formed, which from July 9 - September 17, 1918 composed a legal document for the creation of the Academy. That document was approved by the Council of Ministers and signed by the Hetman of Ukraine Pavlo Skoropadsky on November 14, 1918.[1] At this point it was called the Ukrainian Academy of Science (UAS).

According to its original statute, the Academy consisted of three research departments in history and philology, physics and mathematics, as well as social studies. All publishing of academy was to be printed in the Ukrainian language. Its statute emphasized the all-Ukrainian nature: the members could be not only citizens of the Ukrainian State, but also the Ukrainian scientists of the West Ukraine (at that time citizens of Austria-Hungary). Foreigners could become academicians as well, but on the resolution of the 2/3 of the active members' composition.

The government of Ukraine provided funding to create research departments, institutes, and others. In its first year the Academy consisted of three departments within three institutes, 15 commissions, and the National Library.

Establishment of the Soviet Ukraine 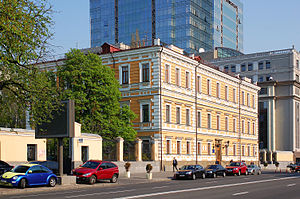 Presidium building of the National Academy of Sciences of Ukraine, former boarding house of countess Levashova

After overtaking Kiev on February 11, 1919, Bolsheviks issued a decree about structure and financing of the Academy. In the Soviet times that date was considered the establishment of the Academy of Sciences of the Ukrainian SSR. After several change of powers and withdrawal of the Denikin's forces in December 1919 the Bolsheviks permanently established themselves in Kiev. With the second arrival of Bolsheviks Vernadsky resigned. For the next couple of years the President of the Academy was elected Orest Levytsky. In 1921 Levytsky was replaced by a newly elected Mykola Vasylenko, however he was not approved by the authorities and soon was replaced with Levytsky. Vasylenko after that was arrested in 1923 and convicted (later released on amnesty). During that time the Academy moved to the boarding house of the countess Levashova.

On June 14, 1921, the Council of People's Commissars of Ukrainian SSR adopted a decree "Resolution on the Ukrainian Academy of Sciences", according to which the Academy was recognized as the highest scientific state institution and subordinated to the Narkom of Education. The Academy was renamed from UAS to VUAN (Ukrainian: ВУАН) as the All-Ukrainian Academy of Sciences underlining its meaning for the Ukrainian territories under Poland, Romania, Czechoslovakia and declaring its intentions to unite within one organization the scientific intelligentsiya of all Ukrainian lands. The relationship between the members of VUAN and the Soviet authorities soured, while the relationships with the Ukrainian scientists abroad had completely diminished. After the historian Orest Levytsky the President of the Academy became the botanist Volodymyr Ipolytyovych Lypsky. Between 1919-1930 to the Academy were elected 103 academicians. In 1924-5, the Academy held its first election for foreign members. However, none of the candidates were approved by the Narkom of Education.

In 1929, two of its members (Serhiy Yefremov and Mykhailo Slabchenko) and 24 corresponding agents (such as Osip Hermaize, Hryhoriy Holoskevych, Andriy Nikovsky, and others) were arrested in accusation to belonging to the non-existing (as later it was established) Union for the Freedom of Ukraine. None of the arrested have ever been released.

Like many other academies, it has a two-tier membership: academicians, and corresponding members. There is also an additional membership category for foreign members. It operates many research institutions, primarily in the fundamental sciences but also in the humanities. The Academy has "state-agency" status, but is self-governing in decisions relating to its own activities. The NASU is responsible for over 90% of all discoveries made in Ukraine, including the transmutation of lithium into helium, the production of heavy water, and the development of a 3-D radar that operates in the decimeter range.

The NASU has had only eight (8) different presidents:

On 2006, the NASU has a presidium, 3 sections and 14 departments within them, 6 regional science centers in various regions of the country, 173 research institutions across the nation, with 43,613 employees including 16,813 researchers; among them, 2,493 with degree of Doktor Nauk (Doctor of Sciences) and 7,996 with degree of Kandidat Nauk (Candidate of Sciences, Ph.D.). Currently, the sections and departments are:

The administrative body of the National Academy of Sciences of Ukraine that is located in Kiev. The presidium governs the work of the Academy in period between sessions of general assemblies of the Academy.

Members of the presidium include the president, four vice-presidents, chief secretary and secretary of departments, heads of regional science centers as well as some other distinguished academicians. The presidium meets in the former building of Countess Levashova that the Academy owns since its establishment in 1918.

The presidium also directs operations of the Academy's publishing institutions as well as some selected science and other institutions among which are own exposition center, Grand Conference Hall, etc.

The most of institutions of the Academy (212) are placed in the city of Kiev, following by Kharkiv (39) and Lviv (27). The Academy is represented at least by one institution in most of the oblasts in Ukraine, except Volyn, Rivne, Ternopil, Khmelnytsky, Vinnytsia, and Kirovohrad.

Establishments of the NASU

See also: List of establishments of the National Academy of Sciences of Ukraine

There are 2 national libraries affiliated with the NASU:

The department of General Biology includes a number of parks and nature reserves.

The NASU has two publishing houses:

The NASU has made major contributions to most of the major fields of science.

Today, the General Meetings of the NASU consist of 512 academicians and corresponding members along with 130 foreign members.

The Academy has awarded its Vernadsky Gold Medal annually since 2004 to the most distinguished academicians. Source: NASU