The current basis for the activities of NADA is the Law on Space Development, in 2013 the 7th session of the 12th Supreme People's Assembly was passed. The Act sets out the North Korean principles of peaceful development of space determines compliance with the principles of the Juche ideology (North Korean ideology) and independence, as well as the aim of solving scientific and technological problems of space to improve the economy, science and technology.

The law also regulates the position of the NADA and the principles of notification, security, research and possibly compensation in relation to satellite launches. The law calls for cooperation with international organizations and other countries, the principle of equality and mutual benefit, respect for international law and international regulations for space. The law also opposes the militarization of space.

The emblem of NADA consists of a dark blue globe with the word Kukgaujugaebalkuk (National Space Development Administration) in white Korean characters on the bottom, DPRK (Democratic People's Republic of Korea) in light blue characters on the top, the constellation of Ursa Major, NADA in white characters in the middle, and two bright blue rings symbolizing satellite orbits and the intention of place on all orbits of satellites. The logo is described as representing the agency's "character, mission, position, and development prospect". Ursa Major is intended to symbolize and glorify North Korea as a space power.[1][2]

The Western media point out that the logo strikingly resembles to NASA's logo — both with blue globes, white lettering, stars, and swooshed rings.[3][4][5] 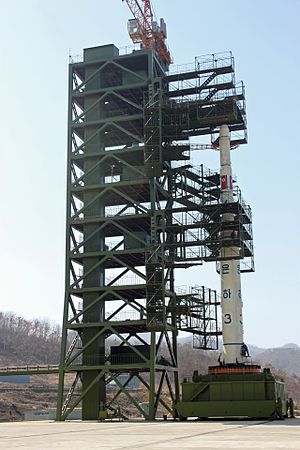 In 2009, North Korea entered to the Treaty on Principles Governing the Activities of States in the Exploration and Use of Outer Space, including the Moon and other celestial bodies in, and the Convention on Registration of Objects Launched into Outer Space Objects.[8]