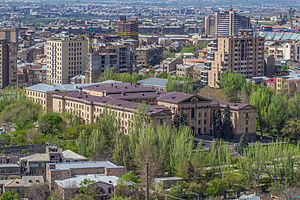 Aerial view of the building and premises

In Armenian history, national or secular assemblies were convened even in ancient times, but those differed a lot from what we know today. They were convened for adopting decisions on serious and decisive issues faced by the nation, as well as aiming to adopt rules regulating social relations. This is of course, very far from essential parliamentarianism, which is considered to be permanently processing representative legislator elected by people, but it includes its primary components, the alderman, deciding the people’s destiny, debating issues and adopted by voting critical decisions and rules for the nation and organizing constituent activity and set up relations according to them.

In Armenian history the concept of parliamentary governance was born at the end of 18th century. SH. Shahamiryan in the work “Vorogayt Pararts” (1773, Madras) for the first time formulated the main provisions on constitutional republic and parliamentary order.

The parliament of the first Republic of Armenia, declared on May 28 1918, was convened on August 1. A government was established, mainly from Dashnaktsakans. H. Kajaznuni was appointed as Prime Minister. In hard historical-political times, the Republic of Armenia, existing only two and a half years, was a country governed by parliamentary principles. The parliament was one chambered and had standing committees and a council of elders. The Government of the Republic was accountable to the legislative body - Parliament.

Four political factions formulated parliament - Armenian Revolutionary Federation(ARF), Social -Democratic Hnchakyan Party(SDP), Social Revolutionaries and People’s Party of Armenian. The Armenian Revolutionary Federation was a governing party, with a parliamentary plurality, while the others were in opposition. The Armenian Parliament, during its existence, adopted more than 1000 laws and legal documents, having power of law related to the inner and foreign policy of the Republic.

The Supreme Council of the Republic of Armenia began its work on July 20, 1990 and completed on May 15, 1995. 1169 decisions and 185 laws were adopted during that term, 104 of which were “basic” laws and 81 on making amendments and agenda to the laws in function. International 148 treaties were ratified.

The first convocation of The National Assembly of Armenia used to have 190 deputies, but this number was reduced to 131 for the second convocation and remains constant till now. Only political parties which overcome the barrier of 5% get seats in the Parliament. The number of those parties reached to 6 in the fifth convocation of the National Assembly of Armenia. The seats are divided as follows: “Republican Party of Armenia” (70 deputies), “Prosperous Armenia” (33 deputies), “Armenian National Congress” (7 deputies), “Rule of Law” (5 deputies), “Armenian Revolutionary Federation” (5 deputies), “Heritage” (4 deputies). After elections factions by the names of each party that got more than 5 % of the votes are created. There are also 6 deputies that do not belong to any party and 1 deputy that belongs to the “Free Democrats” party.

a) submits a conclusion to the National Assembly on the violation by a Deputy of the requirements of Paragraph 1 of Article 65 of the Constitution;

b) decides on the issue of violation by a Deputy of the rules of ethics foreseen by Paragraph 2 of Article 6.1 of the law of procedure of the National Assembly;

c) Decides on the failure by a Deputy to meet the requirement of Paragraph 3 of Article 6.2. of the law of procedure of the National Assembly on making a statement on conflict of interest;

d) Submits a conclusion to the Deputy on deeming the work indicated by him/her compatible with Article 24 of the Law of the Republic of Armenia on Public Service;

e) Submits a conclusion to a Deputy on the need to make a statement on conflict of interest on an issue indicated by him/her in the manner prescribed by Paragraph 3 of Article 6.2. of the law of procedure of the National Assembly.

Nomination and Registration of Candidates for Deputies

The Right to Nominate a Candidate for Deputy

Nomination for Candidates for Deputies by Proportional and Majoritarian Systems

1.Restrictions set forth by the Code extend onto him/her; 2.Documents submitted for his/her registration are falsified Central Electoral Commission denies the registration of a citizen in the party list by at least two/third vote of the total number of its members. In case of denial of registration of a party list, the sum of electoral deposit is paid back.

Candidates for the deputy of the National Assembly nominated by majoritarian system are registered by the decision of the Regional Electoral Commission. At least 45 days prior to the elections to the National Assembly, parties and initiative groups submit to the Regional Electoral Commission for registration of candidates by majoritarian system the following documentation. First of all there must be at least 500 signatures of voters residing in the given constituency, confirming the nomination. Then there must be receipt on payment of the electoral deposit in the amount of 100 times the amount of the minimum salary, reference on citizenship of the Republic of Armenia for the last five years and reference on permanent residence in the Republic of Armenia during the last five years.

The National Assembly is the legislative body of the Republic of Armenia. As it is stated in the article 71 of the Constitution: “The laws and resolutions of the National Assembly, save for cases set forth in the Constitution, shall be adopted by the majority of votes of the Deputies having participated in the voting provided that more than half of the total number of Deputies have voted.” The national assembly of Armenia is elected for a term of 5 years. Any person who is 25 and older, has Armenian citizenship and is living in Armenia for at least five years can be elected as a deputy. A deputy cannot be engaged in any entrepreneurial or other paid activity which is not considered as a scientific, educational and creative work according to the law on Social Service. A deputy, without the consent of the National Assembly may not be involved as an accused, detained or subjected to administrative liability through a judicial procedure and may not be arrested, unless caught in the act.

Today the library collection has about 9000 items, which consists of reference books, constitutions, laws, treats, conventions, legislation of Armenian, CIS and European countries, publications of National Statistical Service, materials dealing with the functioning with society, history, politics, international relations and economics, that is to say all materials relevant to the legislature's activity.

If the Library does not have a certain publication in its collections, it is possible to obtain it through interlibrary loans. The Library creates and maintains electronic database, which contains books, pamphlets, analytical descriptions from periodicals and newspapers, materials relevant to the work of Parliament, as well as materials concerning issues of future discussion. For users Library provides Internet access, photocopying. Librarians provide consultation of Library database and provide assistance with the search of information.

The building of the National Assembly of Armenia was constructed during 1948-1950. It was meant to be the building of the Central Committee of the Communist Party. In 1951 the architect of the Building was awarded with the State Prize of the USSR. On May 1991, according to the decision #314 of the Council of the Ministers of the RA on “Assigning the building, formerly used by the Central Committee of the Communist Party of Armenia to the Supreme Council”, the Building was assigned to the Supreme Council of the Republic of Armenia.

The building is built from light orange tuff, and is separated in the green environment and under the blue sky, giving her special beauty and expressiveness. The entrance of the building, with beautiful pillars on each side, is made of marble. The high, wide and bright corridors, the central and side stairs and the two elevators create a comfortable connection with the different parts and floors of the building. High quality wood and natural and artificial marble were used for the interior. The same was used also for the second subsidiary building.

The ceremony of the official opening of the reconstructed Sitting Hall of the National Assembly of the Republic of Armenia was held on October 22, 2010. Here every deputy has his/her place which cannot be changed. There is also a chair for the President, and a section for the Prime Minister and other ministers. The oval structure of the Sitting Hall is symbolic. It reminds of round-table debates. The choice of that structure is not by chance. From long ago the round table is considered a symbol of purposeful discussions for cooperation, as logically the interlocutors are acting not for personal struggles, but seeking a path for productive solutions of key problems.

Speakers of the National Assembly (1995-)