The National Bolshevik Party (NBP, Russian: Национал-большевистская партия, НБП, also known as the Natsbols, Russian: Нацболы) operated from 1994 as a Russian political party with a political program of National Bolshevism. The NBP became a prominent member of The Other Russia coalition of opposition parties.[1] Russian courts banned the organization: it never officially registered as a political party. In 2010, its leader, Eduard Limonov, founded a new political party, The Other Russia.[2] There have been smaller NBP groups in other countries.

The NBP often used direct-action stunts, mostly against prominent political figures. Its official publication, the newspaper Limonka, derived its name from the party leader's surname and from the idiomatic Russian word for a grenade. The main editor of Limonka for many years was ru.[3] 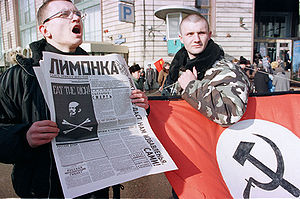 Members of the National Bolshevik party at a protest rally in Moscow with a copy of the Limonka newspaper. Photo by Mikhail Evstafiev.

The NBP historically defended Stalinism, although later on the party said it did not wish to re-create that system.[4] The NBP was highly critical of the Putin government and argued that state institutions such as the bureaucracy, the police and the courts were corrupt and authoritarian.[5]

The NBP had denied links to fascism, stating that all forms of antisemitism, xenophobia, and racism were against the principles of the party.[4] 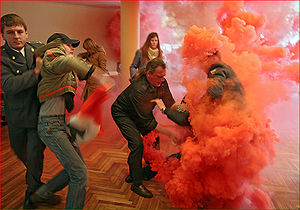 National Bolsheviks attack a polling station in Odintsovo, Moscow Oblast during the Russian legislative election, 2007 to protest the ban of the NBP.

In 1992, Eduard Limonov founded the National Bolshevik Front as an amalgamation of six minor groups.[6] Aleksandr Dugin was amongst the earliest members, and was instrumental in convincing Limonov to enter politics. The party first attracted attention in 1992 when two members were arrested for possessing grenades. The incident gave the NBP publicity for a boycott campaign they were organizing against Western goods.[7]

In 1992, the NBF joined the National Salvation Front coalition.[8] When others within the coalition began to speak out against the NBF, it withdrew from the alliance.[9] The resulting fallout led the NBP to produce a document entitled Limonov vs. Zhirinovsky, which criticized the leader of their former allies, the Liberal Democratic Party of Russia, stating that "a Jew masquerading as a Russian nationalist is a sickness, a pathology" (Zhirinovsky having a Jewish background).[10] Following the aborted alliance, the NBP attempted to reach a new deal with Russian National Unity in 1999, but this came to nothing.[11]

In 2001, Limonov was arrested with NBP members on charges of illegal purchasing of weapons. In 2003, Limonov was released from Lefortovo Prison.[12] On 2 August 2004, NBP members occupied the Ministry of Health in Moscow in order to protest the cancellation of social benefits. This was followed by a failed attempt at occupying Putin's office in December of the same year — an attempt that resulted in 30 arrests.[13]

In August 2006, an anti-Limonovist faction of the NBP that was more right-wing, anti-liberal, anti-leftist, anti-Kasparov and aggressively nationalist formed the National Bolshevik Front.[15] On 7 November 2006, police detained 27 NBP members after an office break-in on the eve of the celebration of the October Revolution.[16] In 2007, the NBP took part in a Dissenters' March and subsequent demonstrations against the Putin government.[17]

In 2009, NBP members took part in Strategy-31, a series of civic protests in support of the right to peaceful assembly.[18][19] In July 2010, NBP members founded a new political party, The Other Russia.[2] The NBP continued to organize, however, and in May 2011, NBP activists attacked the Embassy of Serbia in Moscow in solidarity with Ratko Mladić.[20][21]

Several small groups, often made up of Russian immigrants, named National Bolshevik Party have existed in countries across Europe and North America.[22] In Belarus, a Pentecostal church in Minsk was vandalised in 2006, with the NBP emblem drawn on its walls.[23] The NBP was not officially registered in the country. This followed a similar incident at the Latvian embassy in the city the previous year.[24] Latvia's NBP has had members hold office in Riga[25] and has executed notable publicity stunts, but remains largely marginal there.[26] The Latvian branch has been led by Vladimir Linderman and Aijo Beness.[27][28][29][30][31] In 2006, the Latvian NBP was active in anti-capitalist demonstrations and in blockades against Latvian SS veterans' parades during Latvian Legion Day.[32][33]

In Lithuania, National Bolsheviks appeared in 2005 in Visaginas and Klaipėda. One of their most notable actions was against education reform.[34] The Moldovan NBP was refused registration as a political party in 2005, so it registered as a non-governmental organization, with Transnistria as its main centre of activity.[citation needed] In Ukraine, the NBP joined other small parties in signing a Declaration of the Kiev Council of Slav Radical Nationalists in 1996, in an initiative led by the Ukrainian National Assembly.[35] The Ukrainian NBP, which was largely based in the east of the country, was active in anti-Ukrainian Insurgent Army (UPA)[36] and anti-NATO[37] demonstrations. During the Orange Revolution, the Ukrainian NBP did not support Viktor Yushchenko or Viktor Yanukovych.