From Infogalactic: the planetary knowledge core
Jump to: navigation, search
Not to be confused with the American Geographical Society.

The National Geographic Society (NGS), headquartered in Washington, D.C., United States, is one of the largest nonprofit scientific and educational institutions in the world. Its interests include geography, archaeology and natural science, the promotion of environmental and historical conservation, and the study of world culture and history. The National Geographic Society’s logo is a yellow portrait frame – rectangular in shape – which appears on the margins surrounding the front covers of its magazines and as its television channel logo. It also operates a website that features extra content and worldwide events. 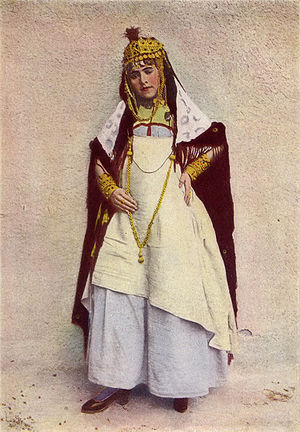 A dancer of the cafes, Algeria, 1917 photograph from National Geographic magazine

The National Geographic Society was founded in 1888 "to increase and diffuse geographic knowledge." The Society believes in the power of science, exploration and storytelling to change the world, and its purpose is to inspire, illuminate and teach. National Geographic is governed by a board of trustees, whose 21 members include distinguished educators, business executives, former government officials and conservationists.

The organization sponsors and funds scientific research and exploration. The Society publishes a journal, National Geographic (purchased by Rupert Murdoch in 2015) in English and nearly 40 local-language editions. It also publishes other magazines, books, school products, maps, and Web and film products in numerous languages and countries. Its Education Foundation gives grants to education organizations and individuals to improve geography education.[4] Its Committee for Research and Exploration has awarded more than 11,000 grants for scientific research and exploration.

National Geographic's various media properties reach more than 700 million people monthly.[5] National Geographic maintains a museum for the public in its Washington, D.C., headquarters. It has helped to sponsor popular traveling exhibits, such as an early 2010s King Tut exhibit featuring magnificent artifacts from the tomb of the young Egyptian Pharaoh; The Cultural Treasures of Afghanistan which opened in May 2008 and traveled to other cities for 18 months; and an exhibition of China's Terracotta Warriors in its Washington headquarters in 2009–10.

National Geographic has retail stores in Washington, D.C., London, Sydney, and Panama. The locations outside of the United States are operated by Worldwide Retail Store S.L., a Spanish holding company. 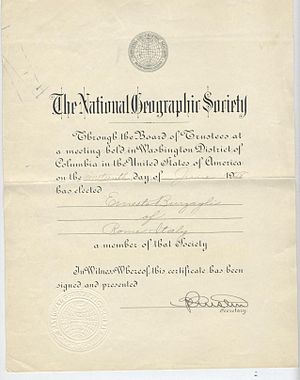 The diploma presented to Italian Admiral Ernesto Burzagli when he was awarded membership in the National Geographic Society in 1928.

The National Geographic Society began as a club for an elite group of academics and wealthy patrons interested in travel.[6] On January 13, 1888, 33 explorers and scientists gathered at the Cosmos Club, a private club then located on Lafayette Square in Washington, D.C., to organize "a society for the increase and diffusion of geographical knowledge." After preparing a constitution and a plan of organization, the National Geographic Society was incorporated two weeks later on January 27. Gardiner Greene Hubbard became its first president and his son-in-law, Alexander Graham Bell, succeeded him in 1897. In 1899, Bell's son-in-law Gilbert Hovey Grosvenor was named the first full-time editor of National Geographic magazine and served the organization for fifty-five years (until 1954), and members of the Grosvenor family have played important roles in the organization since. Bell and Gilbert Hovey Grosvenor devised the successful marketing notion of Society membership and the first major use of photographs to tell stories in magazines.

The current National Geographic Society president and CEO is Gary E. Knell. The chairman of the board of trustees is John Fahey. The editor-in-chief of National Geographic magazine is Susan Goldberg. Gilbert Melville Grosvenor, a former chairman of the Society board of trustees received the Presidential Medal of Freedom in 2005 for his leadership in geography education.

In 2004, the National Geographic Society headquarters in Washington, D.C., was one of the first buildings to receive a "Green" certification[7] from Global Green USA.[8] The National Geographic received the prestigious Prince of Asturias Award for Communication and Humanities in October 2006 in Oviedo, Spain.

On September 9, 2015, the Society announced that it would re-organize its media properties and publications into a new company known as National Geographic Partners, which will be majority-owned by 21st Century Fox with a 73% stake. This new, for-profit corporation, will own National Geographic and other magazines, as well as its affiliated television networks—most of which were already owned in joint ventures with Fox.[9] At the time of the deal’s announcement, James Murdoch, chief executive of 21st Century Fox, said in remarks to National Geographic that the pact created "an expanded canvas for the National Geographic brand to grow and reach customers in new ways, and to reach new customers."[3][10][11]

On November 2, 2015, roughly two weeks before the closing of the expanded joint venture deal,[11] National Geographic and 21st Century Fox announced that 9 percent of National Geographic's 2,000 employees, approximately 180 people, will be laid off, constituting the biggest staff reduction in the Society's history.[10]

As reported by The Guardian, a spokesman for National Geographic in a November 2, 2015 e-mail statement, briefly discussed the rationale for the staff reductions as part of the "... process of reorganizing in order to move forward strategically following the closing the National Geographic Partners deal, which is expected to occur in mid-November."[11]

Additional specifics were provided to Photo District News by M.J. Jacobsen, National Geographic’s SVP of communications, similar to the contents of a formal announcement by the two companies:[3][12] "The National Geographic Society and the National Geographic Channels are in the process of reorganizing in order to move forward strategically following the closing of the NG Partners deal (with Fox), which is expected to occur in mid-November," Jaobsen wrote. "Involuntary separations will represent about 9 percent of the overall workforce reduction, many in shared services and a voluntary separation offer has also been made to eligible employees," he added.

Specifics as to which departments would be affected were not immediately available but the Washington Post reported that the staff reduction appears to affect almost every department including the magazine and the National Geographic Channel.[10] 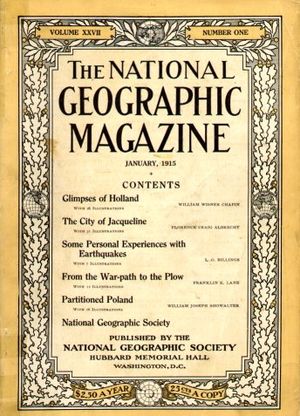 National Geographic Magazine, later shortened to National Geographic, published its first issue in October 1888, nine months after the Society was founded, as the Society's official journal, a benefit for joining the tax-exempt National Geographic Society. Starting with the February 1910 (Vol XXI., No. 2) issue, the magazine began using its now famous trademarked yellow border around the edge of its covers.

There are 12 monthly issues of National Geographic per year. The magazine contains articles about geography, popular science, world history, culture, current events and photography of places and things all over the world and universe. National Geographic magazine is currently published in 40 local-language editions in many countries around the world. Combined English and other language circulation is around 6.8 million monthly, with some 60 million readers.

In addition to its flagship magazine, the Society publishes several other periodicals:

National Geographic Channel, launched in January 2001, is a joint venture of National Geographic and Fox Cable Networks. It has featured stories on numerous scientific figures such as Jacques Cousteau, Jane Goodall, and Louis Leakey that not only featured their work but as well helped make them world-famous and accessible to millions. Most of the specials were narrated by various actors, including Glenn Close, Linda Hunt, Stacy Keach, Richard Kiley, Burgess Meredith, Susan Sarandon, Alexander Scourby, Martin Sheen, and Peter Strauss. The specials' theme music, by Elmer Bernstein, was also adopted by the National Geographic Channel. The National Geographic Channel has begun to launch a number of sub-branded channels in international markets, such as Nat Geo Adventure, Nat Geo Music, and Nat Geo Wild.

The National Geographic Partners expanded joint venture with 21st Century Fox (to be controlled by the latter) will be concluded in mid-November 2015 with the new for-profit organization to own a 73% stake of the NG affiliated television networks (National Geographic-branded cable TV channels),[15] most of which were already co-owned (with the percentage information not readily available), as per earlier joint ventures with Fox.[15]

Support for research and projects 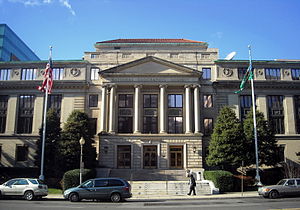 The Society has helped sponsor many expeditions and research projects over the years, including:

The Society supports many socially based projects including AINA, a Kabul-based organization dedicated to developing an independent Afghan media, which was founded by one of the Society's most famous photographers, Reza.

The Society also organizes the National Geographic Bee, an annual geographic contest for U.S. fourth- through eighth-graders. About 4 million students a year begin the geography competition locally, which culminates in a national competition of the winners of each state each May in Washington, D.C. Journalist Soledad O'Brien is the moderator of the Bee. She succeeded Alex Trebek, host of Jeopardy!, who moderated the final round of the competition for 25 years, from its inception in 1989 to 2013. Every two years, the Society conducts an international geography competition of competing teams from all over the world. The most recent was held in St. Petersburg, Russia, in July 2013, and had representatives from 19 national teams. The team from the United States emerged as the winner, with teams from Canada and India in second and third place. 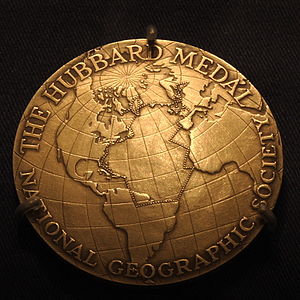 Not to be confused with IEEE Alexander Graham Bell Medal.

The National Geographic Society also awards, rarely, the Alexander Graham Bell Medal, for exceptional contributions to geographic research. The award is named after Alexander Graham Bell, scientist, inventor and the second president of the NGS. Up to mid-2011, the medal has been twice presented:[17][18]

Photos, maps, and other images