Order of the People's Hero

From Infogalactic: the planetary knowledge core
(Redirected from National Hero of Yugoslavia)
Jump to: navigation, search
For other uses, see People's Hero (disambiguation).

The Order of the People's Hero or the Order of the National Hero (depending on the translation; Serbo-Croatian: Orden narodnog heroja/Oрден народног хероја; Slovene: Red narodnega heroja, Macedonian: Oрден на народен херој) was a Yugoslav gallantry medal, the second highest military award, and third overall Yugoslav decoration.[1] It was awarded to individuals, military units, political and other organisations who distinguished themselves by extraordinary heroic deeds during war and in peacetime. The recipients were thereafter known as People's Heroes of Yugoslavia or National Heroes of Yugoslavia. The vast majority was awarded to partisans for actions during the Second World War. A total of 1322 awards were awarded in Yugoslavia, and 19 were awarded to the foreigners.[3]

In 1998, the Federal Republic of Yugoslavia decided to award the Order of the People's Hero again and decorated several military units, but no individuals.

The Order consists of an oval gold badge showing a soldier with rifle and banner superimposed upon a rayed star surrounded by a wreath of laurel. The badge is suspended from a red ribbon, with a narrow white stripe towards each edge. The design for this and the other Orders were undertaken by the painter Đorđe Andrejević Kun and the sculptor Antun Augustinčić. Before 29 November 1943, the title of People's Hero was awarded by the Central Comity of KPJ, after 1945 it was awarded by the Presidium of the People's Assembly of Yugoslavia, and starting in 1953 by the President of Yugoslavia.[4]

From its inception until around 1993, the Order had been awarded nearly 1,400 times. Marshal Josip Broz Tito was awarded the Order three times: in 1944, 1972 and 1977. The holders of the order were entitled to certain benefits, like free fares on public transport, and pensions for the surviving family members of deceased people's heroes. Although the benefits have since been downscaled, post-Yugoslav countries still provide certain benefits to people's heroes. Many schools and streets in post-war Yugoslavia were named after people's heroes, and many of the names remain, to varying degrees in different successor countries.

Not only people, but cities, military units and organizations were also awarded the order. Eight cities in Yugoslavia were awarded the order, and proclaimed Hero Cities: Beograd, Cetinje, Drvar, Ljubljana, Novi Sad, Prilep, Pristina and Zagreb.[4]

The Serbian media ridiculed several proposals to decorate Slobodan Milošević with the Order of the People's hero because he would have had to decorate himself.[5][6] It was never given to any individuals, but several military units active in the Kosovo War were decorated:[6] 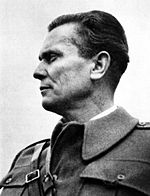 Notable recipients of the order include:

Foreign citizens recipients of the order

Vraca Memorial Park is located in Sarajevo, Bosnia and Herzegovina.

Public and political organizations recipients of the order 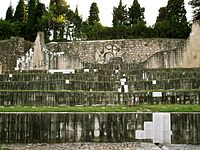 Partisan Memorial Cemetery in Mostar is located in Mostar, Bosnia and Herzegovina.

Tomb of the People's Heroes at Zagreb's Mirogoj cemetery. 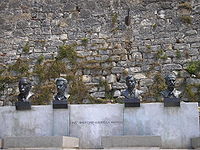 Most of the awarded were very young. Half of them joined the Army before the 25th birthday, and only 325 of them were over 30. 42% of the Heroes who died in the war were between 16 and 26 years old, 38% were between 27 and 34. Three Heroes were less than 17 years old when died. Milka Bosnić was the youngest recipient of the order, she was just 15 when killed during the Raid on Drvar.[3]

Most recipients were awarded in the years following the World War II, most of them between 1951 and 1953. Tito was the only person to be awarded multiple times, he was awarded the order three times. Of the 955 recipients who died in the war, 77% were killed in combat, about 15% was executed or died in prison, and about 7% died from wounds. Most of the Heroes died in 1943 (about 30%) and in 1942 (27.5%). Nine of them were killed after the war officially ended during the fight with remaining enemy forces. 55 People's Heroes committed suicide to escape arresting.[3]