The National Library of China (simplified Chinese: 中国国家图书馆; traditional Chinese: 中國國家圖書館; pinyin: Zhōngguó Guójiā Túshūguǎn) or NLC in Beijing is the national library of the People's Republic of China. With a collection of over 33,78 million items,[1][3] it is the largest library in Asia and one of the largest in the world. It holds the largest collections of Chinese literature and historical documents in the world.[4]

The forerunner of the National Library of China, the Imperial Library of Peking (京师图书馆; Jīngshī Túshūguǎn), was founded on 9 September 1909 by the government of the Qing dynasty. It was first formally opened after the Xinhai Revolution, in 1912. In 1916, the library received depository library status.[4] In July 1928, its name was changed to National Peiping Library and was later changed to the National Library. 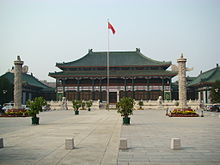 The original main buildings of the library, now (since 1987) the NLC Ancient Books Library that houses historical and ancient books, documents and manuscripts 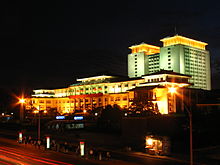 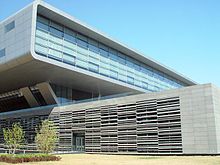 Inside view of the NLC North Area

Early references to public libraries were by Lin Zexu in the Sizhou Zhi (四洲志; 1839) and Wei Yuan in the Illustrated Treatise on the Maritime Kingdoms (first ed., 1843), both of which were translations from Western books.[5]

In the late nineteenth century, in response to several military defeats against western powers, the government of the Qing dynasty (1644–1912) sent several missions abroad to study western culture and institutions. Several members of the first Chinese diplomatic mission, which traveled to the United States, England, France, and other countries from 1868 to 1870, recorded their views of western libraries, noting that they attracted a large number of readers.[6] Journalist Liang Qichao (1873–1929), who became a prominent exiled intellectual after the failure of the Hundred Days' Reform in 1898, wrote about the Boston Public Library and the University of Chicago Library, praising their openness to the public and the virtue of readers who did not steal the books that had been lent to them.[7] Dai Hongci, a member of another Qing mission sent abroad to study modern constitutions, noted the efficacy of book borrowing at the Library of Congress.[8]

In 1906, the governor of Hunan province Pang Hongshu memorialized to the throne to announce he had completed preparations for the creation of a provincial library in Changsha.[9] In 1908 and 1909, high officials from the provinces of Fengtian, Shandong, Shanxi, Zhejiang and Yunnan petitioned the court asking for permission to establish public libraries in their respective jurisdictions.[9] In response, on 2 May 1909, the Qing Ministry of Education (Xuebu 学部) announced plans to open libraries in every province of the empire.[10]

On 9 September 1909 Zhang Zhidong, a long-time leader of the Self-Strengthening movement who had been viceroy of Huguang and was now serving on the powerful Grand Council, memorialized to request the foundation of a library in China's capital.[11] Foundation of the library was approved by imperial edict that same day.[12] The institution was originally called the Imperial Library of Peking or Metropolitan Library (京师图书馆; Jīngshī Túshūguǎn).

Philologist and bibliographer Miao Quansun (1844–1919), who had overseen the founding of Jiangnan Library in Nanjing two years earlier, was called in to administer the new establishment. As in Jiangnan, his assistant Chen Qingnian took charge of most of the management.[13]

A private proposal made by Luo Zhenyu in the early 1900s stated that the library should be located in a place protected from both fire and floods, and at some distance from noisy markets. Following these recommendations, the Ministry of Education first chose the Deshengmen neighborhood inside the northern city wall, a quiet area with lakes. But this plan would have required purchasing several buildings. For lack of funds, Guanghua Temple (广化寺) was chosen as the library's first site. Guanghua Temple was a complex of Buddhist halls and shrines located near the northern bank of the Shichahai, but inconveniently located for readers, and too damp for long-term book storage. The Imperial Library of Peking would remain there until 1917.[14]

The National Peking Library opened to the public on 27 August 1912, a few months after the abdication of Puyi (r. 1908–12), the last emperor of the Qing dynasty.[15] From then on, it was managed by the Ministry of Education of the Republic of China (1912–49).[15] The day before the library's opening, its new chief librarian Jiang Han (江瀚: 1853–1935) argued that the National Peking Library was a research library and recommended the opening of a new library with magazines and new publications that could attract a more popular readership.[16] In June 1913, such a Branch Library was opened outside Xuanwumen Gate, and more than 2,000 books were transferred there from the main library.[17] On 29 October 1913, because Guanghua Temple proved too small and inaccessible, the main library itself was closed, pending the choice of a new site.[18]

The Library charged one copper coin as a reading fee, whereas the Tianjin Library charged twice as much and the Shandong public library charged three coins.[19] At first, readers could not borrow books, but sometime before 1918 borrowing became allowed.[20]

After the Northern Expedition of Kuomintang in 1928, the National Peking Library changed its name to the National Peiping Library and served as the national library with the National Central Library in capital Nanking together. In 1931, the new library house in Wenjin Street near the Beihai Park opened.

After the People's Republic of China was officially established in October 1949 and Peking became its capital, the National Peiping Library was renamed National Peking Library. In 1951, the Ministry of Culture declared that its official English name would now be Peking Library.[21]

In October 1987, the Library moved to a modern building located north of Purple Bamboo Park in Haidian District.[22] In 1999, it was officially renamed the National Library of China.[23]

The National Library of China's collection is the largest in Asia.[4][24] Its holdings of more than 33,78 million items (by 2014) also make it one of the world's largest libraries.[3][25][26] It houses official publications of the United Nations and foreign governments and a collection of literature and materials in over 115 languages.[4] The library contains inscribed tortoise shells and bones, ancient manuscripts, and block-printed volumes.[27] Among the most prized collections of the National Library of China are rare and precious documents and records from past dynasties in Chinese history.

The original collection of the Metropolitan Library was assembled from several sources. In 1909 the imperial court gave the library the only surviving complete copy of the Siku Quanshu (Complete Books of the Four Treasuries), an enormous compilation completed in 1782 that had been made in only four copies. That copy had been held at the Wenjin Pavilion of the Imperial Summer Resort in Chengde.[11] On orders from the Qing Ministry of Education, the ancient books, archives, and documents of the Grand Secretariat were also transferred to the new library. So was the collection of the Guozijian or Imperial University, an institution that had been dismantled in 1905 at the same time as the imperial examination system.[28] These imperial collections included books and manuscripts dating to the Southern Song (1127–1279).[29] The content of three private libraries from the Jiangnan area were donated under the supervision of Duanfang, the viceroy of Liangjiang, and the Ministry arranged for the transfer from Gansu of what remained of the Dunhuang manuscripts. Finally, the court made great efforts to obtain rubbings of rare inscriptions on stone or bronze.[28] 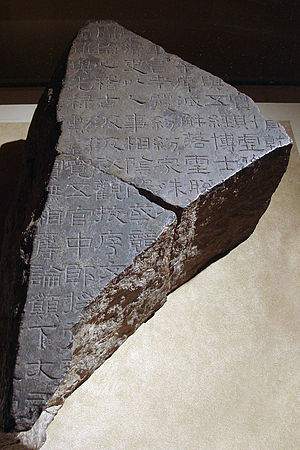 As of 2013, the Library maintains 14 branch offices, the latest of which is at the China Youth University for Political Sciences.[36]

The Main Library, located on Zhongguancun South Road in Beijing's Haidian District, can be accessed by bus or subway.[37]