National Security and Defense Council of Ukraine (Ukrainian: Рада національної безпеки і оборони України), is an advisory state body to the President of Ukraine, locally referred by its abbreviation RNBO[U].

It is a state agency tasked with developing a policy of national security on domestic and international matters in advising the President of Ukraine (currently Petro Poroshenko[2]). All the sessions of the council take place in the Presidential Administration Building. The council is currently headed by Oleksandr Turchynov.[3] 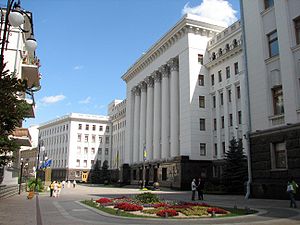 All the sessions of the council take place in the Presidential Administration Building.

On January 23, 1992 the President of Ukraine appointed Myroslav Vitovsky as a secretary of the Defense Council, a position which Vitovsky held until November 30, 1995.

After the establishment and elections of the President of Ukraine the composition of the council was reformed on April 9, 1992 by a provision of the Verkhovna Rada (Ukraine's parliament).[5]

The Council was originally created under temporary provision on July 3, 1992 as the National Security Council, but significantly revamped and strengthened under President Leonid Kuchma in 1994. The council was headed by a Presidential adviser in national security matters:

In June 2014 President Petro Poroshenko reshuffled the membership of the council.[2][nb 1]

If a President resigns, the Chairman of the Verkhovna Rada will be the acting head of the National Security and Defense Council.[6]