Native Hawaiians (Hawaiian: kānaka ʻōiwi, kānaka maoli, and Hawaiʻi maoli) are the indigenous Polynesian people of the Hawaiian Islands or their descendants.[4] Native Hawaiians trace their ancestry back to the original Polynesian settlers of Hawaii.

According to the U.S. Census Bureau report for 2000, there are 401,162 people who identified themselves as being "Native Hawaiian" alone or in any combination, but they are not considered Native Americans.[1] 140,652 people identified themselves as being "Native Hawaiian" alone.[2] The majority of Native Hawaiians reside in State of Hawaiʻi and the American Southwest. Two-thirds live in the State of Hawaii while the other one-third is scattered among other states, with a high concentration in California.

One hypothesis is that the first Polynesians arrived in Hawaiʻi in the 3rd century from the Marquesas and were followed by Tahitians in AD 1300, who conquered the original inhabitants. Another is that a single, extended period of settlement populated the islands.[5]

Evidence for a Tahitian conquest of the islands include the legends of Hawaiʻiloa and the navigator-priest Paʻao, who is said to have made a voyage between Hawaiʻi and the island of "Kahiki" (Tahiti) and introduced many customs. Early historians, Fornander and Beckwith, subscribed to this Tahitian invasion theory, but later historians, such as Kirch, do not mention it.[citation needed] King Kalakaua claims that Paʻao was from the South Pacific.

Some writers[which?] claim that other settlers in Hawaiʻi were forced back into remote valleys by newer arrivals. They claim that stories about the Menehune, little people who built heiau and fishponds, prove the existence of ancient peoples who settled the islands before the Hawaiians.[6]

At the time of Captain Cook's arrival, the population is estimated to have been between 250,000 to 800,000.[7][8] Over the span of the first century after first contact, the native Hawaiians were nearly wiped out by diseases introduced to the islands. Native Hawaiians had no resistance to influenza, smallpox, measles or whooping cough, among others. The 1900 U.S. Census identified 37,656 residents of full or partial native Hawaiian ancestry.[9] The 2000 U.S. Census identified 283,430 residents of Native Hawaiian or Pacific Islander ancestry, showing a dramatic growth trend since annexation by the U.S. in 1898.[10]

Hawaiian is still spoken as the primary language by the residents on the private island of Niʻihau.[citation needed] 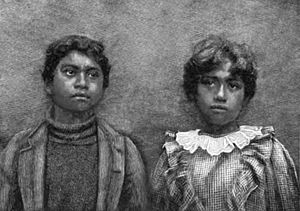 Hawaiian children are publicly educated under the same terms as any other children in the United States. In Hawaii, native Hawaiians are publicly educated by the Hawaiʻi State Department of Education, an ethnically diverse school system that is the United States' largest and most centralized. Hawaiʻi is the only U.S. state without local community control of public schools.[citation needed]

Under the administration of Governor Benjamin J. Cayetano from 1994 to 2002, the state's educational system established special Hawaiian language immersion schools. In these schools, all subject courses are taught in the Hawaiian language and use native Hawaiian subject matter in curricula. These schools were created in the spirit of cultural preservation and are not exclusive to native Hawaiian children.[citation needed]

Native Hawaiians are eligible for an education from the Kamehameha Schools, established through the last will and testament of Bernice Pauahi Bishop of the Kamehameha Dynasty. The largest and wealthiest private school in the United States, Kamehameha Schools was intended to benefit indigents and orphans, with preference given to native Hawaiians. Although the "Hawaiians-only" preference is not explicitly stated in her will, subsequent Bishop Estate trustees have interpreted her wording to mean that.[citation needed] Kamehameha provides a quality education to thousands of children of whole and part native Hawaiian ancestry at its campuses during the regular school year, and also has quality summer and off-campus programs that are not restricted by ancestry. Kamehameha Schools' practice of accepting primarily gifted students, in lieu of intellectually challenged children, has been a controversial topic amongst the native Hawaiian community. Many 'rejected' families feel that the gifted students could excel at any learning institution, public or private. Thus, the Hawaiian community may be better served by educating children from high-risk, high-crime districts so that a greater proportion of disadvantaged youths may grow up to be responsible community contributors.

As with other children in Hawaiʻi, some native Hawaiians are educated by other prominent private academies in the Aloha State. They include: Punahou School, Saint Louis School, Mid-Pacific Institute and Iolani School.

See also: Culture of the Native Hawaiians and Hawaii § Culture

Native Hawaiian culture has seen a revival in recent years as an outgrowth of decisions made at the 1978 Hawaiʻi State Constitutional Convention, held 200 years after the arrival of Captain Cook. At the convention, the Hawaiʻi state government committed itself to a progressive study and preservation of native Hawaiian culture, history and language.

Statutes and charter amendments were passed acknowledging a policy of preference for Hawaiian place and street names. For example, with the closure of Barbers Point Naval Air Station in the 1990s, the region formerly occupied by the base was renamed Kalaeloa.

Another important outgrowth of the 1978 Hawaiʻi State Constitutional Convention was the establishment of the Office of Hawaiian Affairs, more popularly known as OHA. Delegates that included future Hawaiʻi political stars Benjamin J. Cayetano, John D. Waihee III and Jeremy Harris enacted measures intended to address perceived injustices toward native Hawaiians since the overthrow of the Kingdom of Hawaiʻi in 1893. OHA was established as a trust, administered with a mandate to better the conditions of both native Hawaiians and the Hawaiian community in general. OHA was given control over certain public lands, and continues to expand its land-holdings to this day (most recently with Waimea Valley, previously Waimea Falls Park).[12]

Besides purchases since its inception, the lands initially given to OHA were originally crown lands of the Kingdom of Hawaiʻi used to pay the expenses of the monarchy (later held by the Provisional Government following the fall of the monarchy in 1893). Upon the declaration of the Republic of Hawaiʻi, they were officially designated as public lands. They were ceded to federal control with the establishment of the Territory of Hawaiʻi in 1898, and finally returned to the State of Hawaiʻi as public lands in 1959.

OHA is a semi-autonomous government body administered by a nine-member board of trustees, elected by the people of the State of Hawaiʻi through popular suffrage. Originally, trustees and the people eligible to vote for trustees were restricted to native Hawaiians. Rice v. Cayetano reached the United States Supreme Court suing the state to allow non-Hawaiians to sit on the board of trustees and for non-Hawaiians to be allowed to vote in trustee elections. Justices ruled in favor of Rice on 23 February 2000 forcing OHA to open its elections to all residents of the State of Hawaiʻi regardless of ethnicity.

In 1974, the Native American Programs Act was amended to include native Hawaiians. This paved the way for native Hawaiians to become eligible for some, but not all, federal assistance programs originally intended for Continental Native Americans. Today, Title 45 CFR Part 1336.62 defines a Native Hawaiian as "an individual any of whose ancestors were natives of the area which consists of the Hawaiian Islands prior to 1778."

There is some controversy as to whether or not native Hawaiians should be considered in the same light as Native Americans.[13][14]

On 23 November 1993, U.S. President Bill Clinton signed United States Public Law 103-150 also known as the Apology Resolution which had previously passed Congress. This resolution "apologizes to Native Hawaiians on behalf of the people of the United States for the overthrow of the Kingdom of Hawaii".[15]

In the early 2000s, the Congressional delegation of the State of Hawaiʻi introduced the Native Hawaiian Federal Recognition Bill that would establish the process of recognizing and forming a Native Hawaiian government entity to negotiate with state and federal governments. The significance of the bill is that it would establish, for the first time in the history of the islands, a new political and legal relationship between a Native Hawaiian entity and the federal government. This Native Hawaiian entity would be a newly created one without any historical precedent in the islands or direct institutional continuity with previous political entities (unlike many Native American Indian groups, for example).[citation needed]

This bill came under scrutiny by the Bush administration's Department of Justice as well as the United States Senate Judiciary Committee. The political context surrounding the Akaka Bill is both controversial and complex. Proponents, who consider the legislation an acknowledgement and partial correction of past injustices, include Hawaiʻi's Congressional delegation as well as the former Republican Governor Linda Lingle. Opponents include the U.S. Commission on Civil Rights who question the constitutionality of creating race-based governments, libertarian activists who challenge the historical accuracy of any claims of injustice, and other Native Hawaiian sovereignty activists who feel the legislation would thwart their hopes for complete independence from the United States.[citation needed]

A Ward Research poll commissioned in 2003 by the Office of Hawaiian Affairs reported that "Eighty-six percent of the 303 Hawaiian residents polled by Ward Research said yes. Only 7 percent said 'no,' with 6 percent unsure ... Of the 301 non-Hawaiians polled, almost eight in 10 (78 percent) supported federal recognition, 16 percent opposed it, with 6 percent unsure."[16] A Zogby International poll commissioned in 2009 by the Grassroot Institute of Hawaii indicated that a plurality 39% of Hawaiʻi residents opposed the Native Hawaiian Reorganization Act of 2009 and that 76% indicated that they were unwilling to pay higher taxes to cover any loss in tax revenues that might be incurred by the act.[17]

Ka Huli Ao focuses on research, scholarship, and community outreach. Ka Huli Ao provides a monthly lunch time discussion forum referred to as Maoli Thursday which is free and open to the public. Ka Huli Ao maintains its own blog as well as a Twitter account and a Facebook group. Ka Huli Ao also provides law students with summer fellowships. Law school graduates are eligible to apply for post-J.D. fellowships that last for one year. 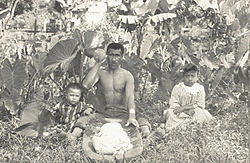 Hawaiian man with his two children, circa 1890.

Several cultural preservation societies and organizations have been established over the course of the twentieth century. The largest of those institutions is the Bernice Pauahi Bishop Museum, established in 1889 and designated as the Hawaiʻi State Museum of Natural and Cultural History. Bishop Museum houses the largest collection of native Hawaiian artifacts, documents and other information available for educational use. Most objects are held for preservation alone. The museum has links with major colleges and universities throughout the world to facilitate research.

With the support of the Bishop Museum, the Polynesian Voyaging Society's double-hulled canoe Hōkūle‘a has contributed to rediscovery of native Hawaiian culture, especially in the revival of non-instrument navigation by which ancient Polynesians originally settled Hawaiʻi.[18]

One of the most commonly known arts of Hawaii is hula dancing. It is an interpretive and expressive dance famous for its grace and romantic feel that expresses stories and feelings from almost any phase of life.