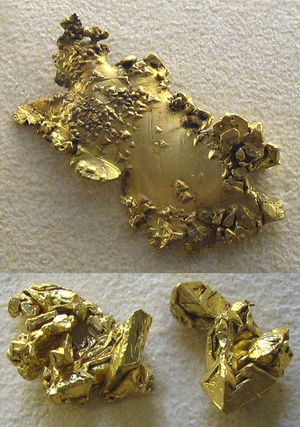 Chemical elements like gold are good candidates for natural kinds.

In analytic philosophy, the term natural kind is used to refer to a "natural" grouping, not an artificial one. Or, it is something that a set of things (objects, events, beings) has in common which distinguishes it from other things as a real set rather than as a group of things arbitrarily lumped together by a person or group of people.

If any natural kinds exist at all, good candidates might include each of the chemical elements, like gold or potassium. Physical particles, like quarks, might also be natural kinds. That is, they would still be groups of things, distinct from other things as a group, even if there were no people around to say that they were members of the same group. The set of objects that weigh more than 50 pounds, on the other hand, almost certainly does not constitute a natural kind. A person might group those objects together for some purpose like shipping costs, but there is no particular reason that any other person should lump those objects together instead of placing them in some other grouping.

A more formal definition has it that a natural kind is a family of "entities possessing properties bound by natural law; we know of natural kinds in the form of categories of minerals, plants, or animals, and we know that different human cultures classify natural realities that surround them in a completely analogous fashion" (Molino 2000, p.168). The term was brought into contemporary analytic philosophy by W.V.O. Quine in his essay "Natural Kinds", where any set of objects forms a kind only if (and perhaps if) it is "projectible", meaning judgments made about some members of that set can plausibly be extended by scientific induction to other members. Hence "raven" and "black" refer to concepts that match natural kinds, because any black raven constitutes at least some evidence that all ravens are black. But "nonblack" and "nonraven" are not, because a nonblack nonraven (an extremely wide category) is not evidence that all nonblack things are nonravens.[1] Nelson Goodman's problem predicate "grue", meaning "observed before 1 January 2050 and blue or observed after 1 January 2050 and green", turns out to be inappropriate because it does not denote a natural kind, according to Quine. He argued that kind-hood was logically primitive: it could not be reduced non-trivially to any other relation among individuals. See also New riddle of induction#Quine.

Cultural artifacts are not generally considered natural kinds. As one author puts it, "they never stop changing, and terms that designate them constitute only what Wittgenstein called 'family resemblance predicates'" (ibid, p.169). This point is more disputed; John McDowell has extensively argued that this opposition between "culture" and "nature" cannot be clearly formulated, and that in any case it ought to lead us to construing cultural products not as unnatural, but as, adopting Aristotle's terminology, a kind of "second nature."

There is considerable debate in analytic philosophy about whether there are any natural kinds at all, and if so, what they are. Philosophers of biology argue about whether biological species, like the bald eagle (Haliaeetus leucocephalus), are natural kinds; even such familiar species as bird, cat, and dog cannot be established as natural types, since any plausible definitions of those species leaves the classification of some animals ambiguous. Others debate whether races, sexes, or sexual orientations are natural kinds, or rather, to what extent they can be given the wide and continuous variety of race- and gender-related qualities. Meteorologists classify a number of different kinds of clouds, but it is not clear whether they are really different kinds, or whether those groups merely reflect the classifying interests of human beings - in order for them to classify as natural types, some clearly discrete circumstances would have to be shown to produce them in clearly distinguishable ways. The argument, however, is not so much about whether natural kinds exist or whether any of our current concepts succeed in defining true natural kinds, but rather why certain concepts result in more reliable theories and successful interactions with the world. One possible explanation is that it is because some concepts are better approximations of natural types than others, even if no perfectly discrete natural kinds exist and we can only hope to define concepts that classify reality with fewer marginal cases than others. In other words, the concept of the "natural type" may itself not refer to a natural type, but rather to an unattainable ideal that paradoxically leads to actions and decisions that achieve the best possible outcomes for human beings.

Language is often drawn into the debate as a complicating factor. Those who contest that language heavily shapes abstract thought, or even that it makes abstract thought possible, tend to argue that the coincidental properties of one's native language(s) will inevitably influence one's concepts and interfere with the recognition of natural kinds. Words that reference ideas, such as "love" and "honor", or that reference metaphysical concepts, such as "karma" and "noumenon", may be conceived of as not even attempting to refer to natural kinds as consistent delineations of objective reality. At the other extreme, a word may claim to refer to a natural kind in a dogmatic and infallible manner, leaving those who understand the word as such unable to recognize or understand evidence that defies their linguistic categories; for example, members of a culture that defines democracy as inherently good may be unable or unwilling to understand the fact that Athens voted to commit genocide on several occasions. The linguistic argument is that it is the way in which cultures inevitably bias words such as "democracy" (or, for that matter, "genocide") that makes us ultimately unable to apprehend natural types even if they did exist. Such approaches are associated with Hermeneutics and the family of subjectivist philosophies generally.