The Russian Naval Infantry, (Marines, Морская пехота, Morskaya Pekhota), or Russian Marines, is the amphibious force of the Russian Navy. The first Russian naval infantry force was formed in 1705, and since that time it has fought in the Napoleonic Wars, the Crimean War, the Russo-Japanese War, and the First and Second World Wars. Under Admiral Gorshkov, the Soviet Navy expanded the reach of the Naval Infantry and deployed it worldwide on numerous occasions.

The Marines are led by the Deputy Commander for Coastal Troops/Commandant of the Coastal Troops of the Russian Navy, Major General (NI) Aleksandr Kolpachenko. Their motto: "There, Where We Are, There is Victory!"

In November 1705, following a decree of Peter I, a regiment "of naval equipage" (морской экипаж) or in other words, equipped and supplied by the Russian Imperial Navy—was formed for boarding and landing operations, on the ships of the Baltic Fleet.

During the 18th century, Russian naval infantry was involved in several famous victories, including the Battle of Gangut (1714), the rout of the Turkish Navy at Cesme Harbor in 1770, and the taking of Izmail Fortress on the Danube, in 1790.

In 1799, during the Napoleonic Wars, Russian naval infantry took the French fortress at Corfu. In the same year, a Russian landing force took Naples by storm and entered the Papal States.

During the War of the Sixth Coalition, Russian naval infantry distinguished itself against La Grande Armée at the Battle of Borodino (1812), Battle of Kulm (1813) and the Siege of Danzig. 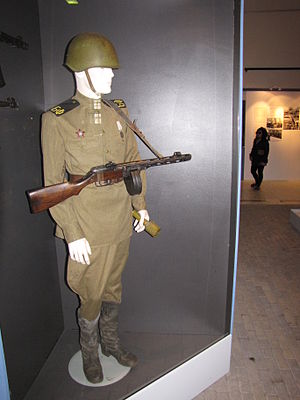 During World War II about 350,000 Red Navy sailors fought on land. At the beginning of the war, the navy had only one brigade of marines in the Baltic fleet, but began forming and training other battalions. These eventually were

The military situation demanded the deployment of large numbers of marines on land fronts, so the Naval Infantry contributed to the defense of Moscow, Leningrad, Odessa, Sevastopol, Stalingrad, Novorossiisk, Kerch.

The Naval Infantry conducted over 114 landings, most of which were carried out by platoons and companies. In general, however, Naval Infantry served as regular infantry, without any amphibious training.

They conducted four major operations: two during the Battle of the Kerch Peninsula, one during the Caucasus Campaign and one as part of the Landing at Moonsund, in the Baltic.

The Soviet experience in amphibious warfare in World War II contributed to the development of Soviet operational art in combined arms operations. Many members of the Naval Infantry were parachute trained; they conducted more drops and successful parachute operations than the VDV.

The Naval Infantry was disbanded in 1947, with some units being transferred to the Coastal Defence Force. 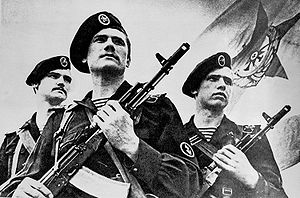 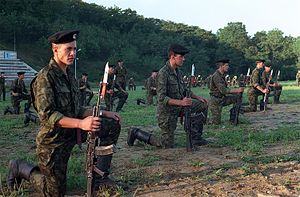 Soviet Naval Infantrymen during a demonstration in 1990.

By 1989, the Naval Infantry numbered 18,000 troops, organised into the 55th Naval Infantry Division, at Vladivostok and at least four independent brigades: the 63rd Guards Kirkenneskaya Brigade at Pechenga (Northern Fleet), 175th at Tumannyy in the North, 336th Guards Brigade at Baltiysk (Baltic Fleet), and 810th at Sevastopol (Black Sea Fleet).

By the end of the Cold War, the Soviet Navy had over eighty landing ships, as well as two Ivan Rogov-class landing ships. The latter could transport one infantry battalion with 40 armoured vehicles and their landing craft. (One of the Rogov ships has since been retired.)

At 75 units, the Soviet Union had the world's largest inventory of combat air-cushion assault craft. In addition, many of the 2,500 vessels of the Soviet merchant fleet (Morflot) could off-load weapons and supplies during amphibious landings.

On November 18, 1990, on the eve of the Paris Summit where the Conventional Armed Forces in Europe (CFE) Treaty and the Vienna Document on Confidence and Security-Building Measures (CSBMs) were signed, Soviet data were presented under the so-called initial data exchange. This showed a rather sudden emergence of three so-called coastal defence divisions (including the 3rd at Klaipėda in the Baltic Military District, the 126th in the Odessa Military District and seemingly the 77th Guards Motor Rifle Division with the Northern Fleet), along with three artillery brigades/regiments, subordinate to the Soviet Navy, which had previously been unknown as such to NATO.[3] Much of the equipment, which was commonly understood to be treaty limited (TLE) was declared to be part of the naval infantry. The Soviet argument was that the CFE excluded all naval forces, including its permanently land-based components. The Soviet Government eventually became convinced that its position could not be maintained.

A proclamation of the Soviet government on July 14, 1991, which was later adopted by its successor states, provided that all "treaty-limited equipment" (tanks, artillery and armoured vehicles) assigned to naval infantry or coastal defence forces, would count against the total treaty entitlement. 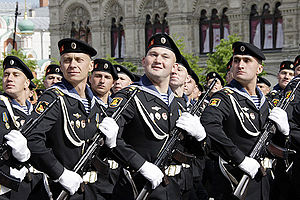 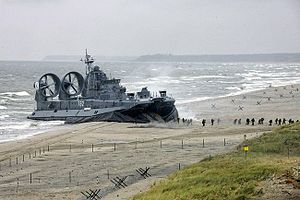 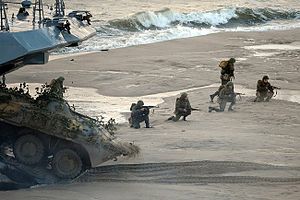 Russian Naval Infantrymen during the Zapad-2013 Strategic Exercise in Kaliningrad, 2013.

The Naval Infantry of the Russian Navy includes the 55th Naval Infantry Division of the Russian Pacific Fleet (55-я Дивизия Морской пехоты Тихоокеанского Флота), the independent brigades of the Northern and Baltic Fleets and of the Caspian Military Flotilla, and the independent regiment of the Black Sea Fleet. The main Arctic base of the Northern Fleet infantry is called Sputnik.

In 1994, Exercise "Cooperation from the Sea" was conducted, in and around Vladivostok, with the U.S. III Marine Expeditionary Force, to foster a closer relationship between the Russian Naval Infantry and the United States Marine Corps. U.S. Marines and Russian Naval Infantry conducted their first exercise on U.S. soil the following year, in Hawaii. "Cooperation From the Sea 1995" was a maritime disaster relief exercise, which included cross training and personnel exchanges, and culminated in a combined amphibious landing of U.S. and Russian marines. The purpose of the exercise was to improve interoperability, cooperation and understanding between U.S. and Russian personnel.

From 2000 onwards, the Caspian Flotilla included a new naval infantry brigade, the 77th, based at Kaspiysk. The headquarters and two battalions of the brigade were scheduled to be established by August 1, 2000.[4] It was reported by Agenstvo Voyenniykh Novostyei (AVN) in June 2000 that the new brigade, which may have inherited the lineage of the 77th Motor Rifle Division,[5][6] was to have its troops housed in Kaspiysk and Astrakhan, along with as many as 195 combat vehicles and two hovercraft sent to it from Chukotka and the Northern Fleet, respectively. The brigade was also reported to have had helicopters assigned to it. 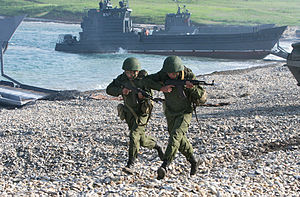 Russian Naval Infantrymen during the Vostok Strategic Exercise in Vladivostok, 2010. 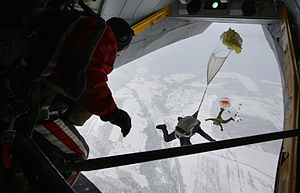 In 2014, the Naval Infantry were involved in the 2014 Russian military intervention in Ukraine.

In 2015, Ukrainian sources believed that Russian Naval Infantry played a key role in the Donetsk People's Republic (DPR) victory in the Second Battle of Donetsk Airport during the War in Donbass.[7][8]

In September 2015, it was estimated that approximately 800 Russian marines had taken up positions all along western Syria with the majority of them being stationed in the mountainous city of Slunfeh in east Latakia – the remaining marines had been moved to the Homs (Wadi Al-Nasara) and Tartous (Masyaf and Safita) Governorates in preparation for the Russian military intervention in the Syrian Civil War.[9]

On the night of 19/20 September 2015, Russian Naval Infantry engaged in a fight with militants of the Islamic State of Iraq and the Levant near the Syrian city of Latakia. The militants tried to mount an attack on the airbase there, however, they were ambushed by the marines. As a result of the clash, three militants were killed, two were captured, and the rest retreated.[10]

In November 2015, a Russian marine was killed during an operation to rescue the crew of a Russian Sukhoi Su-24M bomber aircraft that was shot down by the Turkish Air Force near the Syria–Turkey border. 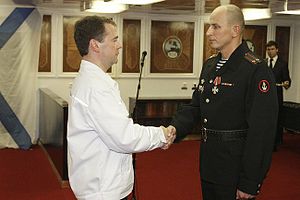 Russian President Dmitry Medvedev awarding the Order of Courage to Naval Infantry Lieutenant Colonel Oleg Kistanov on July 4, 2010 for his actions during the retaking of the Russian tanker "MV Moscow University" from Somali pirates. (Photo www.kremlin.ru)

A Marine Regiment, equipped with the PT-76 and BRDM-2, consists of 1 Tank Battalion and 3 Marine Battalions, one motorised with BTR-60-series amphibious vehicles.

A Marine Brigade, equipped with the PT-76 or T-80 and BRDM-2, consists of 2 Tank Battalions, and 4 to 5 Marine Battalions, one motorised with BTR-60-series amphibious vehicles. A tank battalion originally had 36 MBTs.

The Russian Naval Infantry have been gradually phasing out PT-76 amphibious tanks, but have not yet received a large number of T-80s. A full-strength Marine Brigade may have up to 70-80 Tanks. The APCs used by the Naval Infantry are either wheeled BTR-80s (in Assault Landing Battalions) or tracked MT-LBs (in Marine Battalions). While Naval Infantry units were supposed to receive BMP-3 IFVs, few have been delivered, and it is far from certain such re-arming will take place. BMP-3s may equip one company per Marine battalion.

In late February 2014, at least one Black Sea Fleet assigned unit (at company level) was apparently using Tigr armoured cars near Sevastopol during the 2014 Crimean crisis. During the crisis in March 2014 imagery emerged of some Naval Infantry personnel carrying what appeared to be the OTs-14-1A-04 7.62×39mm assault rifle with an under-barrel GP-30 40mm grenade launcher; a bullpup design normally associated with the Russian Airborne Troops, as well as Combat Engineering and Spetsnaz units.

Another signature weapon available to the Naval Infantry, though perhaps more associated with the Russian Navy itself, is the DP-64 anti-saboteur grenade launcher.

Heroes of the Soviet Union and the Russian Federation

Heroes of the Soviet Union

Heroes of the Russian Federation 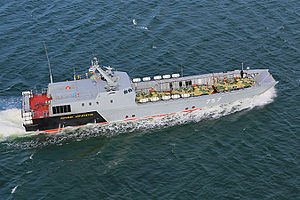 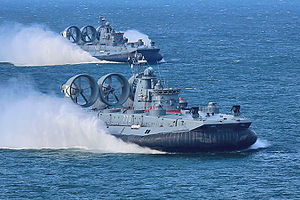 The Alligator tank landing ship and more modern Ropucha-class landing ship is a typical amphibious assault ship. Propelled by diesel engines, this ship is relatively small, displacing about 4,500 tons. In 1978, the Soviets launched a new amphibious ship, the Ivan Rogov. The advent of the Ivan Rogov was taken in the West as an indication that the Soviet Navy was planning to strengthen the power projection mission of Naval Infantry. Twice the size of earlier ships, it can launch amphibious vehicles from its open bow doors. It also carries helicopters. Among the various small assault landing vehicles to launch from the bow are hovercraft, such as the Aist, which can carry the naval infantry ashore at speeds of fifty knots.

The composition and the class of the main ships: