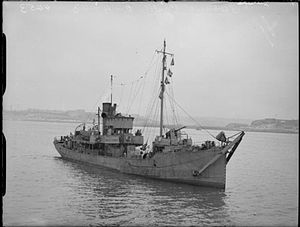 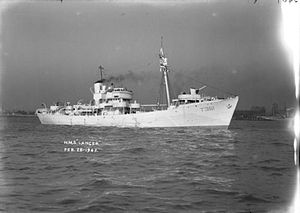 A naval trawler is a vessel built along the lines of a fishing trawler but fitted out for naval purposes. Naval trawlers were widely used during the First and Second World Wars. Fishing trawlers were particularly suited for many naval requirements because they were robust boats designed to work heavy trawls in all types of weather and had large clear working decks. One could create a mine sweeper simply by replacing the trawl with a mine sweep. Adding depth charge racks on the deck, ASDIC below, and a 3-inch (76 mm) or 4-inch (102 mm) gun in the bow equipped the trawler for anti-submarine duties.

Armed trawlers were also used to defend fishing groups from enemy aircraft or submarines. The smallest civilian trawlers were converted to danlayers.

The naval trawler is a concept for expeditiously converting a nation's fishing boats and fishermen to military assets. England used trawlers to maintain control of seaward approaches to major harbors. No one knew these waters as well as local fishermen, and the trawler was the ship type these fishermen understood and could operate effectively without further instruction. The Royal Navy maintained a small inventory of trawlers in peacetime, but requisitioned much larger numbers of civilian trawlers in wartime. The larger and newer trawlers and whalers were converted for antisubmarine use and the older and smaller trawlers were converted to minesweepers 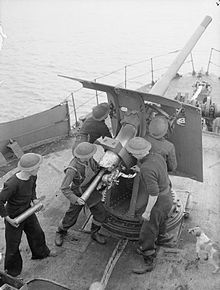 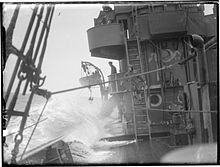 HMT Northern Sky pitching and rolling at slow speed along her patrol lines. Operating off Iceland this trawler made the last attack of the Second World War on a U-boat.

In the aftermath of the First World War, the Belgian Corps de Marine purchased several British war surplus naval trawlers. They were operational during the Battle of Belgium (1940) and one of them, A4, evacuated a large quantity of the National Bank's gold reserves to Britain shortly before Belgium's surrender.

As with Portugal, the RN had a number of trawler-type warships on order from Brazilian shipyards. With the declaration of war by Brazil against Germany in 1942 these vessels were transferred to the Brazilian Navy for anti-submarine and escort duties.[2]

The French navy also made use of trawlers requisitioned from civilian use during wartime. In the Second World War 480 trawler type vessels were in service as auxiliary mine-sweepers and a further 60 as auxiliary patrol vessels.[3]

During the Second World War the Kriegsmarine operated trawlers as Vorpostenboot (outpost boats) and as weather ships; the Lauenburg was an example. It also used a large number of Kriegsfischkutter, trawlers built specifically to be easily converted to naval uses such as anti-submarine warfare.

The Royal Indian Navy operated trawlers mostly for coastal defence; more than 50 Basset-class trawlers were ordered, but only 22 were completed with four more being destroyed before completion due to their shipyards being overrun by the Japanese in Burma. The remaining 25 were cancelled. The trawlers were used for coastal anti-submarine patrols and mine-sweeping duties.

As the Second World War progressed, Japan commandeered a number of fishing vessels for use as picket boats. To augment these, and to replace losses, the Imperial Japanese Navy also ordered a group of 280 picket boats, built on trawler lines but to Navy specifications. This was the No.1 class auxiliary patrol boat, though eventually only 27 were completed.

Norway had a large fishing and whaling fleet industry. For the Second World War the Royal Norwegian Navy made use of six converted whalers and 22 other fishing vessels as minesweepers and a further 10 as patrol craft.[4] The Royal Norwegian Navy also made use of a captured German naval trawler, taken as prize in April 1940 and put into service as HNoMS Honningsvåg. After the occupation of Norway the Free Norwegian forces made use of fishing vessels for their clandestine Shetland bus operations in support of the Norwegian resistance.

Though Portugal was neutral throughout the Second World War, a number of steel and wooden-hulled vessels were built to trawler design for the Royal Navy. These Portuguese-class naval trawlers were delivered in 1942, but further construction was halted after protests from Nazi Germany. Later, as Portugal became more closely involved with the western allies, Britain transferred a number of Isles-class trawlers to the Portuguese Navy as anti-submarine vessels.[5]

During the First World War, the Royal Navy operated 627 "Admiralty Trawlers" which had been purpose-built, purchased from foreign countries, or acquired as prizes. A further 1,456 trawlers were hired and operated, together with many other kinds of small vessel, by the Auxiliary Patrol.[6] Trawlers were mainly employed in minesweeping, anti-submarine patrols and as boom defence vessels.[7] Of the hired trawlers, 266 were lost while on active service.[6]

Before and during the Second World War, the Royal Navy ordered many naval trawlers to Admiralty specifications. Shipyards such as Smiths Dock Company that were used to building fishing trawlers could easily switch to constructing naval versions. As a bonus, the Admiralty could sell these trawlers to commercial fishing interests when the wars ended. Still, many were sunk during the war, such as HMT Amethyst and HMT Force. In 1940, Lieutenant Richard Stannard was in command of the naval trawler HMT Arab when he won the Victoria Cross for his actions from 28 April to 2 May 1940 at Namsos, Norway. HMT Arab survived 31 bombing attacks in five days.

More recently, during the Falklands War in 1982, the Royal Navy hired a flotilla of five trawlers from Kingston-upon-Hull, which were hastily converted to minesweepers, as the Ton-class minesweepers then in service were deemed to be unsuitable for the long voyage to the South Atlantic. Although employed with the Task Force on various other auxiliary duties, after the Argentine surrender, the trawlers were able to sweep 10 of the 21 naval mines which had been laid in Port Stanley harbour (the remaining mines failed to deploy or had broken adrift).[8]

The US Navy generally favoured custom-built warships to civilian conversions, but in the first months of World War II the acute shortage of vessels for coastal defence and anti-submarine work led to the formation of a mosquito fleet. As part of this, 20 steel-hulled trawlers and more than 40 wooden-hulled trawlers were commissioned as auxiliary minesweepers. (AM designation). These however were confined to coastal waters and not rated for offensive or convoy escort duties. A further 70 tuna clippers were called up as minesweepers (Amc designation), 10 as harbour patrol craft (YP) and 50 as coastal transports (Apc).[9] The United States Coast Guard requisitioned ten Boston fishing trawlers for the Greenland Patrol.[10]