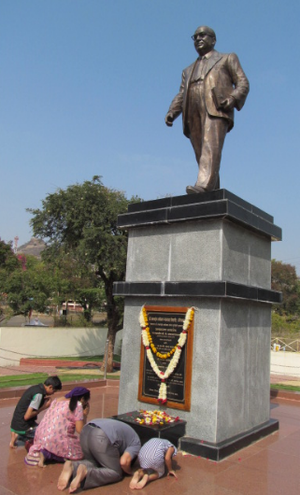 Navayana (Pali: नवयान navayāna, ‘new vehicle’) refers to the idea that a Buddhist movement may represent a new yāna, i.e. major branch of Buddhism, in addition to the traditionally recognized branches of Theravada, Mahayana and Vajrayana. This status has been claimed both for the Dalit Buddhist movement[1] as well as Western Buddhism.

I will accept and follow the teachings of Buddha. I will keep my people away from the different opinions of Hinyan and Mahayan, two religious orders. Our Bouddha Dhamma is a new Bouddha Dhamma, Navayan.

The American George Boeree (2002) writes about Navayana from a Western viewpoint:[3]

"Many of us, easterners and westerners, have been profoundly influenced by our study of Buddhism, and yet do not find ourselves attached to any one particular sect or interpretation of Buddhism. Further, many of us, especially westerners, find the fundamental ideas of Buddhism deeply meaningful, but cannot, without being dishonest with ourselves, accept certain other ideas usually associated with Buddhism. This leaves us with a somewhat ambiguous sense of who and what we are. [...]"

"We are heartened by the fact that Buddha himself seems to have considered arguments about cosmology and gods and the reality of life after death as irrelevant to the more immediate concern, which is the practice of the eight-fold path. It is, of course, a little presumptuous to say which of the many sutras are the ones we should pay attention to, and which should be considered some kind of later addition or modification. We will never know exactly what the Buddha said and did not say. We can only be “lights unto ourselves” and do the best we can."

"This by no means suggests that we look down upon other Buddhist orientations or that we have a better or purer understanding of Buddhist life. We only want to acknowledge our debt to the teachings of the Buddha. For this reason, I would like to recommend the term Navayana Buddhism (”new vehicle of awakening”) to all those who wish to so identify themselves."

Another definition comes from Christmas Humphreys, founder of the Buddhist Society in England, from his book Sixty Years of Buddhism in England (1906-1967):

"There is no reason why it should not grow happily alongside, and even blend with the best of Western science, psychology and social science, and thus affect the ever-changing field of Western thought. It will not be Theravada or Zen... Just what it will be we do not know, nor does it matter at the present time. The Dhamma as such is immortal, but its forms must ever change to server the ever-changing human need."