From Infogalactic: the planetary knowledge core
Jump to: navigation, search
This article is about Shaivite poets of Tamil Nadu. For the ethnic group, see Nayanar (Nair subcaste). 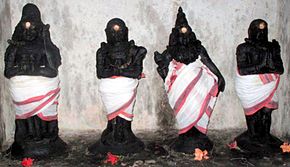 The Nayanars (alt. Nayanmars, Tamil: நாயன்மார்கள், lit. "hounds of Siva", later "teachers of Siva")[1] were a group of 63 saints (also saint poets) in the 6th to 8th century who were devoted to the Hindu god Shiva in Tamil Nadu. They, along with the Alvars, influenced the Bhakti movement in Tamil.[2] The names of the Nayanars were first compiled by Sundarar. The list was expanded by Nambiyandar Nambi during his compilation of material by the poets for the Tirumurai collection, and would include Sundarar himself and Sundarar's parents.

The list of the Nayanars was initially compiled by Sundarar (Sundararmurthi). In his poem, Tiruthonda Thogai, he sings, in eleven verses, the names of the Nayanar saints up to Karaikkal Ammeiyar,[2][3] and refers to himself as "the servant of servants".[4] The list did not go into the detail of the lives of the saints, which were described in detail in works such as Tevaram.[5]

In the 10th century, king Raja Raja Chola I collected Tevaram literature after hearing excerpts of the hymns in his court.[6] His priest Nambiyandar Nambi began compiling the hymns into a series of volumes called the Tirumurai. He arranged the hymns of three saint poets Sambandar, Appar and Sundarar as the first seven books which he called the Tevaram. He compiled Manikkavacakar's Tirukovayar and Tiruvacakam as the eighth book, the 28 hymns of nine other saints as the ninth book, the Tirumandiram of Tirumular and 40 hymns by 12 other poets as the tenth book. In the eleventh book, he created the Tirutotanar Tiruvanthathi (also known as Tirutoṇṭar Antādi, lit. Necklace of Verses on the Lord's Servants), which consisted of 89 verses, with a verse devoted to each of the saints. With the addition of Sundarar and his parents to the sequence, this became the canonical list of the 63 saints.[5] In the 12th century, Sekkizhar added a twelfth volume to the Tirumurai called Periya Puranam in which he expands further on the stories of each of 63 Nayanars.[3][2][1]

The Nayanars were from various backgrounds, including Channars, Vellalas, oilmongers, Brahmins, and nobles.[1] Along with the twelve Vaishnava Alvars, they are regarded the important saints from Tamil Nadu. 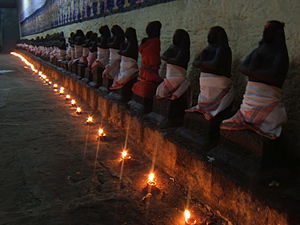 The 63 Nayanmars in a Shiva temple 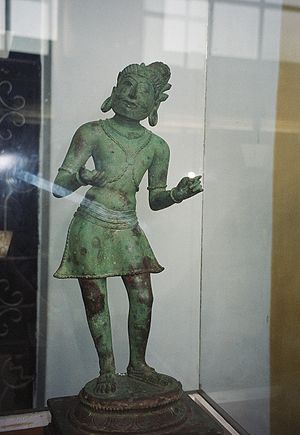 Sundarar's original list of Nayanars did not follow any sequence with regards to chronology or importance. However, some groups have since followed an order for arranging their Nayanar temple images according to Sundarar's poem as well as the information from Nambi and Sekkizhar.[3][7]

9th century poet Manikkavacakar was not counted as one of the 63 Nayanars but his works were part of the eighth volume of the Tirumurai.