The Nazi–Soviet population transfers were a series of population transfers between 1939 and 1941 of tens of thousands of ethnic Germans and ethnic Russians[citation needed] in an agreement according to the German–Soviet Treaty of Friendship, Cooperation and Demarcation between Nazi Germany and the Soviet Union.

One of Adolf Hitler's main goals during his rule was to unite all German-speaking people into one territory.[1] There were hundreds of thousands of ethnic Germans living outside the borders of Germany, mostly in Central and Eastern Europe with the largest numbers being Germans from Russia. Most of these groups of German origin had lived outside Germany for hundreds of years, after emigrating eastwards between the 12th to 18th centuries.

Despite this, Hitler planned to move these people westwards into Nazi Germany. However, Hitler also believed that the 1937 borders and territories of Nazi Germany, i.e. before the "Anschluss" (annexation) of Austria and Sudetenland, were quite inadequate to accommodate this large increase in population. At this time, propaganda for more Lebensraum or "living space" greatly increased.

With the largest number of ethnic Germans living in Russia, Hitler knew that he could not resettle all these people without the full cooperation of Joseph Stalin and the Soviet Union. In late August 1939 (a week before the invasion of Poland and the start of World War II) Hitler sent his foreign minister Joachim von Ribbentrop to Moscow to arrange a pact of non aggression with the Soviet Union. This became known as the Molotov–Ribbentrop Pact. In reality Hitler's aim was to avoid Germany fighting on two fronts when the Second World War was about to begin a week later.

The real issues agreed upon in the pact was the partition of territories in Central and Eastern Europe into German and Soviet spheres of influence and the reciprocal transfer of ethnic German and Russian people's to each other's countries.[2]

Hitler's plan was to invade the western part of Poland (having assigned the eastern part to the Soviet Union in the pact) and then force all non German peoples (mostly Polish citizens) out of their homes and either use them for forced labour or move them to the General Government area. Once these territories were "free" of non Germans, the population transfers could begin and ethnic Germans would be settled in the same homes that until a few weeks earlier had Polish citizens living in them. 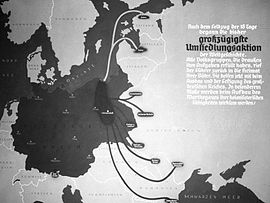 The planned transfers were announced to the ethnic Germans, and general knowledge, only in October 1939.[3]

The Nazis set out to encourage the departure of "Germans from outside Germany", called by the Nazis Volksdeutsche, from the Baltic States by the use of propaganda. This included using scare tactics about the Soviet Union, and led to tens of thousands leaving.[4] Those who left were not referred to as "refugees", but were rather described as "answering the call of the Führer."[3] To encourage support of this program, German propaganda films such as GPU[5] and Friesennot[6] depicted the Baltic Germans as deeply persecuted in their native lands.

Families were transported by ship from the Baltic states and by train from other territories.[3] The German government arranged the transfer of their furniture and personal belongings. All immovable property was sold, with the money being collected by the German government and not given back to the families.[7] This was an intentional act designed to destroy all links with the areas these people had been living in. The value of the real estate left behind was to be compensated in cash and Polish property in occupied Poland.

They were kept in camps for racial evaluation, to prevent contamination of the native German population.[8] There they were divided into groups: A, Altreich, who were to be settled in Germany and allowed neither farms nor business (to allow for closer watch), S Sonderfall, who were used as forced labor, and O Ost-Falle, the best classification, to be settled in the 'Eastern Wall' — the occupied regions to protect Germany from the East—and allowed independence.[9] This last group, after spending some time in refugee camps in Germany, were eventually resettled in Polish areas annexed by Nazi Germany and in Zamosc County, as decided by Generalplan Ost. The deportation orders required that enough Poles be removed to provide for every settler—that, for instance, if twenty German "master bakers" were sent, twenty Polish bakeries had to have their owners removed.[10] The settlers were often given Polish homes where the families had been evicted so quickly that half-eaten meals were on tables and small children had clearly been taken from unmade beds.[11] Members of Hitler Youth and the League of German Girls were assigned the task of overseeing such evictions to ensure that the Poles left behind most of their belongings for the use of the settlers.[12] Once they were settled, the process of Germanization was begun.[13]

Ethnic Germans were evacuated from territories occupied by the Soviet Union in 1940, notably Bessarabia and the Baltic states of Estonia and Latvia, all of which traditionally had large ethnic German minorities. However the majority of the Baltic Germans had already been resettled in late 1939, prior to the occupation of Estonia and Latvia by the Soviet Union in June 1940. In most cases they were given farms taken from 110,000 Poles who were expelled from the area [1].

Reichling's figures do not include parts of the more than 200,000 ethnic Germans from Yugoslavia who fled in the Fall of 1944 and who were directed into the General Gouvernment. It is not known how many actually arrived there.[citation needed]

For more details on this topic, see Flight and expulsion of Germans during and after WWII.

The Soviet advance into Poland in 1945 resulted in the ethnic German settlers being evacuated or fleeing from their "new homes" (in which Hitler had resettled them in 1939) to areas even further in the west to escape reprisals from the advancing Red Army. Considering that they had only been living in these homes for about 5 years at most, this was almost seen as a second forced resettlement for them (after the first in 1939) albeit under different circumstances. But this time practically all of them had to leave their belongings behind.