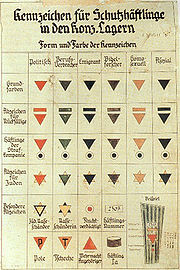 Nazi concentration camp badges, primarily triangles, were part of the system of identification in Nazi camps. They were used in the concentration camps in the Nazi-occupied countries to identify the reason the prisoners had been placed there.[1] The triangles were made of fabric and were sewn on jackets and trousers of the prisoners. These mandatory badges of shame had specific meanings indicated by their colour and shape. Such emblems helped guards assign tasks to the detainees: for example, a guard at a glance could see if someone were a convicted criminal (green patch) and thus likely of a "tough" temperament suitable for kapo duty. Someone with an "escape suspect" mark usually would not be assigned to work squads operating outside the camp fence. Someone wearing an F could be called upon to help translate guards' spoken instructions to a trainload of new arrivals from France. Some historical monuments quote the badge-imagery; the use of a triangle being a sort of visual shorthand to symbolize all camp victims. The modern day use of a pink triangle emblem to symbolize gay rights is a response to the camp identification patches.

The system of badges varied between the camps, and in the later stages of World War II, the use of badges dwindled in some camps, and became increasingly accidental in others. The following description is based on the badge coding system used before and during the early stages of the war in the Dachau concentration camp, which had one of the more elaborate coding systems.

Shape was chosen by analogy with the common triangular road hazard signs in Germany that denote warnings to motorists. Here, a triangle is called inverted because its base is up while one of its angles points down.

People who wore the green and pink triangles were convicted in criminal courts and may have been transferred to the criminal prison systems after the camps were liberated.[citation needed]

Like those who wore pink and green triangles, people in the bottom two categories would have been convicted in criminal courts.

Also, repeat offenders (rückfällige > "recidivists") would receive bars over their stars or triangles, a different colour for a different crime.

Many various markings and combinations existed. A prisoner would usually have at least two, and possibly more than six.

"Limited Preventative Custody" detainee ("Befristete Vorbeugungshaft" Häftling, or BV) was the term for general criminals (who wore green triangles with no special marks). They originally were only supposed to be incarcerated at the camp until their term expired and then they would be released. However, when the war began they were confined indefinitely for its duration.

Erziehungshäftlinge ("Reformatory Inmates") wore E or EH in large black letters on a white square. They were made up of intellectuals and respected community members who could organize and lead a resistance movement, suspicious persons picked up in sweeps or stopped at checkpoints, people caught performing conspiratorial activities or acts, and inmates who broke work discipline. They were assigned to hard labor for 6 to 8 weeks and were then released. It was hoped that the threat of permanent incarceration at hard labor would deter them from further mischief.

Polizeihäftlinge ("Police Inmates"), short for Polizeilich Sicherungsverwahrte Häftlinge ("Police Secure Custody Inmates"), wore either PH in large black letters on a white square or the letter S (for Sicherungsverwahrt - "Secure Custody") on a green triangle. To save expense, some camps had them just wear their civilian clothes without markings. Records used the letter PSV (Polizeilich Sicherungsverwahrt) to designate them. They were people awaiting trial by a police court-martial or who were already convicted. They were detained in a special jail barracks until they were executed.

Soviet prisoners of war (russische Kriegsgefangenen) assigned to work camps (Arbeitslager) wore two large letters, SU (for sowjetischer Untermensch - "Soviet Sub-Human") in yellow and had vertical stripes painted on their uniforms. They often performed hard labor and many died of neglect (untreated wounds, exposure to the elements, or starvation) or were shot out of hand before they could reach a camp. Many also joined Vlasov's Liberation Army to fight for the Germans.

Asoziale ("Anti-Socials") inmates wore a plain black triangle. They were considered either too "selfish" or "deviant" to contribute to society or were considered too impaired to support themselves. They were therefore considered a burden. This category included pacifists and conscription resisters, petty or habitual criminals, the mentally ill, and the mentally and / or physically disabled. They were usually executed or euthanized.

The Wehrmacht Strafbattalion ("Punishment Battalion") and SS Bewährungstruppe ("Probation Company") were military punishment units. They consisted of Wehrmacht and SS military criminals, SS personnel convicted by an Honor Court of bad conduct, and civilian criminals for which military service was either the assigned punishment or a voluntary replacement of imprisonment. They wore regular uniforms but were forbidden rank or unit insignia until they had proven themselves in combat. They wore an uninverted (point-upwards) red triangle on their upper sleeves to indicate their status. Most were used for hard labor, "special tasks" (unwanted dangerous jobs like defusing landmines or running phone cables) or were used as forlorn hopes or cannon fodder. The infamous Dirlewanger Brigade was an example of a regular unit created from such personnel.

A Strafkompanie ("Punishment Company") (SK) was a hard labor unit in the camps. Inmates assigned to it wore a black roundel bordered white under their triangle patch.

Prisoners "suspected of [attempting to] escape" (Fluchtverdächtiger) wore a red roundel bordered white under their triangle patch. If also assigned to hard labor, they wore the red roundel under their black Strafkompanie roundel.

A Prisoner-Functionary (Funktionshäftling), or Kapo ("boss"), wore a cloth brassard to indicate their status. They served as camp guards (Lagerpolizei), barracks clerks (Blockschreiber), and the senior prisoners at the camp (lagerältester), barracks (blockältester) and room (stübenältester) levels of camp organization. They received privileges like bigger (and sometimes better) food rations, better quarters (or even a private room), luxuries (like tobacco or alcohol), and access to the camp's facilities (like the showers or the pool). Failure to please their captors meant demotion and loss of privileges - and an almost certain death at the hands of their fellow inmates.

Detainees wearing civilian clothing (more common later in the war) instead of the striped uniforms were often marked with a prominent X on the back.[9] This made for an ersatz prisoner uniform. For permanence, such Xs were made with white oil paint, with sewn-on cloth strips, or were cut (with underlying jacket-liner fabric providing the contrasting color). Detainees would be compelled to sew their number and (if applicable) a triangle emblem onto the fronts of such X-ed clothing.[9]

Triangle-motifs appear on many postwar memorials to the victims of the Nazis. Most triangles are plain while some others bear nationality-letters. The otherwise potentially puzzling designs are a direct reference to the identification patches used in the camps. On such monuments, typically an inverted (point down, base up) triangle (especially if red) evokes all victims, including also the non-Jewish victims like Slavs, Poles, communists, homosexuals, Roma (see Porajmos), the handicapped (see Action T4), and Soviet POWs. An inverted triangle colored pink would symbolize gay male victims. A non-inverted (base down, point up) triangle and/or a yellow triangle is generally more evocative of the Jewish victims.