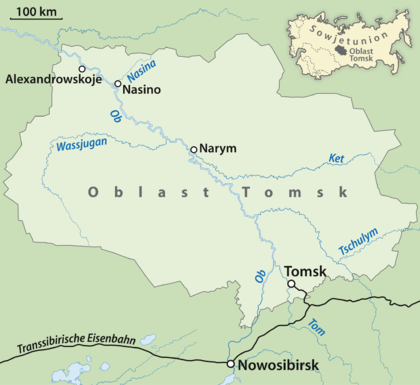 Map of the Nazino area

The Nazino affair was the mass deportation of 6,000 people, 4,000 of whom died, on Nazino Island (Russian: Остров Назино) in the Soviet Union in 1933. The small, isolated Western Siberian island is located about 800 km north of Tomsk, in Alexandrovsky District, Tomsk Oblast near the confluence of the Ob and Nazina Rivers.

It is called "Death Island" (Russian: Остров Смерти, Ostrov Smerti) or "Cannibal Island" because about 4,000 out of 6,000 Soviet "special settlers" died there during the summer of 1933, after being abandoned with only flour for food, few tools and little clothing or shelter.[1][2]

A report on the events was sent to Joseph Stalin by Vassilii Arsenievich Velichko. The report was distributed by Lazar Kaganovich to members of the Politburo, and was preserved in an archive in Novosibirsk.[3] It states that 6,114 "outdated elements" (also known as "déclassé and socially harmful elements" or classless people) arrived on the island in late May 1933. They had been transported from Moscow and Leningrad, first by train to Tomsk, then by river barge to Nazino. At least 27 people died during the river transport. There was no shelter on the island, it snowed the first night, and no food was distributed for four days. On the first day 295 people were buried.[4]

A special commission was then set up in September 1933 by the Regional Committee of the Communist Party of Western Siberia, with their reports published in 2002 by the group Memorial.[5][6]

In February 1933 Genrikh Yagoda, head of the OGPU or secret police, and Matvei Berman, head of the GULAG proposed a self-described "grandiose plan" to Stalin to resettle up to 2,000,000 people to Siberia and Kazakhstan in "special settlements." The deportees or settlers were to bring over a million hectares of virgin land into production, and become self-sufficient in two years.[8]

This plan was based on the experience of deporting 2,000,000 kulaks and other agricultural workers to the same areas in the previous three years. The resources available to support the plan were severely limited by the famine caused by the introduction of collective farms and dekulakization.[9]

The original plan targeted several types of kulaks, peasants, "urban elements," people living on the USSR's western frontiers, and petty criminals. By early Spring 1933 the number had been reduced to 1,000,000 deportees. Stalin rejected the plan in May 1933, about the time that deportees arrived on Nazino Island.[10]

Many of the deportees were people in Moscow and Leningrad who had been unable to obtain an internal passport. The passportization campaign began with a December 27, 1932 decision by the Politburo to issue internal passports to all residents of major cities. One of their objectives was to "cleanse Moscow, Leningrad and the other great urban centers of the USSR of superfluous elements not connected with production or administrative work, as well as kulaks, criminals, and other antisocial and socially dangerous elements."[11]

"Déclassé and socially harmful elements," that is former merchants and traders, peasants who had fled the famine in the countryside, petty criminals, or anybody who didn't fit into an idealized Communist class structure, were not issued passports, and they could be arrested and deported from the cities after a summary administrative procedure, where they were not present. Most of the arrestees were deported within two days.[12]

Between March and July 1933, 85,937 people living in Moscow were arrested and deported because they lacked passports; 4,776 people living in Leningrad were also deported. Those arrested in connection with the cleansing of Moscow prior to the May 1, 1933 May Day holiday were deported to the Tomsk transit camp, with many later being sent to Nazino Island.[13]

Velichko's report gave 22 examples of people who had been deported:

It is hard to tell how many, even who (died), because declared documents had been confiscated at the time of arrest, or by police organs at the detention centers, or on the train by criminals who used them to smoke. However, some of them brought their documents with them: party and party candidate cards, Komsomol cards, passports, certificates from the factories, factory passes, etc ... 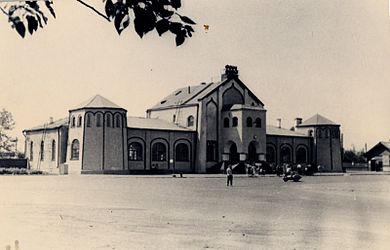 According to the plan of Yagoda and Berman the deportees would pass through transit camps at Tomsk, Omsk, and Achinsk. The largest camp was at Tomsk, which had to be rebuilt from scratch, starting in April to hold 15,000 deportees. 25,000 deportees arrived in April even though the camp was not scheduled to be completed until May 1. River transport to the final labor camps was closed until the start of May until ice on the Ob and Tom Rivers cleared. Most of the first arrivals were kulaks and other agricultural workers, and people from southern Russian cities. The arrival of so many deportees panicked Tomsk authorities, who viewed them as "starving and contagious."[15]

A rail convoy holding déclassé deportees left Moscow on April 30, and a similar convoy left Leningrad on April 29, with both arriving on May 10. The daily food ration during the trip was 300 grams of bread per person. Criminal groups among the deportees beat the other deportees and stole their food and clothing. The authorities in Tomsk were unfamiliar with urban deportees, and expected trouble from them, so decided to send them to the most isolated work sites. Two nights after their arrival in Tomsk a disturbance broke out, as they demanded drinking water, which was put down by mounted troops.[16]

Four river barges, which were designed to haul wood, were filled with about 5,000 deportees on May 14. About a third of the deportees were criminals who were sent in order to "decongest the prisons." About half were déclassé people from Moscow and Leningrad. The authorities in the Alexandro-Vakhovskaya komandatura, who were to be in charge of the labor camps, were first informed that they would be sent on May 5. These authorities had never worked with urban deportees and had no food, tools or supplies to support them.[17]

The deportees were kept below decks on the barges and apparently fed a daily ration of 200 grams of bread per person. Twenty tons of flour - about four kilos per person - were also transported, but the barges contained no other food, cooking utensils, or tools. All supervisory personnel, two commanders and fifty guards, were newly recruited. The guards had no shoes or uniforms.[18]

Life and death on Nazino Island

The barges unloaded their passengers during the afternoon of May 18, on Nazino Island, a swampy island about 3 km long and 600 meters wide. There was no roster of the disembarking deportees, but on arrival 322 women and 4,556 men were counted, plus 27 bodies of those who died during the trip from Tomsk. Over a third of the deportees were too weak to stand on arrival. About 1,200 additional deportees arrived on May 27.[19]

A fight broke out and guards fired on the deportees as the twenty tons of flour were deposited on the island and distribution began. The flour was moved to the shore opposite the island and distribution on the island was tried again the next morning, with another fight and more firing resulting. Afterward, all flour was distributed via "brigadiers" who collected flour for their brigade of about 150 people. The brigadiers were often criminals who abused their positions. There were no ovens to bake bread, so the deportees ate the flour mixed with river water, which led to dysentery.[20]

Some deportees made primitive rafts to try to escape, but most of the rafts collapsed and hundreds of corpses washed up on the shore below the island. Guards hunted and killed other escapees, as if they were hunting animals for sport. Because of the lack of any transportation to the rest of the country, except upstream to Tomsk, and the harshness of life on the Taiga, any other escapees were ultimately presumed dead.[21]

On May 21 the three health officers counted 70 new deaths, with the effects of cannibalism observed in five cases. Over the next month about 50 people were arrested for cannibalism. During early June, 2,856 deportees were transferred to smaller settlements upstream along the Nazina River, leaving just 157 deportees who could not be moved for health reasons on Nazino Island. Several hundred of the deportees died during the transfer; 1,500 – 2,000 deportees had died on the island, and hundreds of escapees had disappeared. People who survived the transfer found themselves with few tools, and little food in their new settlements, and there was an outbreak of typhus. Most deportees refused to work in the new settlements.[22]

In early July new settlements were constructed by the authorities using non-deportee labor, but only 250 settlers were transferred there. About 4,200 new deportees arrived from Tomsk and were housed in these settlements. According to Velichko’s letter to Stalin, on August 20 only 2,200 people survived out of about 6,700 deportees that he calculated had arrived from Tomsk. Velichko’s letter resulted in a commission to study the affair. In October the commission estimated that of 2,000 survivors, half were ill and bedridden, and only about 200 to 300 were capable of working.[23]

In 1988, at the time of Glasnost in the Soviet Union, details of the Nazino affair became available to the general public through the efforts of the group Memorial. [24]

They were trying to escape. They asked us "Where's the railway?" We'd never seen a railway. They asked "Where's Moscow? Leningrad?" They were asking the wrong people: we'd never heard of those places. We're Ostyaks. People were running away starving. They were given a handful of flour. They mixed it with water and drank it and then they immediately got diarrhea. The things we saw! People were dying everywhere; they were killing each other.... On the island there was a guard named Kostia Venikov, a young fellow. He was courting a pretty girl who had been sent there. He protected her. One day he had to be away for a while, and he told one of his comrades, "Take care of her," but with all the people there the comrade couldn't do much.... People caught the girl, tied her to a poplar tree, cut off her breasts, her muscles, everything they could eat, everything, everything.... They were hungry, they had to eat. When Kostia came back, she was still alive. He tried to save her, but she had lost too much blood.

The French historian Nicolas Werth, who earlier co-authored The Black Book of Communism, published the book Cannibal Island about the affair in 2006. It was translated into English in 2007. In 2009 a documentary L'île aux Cannibales (Cannibal Island) was made, based on the book.[26]