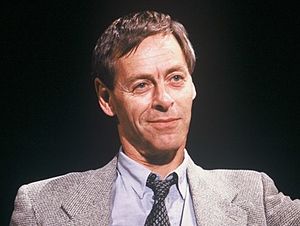 Appearing on television discussion programme After Dark in 1987

Ascherson was born in Edinburgh on 5 October 1932.[1] He was educated at Eton and King's College, Cambridge, where he read history and graduated with a triple starred first degree. The historian Eric Hobsbawm was his tutor at Cambridge and described Ascherson as "perhaps the most brilliant student I ever had. I didn't really teach him much, I just let him get on with it."[1]

After graduating he declined offers to pursue an academic career.[1] Instead, he chose a career in journalism, first at The Manchester Guardian and then at The Scotsman (1959–1960), The Observer (1960–1990) and The Independent on Sunday (1990–1998). He contributed scripts for the documentary series The World at War (1973–74) and the The Cold War (1998). He has also been a regular contributor to the London Review of Books.

Ascherson has lectured and written extensively about Polish and Eastern Europe affairs.[2][3]

As of 2016[update] Ascherson is a Visiting Professor at the Institute of Archaeology, University College London.[4] He has been editor of Public Archaeology, an academic journal associated with UCL devoted to CRM and public archaeology issues and developments, since its inception in 1999.[5]

In 1991 Ascherson was awarded an honorary degree from the Open University as Doctor of the University.[citation needed] On St Andrew's Day 2011 at their Anniversary Meeting the Society of Antiquaries of Scotland elected Ascherson an Honorary Fellow.

Neal Ascherson's first wife was Corrina Adam; the couple first met at Cambridge University and married in 1958. They had two daughters together before separating in 1974. The couple divorced in 1982.[6] Corinna Ascherson, also a journalist, died in March 2012.[6][7] In 1984, he married his second wife, the journalist Isabel Hilton.[1] The couple currently live in London and have two (now adult) children, Iona and Alexander. His aunt was the British actress Renée Asherson.[8]