From Infogalactic: the planetary knowledge core
Jump to: navigation, search
"The Unicameral" redirects here. For the general concept, see Unicameralism. For other uses, see Unicameral (disambiguation). 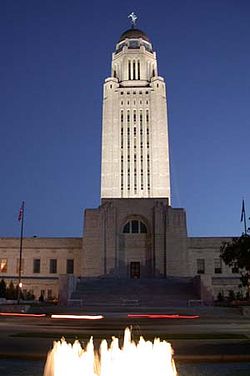 The legislature convenes at the Nebraska State Capitol.

The Nebraska Legislature (sometimes referred to as "the Unicameral")[1] is the supreme legislative body of the state of Nebraska, in the Great Plains region of the United States. The legislature is officially unicameral and nonpartisan, making Nebraska unique among U.S. states; no other state has either a unicameral or a nonpartisan legislative body. With 49 members, it is also the smallest legislature of any U.S. state.

The First Nebraska Territorial Legislature met in Omaha in 1855, staying there until statehood was granted in 1867.[2] Nebraska originally operated under a bicameral legislature, but over time dissatisfaction with the bicameral system grew. Bills were lost because the two houses could not agree on a single version. Conference committees that formed to merge the two bills coming out of each chamber often met in secret, and thus were unaccountable for their actions. Campaigns to consolidate the Nebraska Legislature into a single chamber date back as early as 1913, meeting with mixed success.[3]

After a trip to Australia in 1931, George Norris, then U.S. Senator for Nebraska, campaigned for reform, arguing that the bicameral system was based on the non-democratic British House of Lords, and that it was pointless to have two bodies of people doing the same thing and hence wasting money. He specifically pointed to the example of the Australian state of Queensland, which had adopted a unicameral parliament nearly ten years before. In 1934, voters approved a constitutional amendment to take effect with the 1936 elections, abolishing the House of Representatives and granting its powers to the Senate. The amendment was based on a bill to establish a unicameral legislature that had been introduced years earlier by Nebraska legislator and later U.S. Congressman John Nathaniel Norton.[citation needed]

Many possible reasons for the 1934 amendment's victory have been advanced: the popularity of George Norris, a fervent proponent of single-chamber government; the Depression-era desire to cut costs; public dissatisfaction with the previous year's legislature; or even the fact that, by chance, it was on the ballot in the same year as an amendment to legalize parimutuel betting on horse races.[4] This latter coincidence may have aided the measure's passage in Omaha, where the unicameral issue was not a pressing one but horse racing was. (Gambling interests campaigned for "yes" votes on all amendments in hopes of assuring the horse-racing amendment's passage.)

The new unicameral Legislature met for the first time in 1937. Though the name of the body is formally the "Nebraska Legislature", its members are commonly referred to as "senators". In Nebraska, the Legislature is also often known as "the Unicameral".

The Legislature is composed of forty-nine members, chosen by a single-member district or constituency. Senators are chosen for four-year terms, with one-half of the seats up for election every second year. In effect, this results in half the chamber being elected at the same time as the President of the United States, and the other half elected at the same time as other statewide elections. Senators must be qualified voters who are at least 21 years old and have lived in the district they wish to represent for at least one year. A constitutional amendment passed in 2000 limits senators to two consecutive terms. However, a former senator is re-eligible for election after four years. Senators receive $12,000 a year.

Members are selected in nonpartisan elections. Rather than separate primaries held to choose Republican, Democratic, and other partisan contenders for a seat, Nebraska uses a single nonpartisan primary election, in which the top two vote-getters are entitled to run in the general election. There are no formal party alignments or groups within the Legislature. Coalitions tend to form issue by issue based on a member's philosophy of government, geographic background, and constituency. However, almost all the members of the legislature are known to be either Democrats or Republicans, and the state branches of both parties explicitly endorse candidates for legislative seats.[5] As an illustration of how partisanship can intrude upon the officially nonpartisan chamber, in January 2010 it was reported that the Legislature debated whether or not there was partisanship in Legislature, and "then finished the talk with a vote that followed party lines."[6]

See also: List of Speakers of the Nebraska Legislature

The day-to-day matters of the body are dealt with by the Executive Board. The Board includes the Speaker, a chairman, a vice chairman, and six other senators. The chairman and vice chairman are chosen for two year terms by the entire legislature. The chairman of the Appropriations Committee serves, but cannot vote on any matter, and can only speak on fiscal matters.

Senators are classified into three geographically based "caucuses"; each caucus elects two board members.

Note: The Nebraska Legislature is nonpartisan; members' party affiliations are for informational purposes only.

* Speaker of the Nebraska Legislature