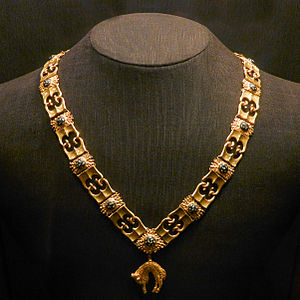 Chain of the Order of the Golden Fleece 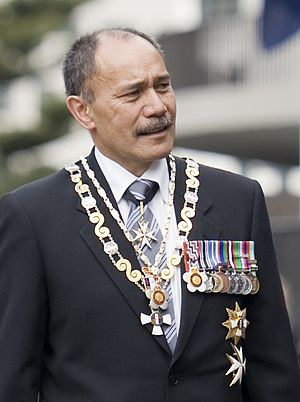 A neck order is a type of decoration which is designed to be worn and displayed around a person's neck, rather than hung (draped) from the chest as is the standard practice for displaying most decorations.

Most of the insignia of orders are issued in several degrees which typically include a neck order version for Commanders and Grand Officers. In countries which do not typically bestow orders with degrees, neck orders are still usually considered to be high-ranking decorations.

In the Middle Ages most orders were worn on a collar – see livery collar. Later, in the 17th century the insignia were worn hanging from a ribbon around the neck. When, in the late 18th century, orders were divided into several classes, the cross on a ribbon around the neck became the privilege of a commander. A decoration in that rank is usually awarded to high-ranking officials like brigadiers, consuls and secretaries of State.

A female usually wears her commander's cross on a bow on the shoulder of her dress.

In chivalric orders like the Order of Malta or the German Order the insignia of the knights is worn hanging from a ribbon around the neck. The same is true of the Order of the Golden Fleece.[1]

In the 19th century it was not unusual to wear a Grand Cross, normally hanging from a ribbon over the shoulder to the hip as a neck order when this was considered more convenient or when another Grand Cross was worn.

A number of nations confer honors which are signified in the form of an insignia on a collar or chain, including: 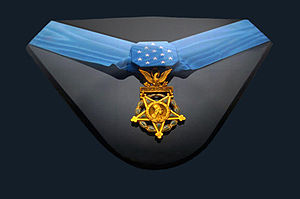 The Medal of Honor of the United States is worn hanging from a light blue neckband ribbon. 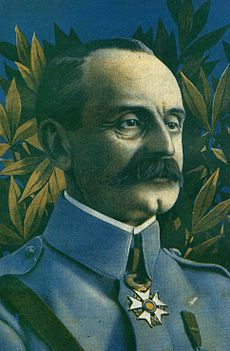 French World War I general fr (Maurice de Barescut), wearing the insignia of a Grand Cross of the Legion of Honour.

Some nations confer honors which are signified in the form of a badge which is worn suspended from a ribbon (also known as riband or ribband) around the neck, including: