The Dutch Reformed Church (Afrikaans: Nederduitse Gereformeerde Kerk, abbreviated NGK) is a Reformed Christian denomination in South Africa. It also has a presence in neighboring countries, such as Namibia, Swaziland, and parts of Botswana, Zimbabwe and Zambia.[1] It claims 1.1 million members and 1,602 ordained ministers in 1,158 congregations.[2]

Origins in the Cape Colony 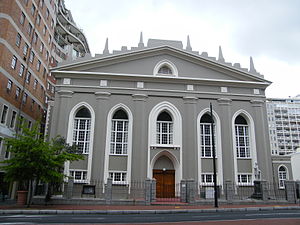 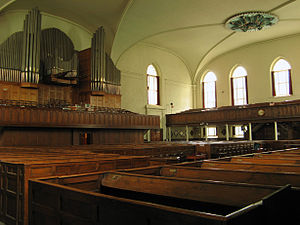 The interior of the Groote Kerk

When the Dutch East India Company sent Jan van Riebeeck to start a Dutch settlement at the Cape of Good Hope in 1652, most of the company's employees were members of the Dutch Reformed Church. At first there were no ordained ministers from the Netherlands but only a sick comforter. In 1665, Johan van Arckel arrived in the Cape Colony and became its first minister. A consistory was formed but was still subject to the control of the classis of Amsterdam.

In 1688, 200 Huguenot refugees arrived at the Cape. Though at first allowed to hold services in French, they were eventually assimilated into the Dutch-speaking population and became members of the Dutch Reformed Church, which had a monopoly in territory controlled by the company. An exception was eventually allowed for a Lutheran church in Cape Town (many of the company's employees were German).

During the Napoleonic Wars, the British occupied the Cape Colony in 1795 to prevent the French from doing so. The French had occupied the Netherlands, and so the link between the church in the colony and the Amsterdam classis was broken. The first British occupation was temporary, but in 1806 a long-term occupation was undertaken. For the next century, the colony would be under British control. Ministers from the Netherlands were not as willing to serve in what was now for them a foreign country, and the British authorities were not keen to have them. Presbyterian ministers from Scotland were encouraged to serve the needs of the Dutch Reformed Church in the Cape. The church was semi-established, and the government helped with stipends of ministers.

The colony had expanded a long way beyond the Cape Peninsula in the preceding two centuries, both to the north and the east, and on the eastern frontier the Dutch farmers came into contact with Xhosa-speaking cattle herders. There were conflicts over grazing and water and cattle rustling across the frontier. The frontier farmers did not like the way the government in Cape Town handled the situation, and the ending of slavery in 1834 was another bone of contention.

Afrikaner Calvinism was developing a different worldview to that of the British rulers, and many farmers left the Cape Colony in the Great Trek during the 1830s and 1840s. The Dutch Reformed ministers generally tried to discourage them and, as the Dutch Reformed Church was the established church of the colony, did not initially provide pastoral ministry for the emigrant farmers, who eventually formed several independent republics in present-day South Africa. Several of the republics in the land beyond the Vaal ("Transvaal") eventually merged to form the South African Republic in 1852.

Because the NGK was seen by the trekkers as being an agent of the Cape government, they did not trust its ministers and emissaries seeing them as part of the Cape government's attempts to regain political control. A minister from the Netherlands, Dirk Van der Hoff, went to the Transvaal in 1853 and became the first minister of the newly established Dutch Reformed Church (NHK), which became the state church of the South African Republic in 1860. 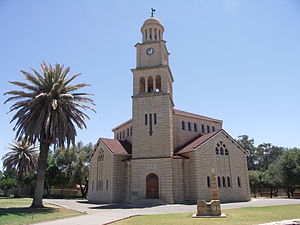 There were also religious divisions among the trekkers themselves. The more conservative ones (known as Doppers) were opposed to singing hymns that had not been determined to be scripturally pure in church. There was controversy in the Netherlands over hymn singing as well resulting in a group breaking away from the Dutch Reformed Church to form the Christian Reformed Churches. A minister from this group, fy (Dirk Postma), traveled to the South African Republic and was accepted as a minister of the NHK. After learning that he and his congregation could be required to sing these untested hymns, however, he and the Doppers broke away from the state church to form the Reformed Churches in South Africa (GK) in 1859. There were thus now three Dutch Reformed churches in what would become South Africa—the NGK (the Cape Synod), the NHK (the state church of the South African Republic), and the GK (led by Postma).

In the NGK meanwhile there was more controversy over theological liberalism and conservatism. An evangelical revival led by Andrew Murray tipped the balance away from theological liberalism. One result of the revival was that many young men felt called to the ministry, and a seminary was opened at Stellenbosch. The NGK was thus no longer dependent on getting its clergy from overseas, and as most of the recruits to the ministry had emerged from the revival this was the dominant element. One of its features was a kind of Reformed "Lent", between Ascension Day and Pentecost, a custom that eventually spread beyond the confines of the NGK.

The revival also led to an interest in mission work which led to the establishment of the Dutch Reformed Mission Church for coloureds and the Dutch Reformed Church in Africa for blacks. These were segregated entirely from the white churches, but eventually united to form the Uniting Reformed Church in Southern Africa. The NGK expanded from the Cape Colony, but in Natal and the two inland republics it set up separate synods that were at first loosely federated but later developed a closer relationship.

Following the Anglo-Boer War (1899-1902) the NGK played an important role in reconstruction and resisting the tendency of the British rulers to anglicise the Afrikaners. As the church ministers became increasingly involved in attempts to uplift the Afrikaner people, they also became politicised, and many became spokesmen for Afrikaner nationalism.

The Church supported Apartheid[3] and in 1982 was expelled from the World Alliance of Reformed Churches which declared Apartheid to be a sin.[4]

Theologically, the Dutch Reformed Church is in the Reformed branch of Protestantism. It holds the Bible as authoritative Word of God by which all doctrine is judged. It has three doctrinal standards: the Belgic Confession, the Heidelberg Catechism, and the Canons of Dordt.[7]

The NGK has a presbyterian polity with power divided between synods, presbyteries, and church councils. Church councils govern local congregations. Local churches are organised geographically into 146 presbyteries ("rings") which are further organized into synods. Every four years, the 10 synods come together and meet as the General Synod. The office of the General Synod is in Pretoria, Gauteng Province.[2]

There are ten synods, whose borders roughly resemble those of the provinces of South Africa plus Namibia. They are:

Individual church councils may decide for themselves how specific actuality issues that are not dealt with in the six officially accepted confessions of faith are dealt with within the congregation. This can lead to widely differing approaches on issues such as marriage, gambling, sexuality, sins in general, social issues, etc. between congregations. Both the General Synod and the regional synods may pronounce an official statement on certain issues, which local church councils broadly follow. There can be marked differences between the synods with regard to social issues.

When an issue has a wide range of opinions, the synods and the General Synod releases "discussion documents" which are intended to move the opinion of congregations in some direction. 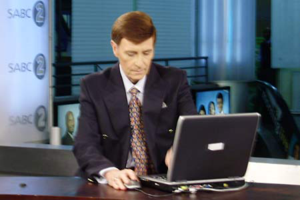 Riaan Cruywagen reads the news: Being gay: punishment or blessing? – Documentary film on the life and work of theologian Dr. Hendrik Pretorius on SABC Network.

Milestone decisions about homosexuality were taken in 1967, 1982, 1986, 2004 and 2015. The 1986 and 2004 decisions were broadly similar to each other, though the 2004 decision was worded with more compassion. The 2015 decision was dramatically different, and was reported in the media under headings such as "Gays now welcome in NG Church", even though strictly speaking homosexuals had been welcome since 1982.

Traditionally, and certainly prior to the end of Apartheid, the NG Church held the view that homosexuality is a mental health issue or a sinful state of being. No distinction was made between homosexuality and homosexual activity, as both were regarded as either a psychological illness or a deliberate decision to sin.

The 2004 decision was formally withdrawn in 2015. The 2015 General Synod decided that sex outside of marriage is no longer sinful, as long as both partners live good Christian lives and are committed to each other. This applies to both homosexuals and heterosexuals. The church recognises South African civil unions, but does not regard legal marriage between homosexuals as Biblical marriage — instead, the church regards legally married homosexuals as simply having a formalised, committed sexual relationship.[11]

Prior to 1994, the church's view on abortion was broadly aligned with South African legislation, namely that forced abortion was only acceptable if there was immediate danger to the mother's life, or if the conception was due to rape that had been reported to the police.

The 1982 General Synod declared that abortion is indefensible on both Biblical and scientific grounds, and that abortion is always "the termination of a life".[12] The church believes that life begins at conception, and that using contraceptives that cause a fertilised ovum to be expelled is therefore also sinful.[13]

At the 1986 General Synod, a proposal was considered to draw up a list of exceptional cases in which abortion might be allowable. After consultation with experts, including medical experts, the synod decided to base their stance on abortion solely on the Bible and not on medical evidence or on a list of exceptions.

The church's current decision on abortion was taken at the 1994 General Synod. The church regards all types of abortion as sinful, including involuntary abortion. However, in cases where abortion is "unavoidable", it is sufficient that the mother protest against the abortion, confess her guilt, and feel genuine remorse.[14] Assisting in an abortion is also sinful.[15]

An official publication from 1999, "Geloofsverklaring", which deals with various actuality issues, stated however that while abortion on demand is morally indefensible, abortion should not be denied in cases where it is the "lesser of two evils".[16]