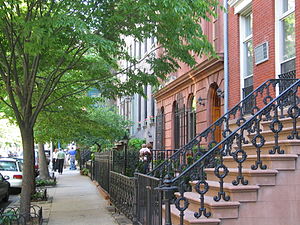 The Meatpacking District neighborhood of Manhattan in New York City

A neighbourhood (Commonwealth English), or neighborhood (American English), is a geographically localised community within a larger city, town, suburb or rural area. Neighbourhoods are often social communities with considerable face-to-face interaction among members. "Researchers have not agreed on an exact definition. Neighbourhood is generally defined spatially as a specific geographic area and functionally as a set of social networks. Neighbourhood, then, are the spatial units in which face-to-face social interactions occur—the personal settings and situations where residents seek to realise common values, socialise youth, and maintain effective social control."[1] The Old English word for "neighbourhood" was neahdæl.[2]

In the words of the urban scholar Lewis Mumford, “Neighbourhoods, in some primitive, inchoate fashion exist wherever human beings congregate, in permanent family dwellings; and many of the functions of the city tend to be distributed naturally—that is, without any theoretical preoccupation or political direction—into neighbourhoods.” [3] Most of the earliest cities around the world as excavated by archaeologists have evidence for the presence of social neighbourhoods.[4] Historical documents shed light on neighbourhood life in numerous historical preindustrial or nonwestern cities.[5]

Neighbourhoods are typically generated by social interaction among people living near one another. In this sense they are local social units larger than households not directly under the control of city or state officials. In some preindustrial urban traditions, basic municipal functions such as protection, social regulation of births and marriages, cleaning and upkeep are handled informally by neighbourhoods and not by urban governments; this pattern is well documented for historical Islamic cities.[6]

Neighbourhoods in preindustrial cities often had some degree of social specialisation or differentiation. Ethnic neighbourhoods were important in many past cities and remain common in cities today. Economic specialists, including craft producers, merchants, and others, could be concentrated in neighbourhoods, and in societies with religious pluralism neighbourhoods were often specialised by religion. One factor contributing to neighbourhood distinctiveness and social cohesion in past cities was the role of rural to urban migration. This was a continual process in preindustrial cities, and migrants tended to move in with relatives and acquaintances from their rural past.[9]

Neighborhoods have been the site of service delivery or "service interventions" in part as efforts to provide local, quality services, and to increase the degree of local control and ownership.[10] Alfred Kahn, as early as the mid-1970s, described the "experience, theory and fads" of neighborhood service delivery over the prior decade, including discussion of income transfers and poverty.[11] Neighborhoods, as a core aspect of community, also are the site of services for youth, including children with disabilities [12] and coordinated approaches to low-income populations.[13] While the term neighborhood organization [14] is not as common in 2015, these organizations often are non-profit, sometimes grassroots or even core funded community development centers or branches.

Urban sociology even has a subset termed neighborhood sociology which supports the study of local communities [17] and the diversity of urban neighborhoods.[18] Neighborhoods are also used in research studies from zip codes and health disparities, to correlations with school drop out rates or use of drugs.[19] Central yet today are "community values" which have changed dramatically in larger cities, and sometimes not as much in rural regions of the USA; these values are reflected and shaped in part by the media bridging the gap between citizens and government.[20] 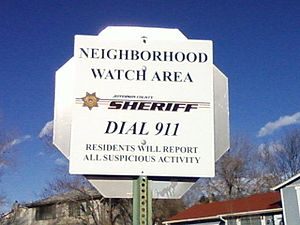 Neighbourhoods have several advantages as areas for policy analysis as well as an arena for social action:

But in addition to these benefits, considerable research indicates that strong and cohesive neighbourhoods and communities are linked—quite possibly causally linked—to decreases in crime, better outcomes for children, and improved physical and mental health. The social support that a strong neighbourhood may provide can serve as a buffer against various forms of adversity.

In the mainland of the People's Republic of China, the term is generally used for the urban administrative division found immediately below the district level, although an intermediate, subdistrict level exists in some cities. They are also called streets (administrative terminology may vary from city to city). Neighbourhoods encompass 2,000 to 10,000 families. Within neighbourhoods, families are grouped into smaller residential units or quarters of 100 to 600 families and supervised by a residents' committee; these are subdivided into residents' small groups of fifteen to forty families. In most urban areas of China, neighbourhood, community, residential community, residential unit, ' 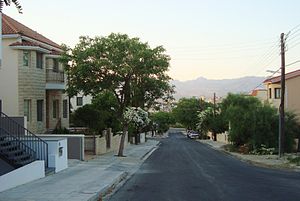 The term has no general official or statistical purpose in the United Kingdom, but is often used by local boroughs for self-chosen sub-divisions of their area for the delivery of various services and functions, as for example in Kingston-upon-Thames[21] or is used as an informal term to refer to a small area within a town or city. The label is commonly used to refer to organisations which relate to such a very local structure, such as neighbourhood policing[22] or Neighbourhood watch schemes. In addition, government statistics for local areas are often referred to as neighbourhood statistics, although the data themselves are broken down usually into districts and wards for local purposes.

In Canada and the United States, neighbourhoods are often given official or semi-official status through neighborhood associations, neighborhood watches, or block watches. These may regulate such matters as lawn care and fence height, and they may provide such services as block parties, neighborhood parks, and community security. In some other places the equivalent organisation is the parish, though a parish may have several neighborhoods within it depending on the area.

In localities where neighborhoods do not have an official status, questions can arise as to where one neighborhood begins and another ends. Many cities use districts and wards as official divisions of the city, rather than traditional neighborhood boundaries.