The Nepali Civil War (labelled the People's War by the Maoists) was an armed conflict between government forces and Maoist rebels in Nepal which lasted from 1996 until 2006. The war was launched by the Communist Party of Nepal (Maoist) on 13 February 1996 after being denied participation in a national election. Among the primary aims were overthrowing the Nepalese monarchy, overcoming caste discrimination and favoritism, eliminating corruption and unwarranted entitlements, and establishing a 'People's Republic'. It ended with the Comprehensive Peace Accord signed on 21 November 2006.

More than 15,000 people were killed (10,500 civilians by the Government and 3,000 Royal Army by the Maoist)[1] and an estimated 100,000 to 150,000 people were internally displaced as a result of the conflict. This conflict disrupted the majority of rural development activities and led to a deep and complex Left Front which, together with the Nepali Congress, was the backbone of the broadbased movement for democratic change. However, communist groups uncomfortable with the alliance between ULF and Congress formed a parallel front, the United National People's Movement. The UNPM called for elections to a Constituent Assembly, and rejected compromises made by ULF and Congress with the royal house. In November 1990 the Communist Party of Nepal (Unity Centre) was formed, including key elements of constituents of UNPM. The new party held its first convention in 1991, the adopted a line of "protracted armed struggle on the route to a new democratic revolution" and that the party would remain an underground party. The CPN(UC) set up Samyukta Jana Morcha, with Baburam Bhattarai as its head, as an open front ten contest elections. In the 1991 elections, SJM became the third force in the Nepali parliament. However, disagreements surged regarding which tactics were to be used by the party. One sector argued for immediate armed revolution whereas others (including senior leaders like Nirmal Lama) claimed that Nepal was not yet ripe for armed struggle.

In 1994 CPN(UC)/SJM was split in two. The militant faction later renamed itself the Communist Party of Nepal (Maoist). The Maoists labeled the government forces "feudal forces," and included in this accusation was the monarchy and the mainstream political parties. The armed struggle began soon afterward with simultaneous attacks on remote police stations and district headquarters. Initially, the Nepali government mobilized the Nepal Police to contain the insurgency. The Royal Nepal Army was not involved in direct fighting because the conflict was regarded as a matter for the police to sustain control. Furthermore, controversy grew regarding the army not assisting the police during insurgent attacks in remote areas. The popularly-elected prime minister resigned his post, due to the refusal of the Royal Army to take part in the conflict. This situation changed dramatically in 2002 when the first session of peace talks failed and the Maoists attacked an army barracks in Dang District in western Nepal. Overnight, the army was unleashed against the insurgents, mobilizing both tanks and artillery. Under the aegis of the global War on Terrorism and with the stated goal of averting the development of a "failed state" that could serve as a source of regional and international instability, the United States, European Union, and India, among other nations, have provided extensive military and economic aid to the Nepali government. This material support to the Nepali government dried up after King Gyanendra seized full control in February 2005 to get rid of civil war for once and all.

The government responded to the rebellion by banning provocative statements about the monarchy,[3] imprisoning journalists, and shutting down newspapers accused of siding with the insurgents. Several rounds of negotiations, accompanied by temporary cease-fires, were held between the insurgents and the government. The government categorically rejected the insurgents' demand for an election to the constituent assembly; it would result in the abolition of the monarchy by a popular vote. At the same time, the Maoists refused to recognize the installation of a constitutional monarchy. In November 2004, the government rejected the Maoists' request to negotiate directly with the King Gyanendra rather than via the Prime Minister Sher Bahadur Deuba; their request for discussions to be mediated by a third party, such as the United Nations was dismissed.

Throughout war, the government controlled the main cities and towns, whilst the Maoist dominated the rural areas. Historically, the presence of the Nepali government has been limited to town and zonal centers. The only state apparatus present in most small villages, where most of the inhabitants of Nepal live, were a health post, a government school, a village council, and a police booth. Once the insurgency began, the schools were all that remained, indicating that the Maoists had seized control of the village. The Royal government powerbase was located in the zonal headquarters and the capital Kathmandu. Unrest reached Kathmandu in 2004 when the Maoists announced a blockade of the capital city. 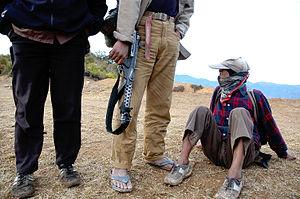 Intense fighting and civic unrest continued well into 2005, with the death toll rising to 200 in December 2004. On 1 February 2005, in response to the inability of the relatively democratic government to restore order, King Gyanendra assumed total control of the government. He proclaimed, "Democracy and progress contradict one another... In pursuit of liberalism, we should never overlook an important aspect of our conduct, namely discipline."

On 22 November 2005, the joint CPN(M)–United People's Front conference in Delhi issued a 12-point resolution, stating that they "...completely agree that autocratic monarchy is the main hurdle" hindering the realisation of "democracy, peace, prosperity, social advancement and a free and sovereign Nepal." In addition, "It is our clear view that without establishing absolute democracy by ending autocratic monarchy, there is no possibility of peace, progress, and prosperity in the country."

An understanding had been reached to establish absolute democracy by ending monarchy with the respective forces centralizing their assault against monarchy thereby creating a nationwide storm of democratic protests. This marked a departure from the previous stance of the CPN(M), which had so far vehemently opposed the gradual process of democratization advocated by the UPF.

As a result of the civil war, Nepal's greatest source of foreign currency, its tourism industry, suffered considerably. Travel company iExplore published rankings of the popularity of tourist destinations, based on their sales, which indicated that Nepal had gone from being the tenth most popular destination among adventure travelers, to the twenty-seventh.

The conflict forced the young and able to seek work abroad in order to avoid the human rights violations committed by the government forces and the crimes committed by the Maoists. These guest workers work predominantly in the Gulf (Qatar, Saudi Arabia, etc.) and Southeast Asia (Malaysia etc.). The regular flow of remittances from these labourers has permitted the country to avoid serious economic crisis or economic bankruptcy. The economy of Nepal is heavily dependent on the infusion of foreign income from the guest workers (similar to the Lebanese economy during its civil war).

The Nepalese Army (NA) took final control over the People's Liberation Army (PLA), the armed wing of the Unified Communist Party of Nepal (Maoist), on 10 April 2012.[4] Prime Minister (PM) Baburam Bhattarai, who also heads the Army Integration Special Committee (AISC), told the committee on 10 April 2012, that the NA was going to move into all 15 PLA cantonments, take full control, and seize more than 3,000 weapons locked in containers lying there.[4] He added that the process would be completed by the evening of 12 April.[4] However, following reports of clashes in the cantonments, the PM met the NA chief, Chhattra Man Singh Gurung, in the evening of 10 April, and directed him to implement the decisions of the AISC.[4] NA troops took charge of the cantonments and the weapons’ containers the same day.[4] This vitiated the environment in the cantonments.[4] Consequently, the process was halted on 10 April at the request of the Maoist leadership.[4] It was, however, restarted on 13 April, and, as of 19 April 2012, when it was finally concluded, there were 3,129 former PLA combatants left for integration into the NA.[4] A total of 6,576 combatants chose the Voluntary Retirement Scheme (VRS), that promises cheques in the range of NPR 500,000 to NPR 800,000, depending on their ranks.[4]

In the first phase ( 18 to 1 November December 2011) of regrouping, 9,705 former combatants had chosen integration into the NA.[4] In a landmark achievement, the AISC had initiated the process of integration following a 1 November 2011, seven-point deal signed by three major political parties – UCPN-M, Communist Party of Nepal (Unified Marxist-Leninist) (CPN-UML) and Nepali Congress (NC) – and the umbrella formation of several Madheshi groups, the United Democratic Madhesi Front (UDMF).[4] The deal provided three options to former PLA combatants – integration, voluntary retirement and rehabilitation.[4] 9,705 combatants opted for integration, 7,286 chose voluntary discharge, and six combatants registered their names for rehabilitation packages.[4] The United Nations Mission in Nepal (UNMIN) had registered 19,602 combatants in the second verification conducted on 26 May 2007.[4]

An 14 April 2012, AISC decision laid down that the ranks of the integrated combatants would be determined according to the NA’s, and not the PLA’s, standards.[4] A Selection Committee would be headed by the Chairman of Nepal’s Public Service Commission (PSC) or by a member appointed by him, and a General Directorate would be created under the NA, headed by a Lieutenant General, to absorb the integrated combatants.[4] The combatants will have to undergo between three and nine months of training, depending on their ranks.[4] The Directorate would only be deployed for disaster relief, industrial security, development, and forest and environment conservation.[4] On 17 April, the NA stated that it could not start the recruitment process of former Maoist combatants until the structure—leadership and size—of the General Directorate had been finalised at the political level.[4] On 19 April 2012, the three major political parties agreed to merge two separate proposed commissions on Truth and Reconciliation, and on Disappearances, into one.[4] 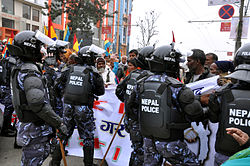