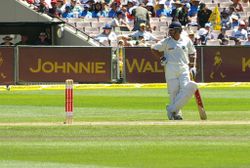 Sachin Tendulkar has dismissals 28 times in the 90s in all three format, most by any batsman

The nervous nineties is a commonly used term in cricket.[1][2][3]

The term refers to a specific form of analysis paralysis, felt by a batsman when he has scored more than 90 runs in an innings, and is nervous because of the pressure and desire to convert this into a century (100 runs), which is considered to be a milestone of success in the game. Therefore this situation is referred to as batsmen being in the nervous nineties. Batsmen tend to bat in a more conservative manner when they are close to their century, in order to avoid getting out and thus missing out on the milestone. Batsmen dismissed on 99 are considered the unluckiest of the nervous nineties victims.

The opposing captain may position his fielders near the batsmen in order to create extra pressure to get the batsman out. As a result of this many batsmen fail to convert scores of nineties into centuries.

Statistically, one of the worst victims of the nervous nineties was Australian opener (and now commentator) Michael Slater, dismissed in the nineties 9 times in his test career, and surviving to make a century 14 times.[4] West Indian batsman Alvin Kallicharran's record was similarly poor, dismissed in the nineties 7 times for 12 career centuries. India's most renowned cricketer Sachin Tendulkar has scored in 90s 18 times in ODIs and 10 times in Test cricket and holds the record for highest number of unlucky dismissals in the 90s (a total of 28 times) across all forms of international cricket.

Sir Donald Bradman holds the record for most Test centuries scored in a career without ever being dismissed in the nervous nineties: a total of 29 centuries. Greg Chappell (24 centuries) and Michael Vaughan (18 centuries) have the next best records.[5]

While most dedicated batsmen can achieve multiple centuries and potentially dozens of opportunities to score them, for many all-rounders and bowlers, it can be rare for an innings to last long enough to achieve a century because of his team-mates losing their wickets, or for the lower-skilled bowler to be effective enough in his stroke play to come close to a century on many occasions. Shane Warne, who was considered to have a good level of skill as a power-hitting lower-order batsman, played 199 Test innings as a batsman and achieved 12 half-centuries. He was dismissed twice in the 90s, once on 90, and once on 99. Ashton Agar, playing on debut for Australia against England, came in as the last batsman and compiled the highest ever score for a number 11 batsmen, but fell for 98 with a rash pull shot from a bouncer, after nervously swatting and missing at two previous deliveries. Nervous nineties are also applicable for the batsmen who get dismissed at 190s or the 290s. Steven Smith the Aussie skipper against West Indies in April 2015 and Younus Khan of Pakistan both missed a chance of a double ton (199).Ms got out in a match against South Africa at 98 in Johannesburg in a test series against South Africa similarly Sachin Tendulkar the India batsman got at 99 against England in NatWest series in the year 2004-05