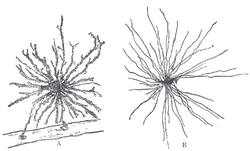 Neuroglia of the brain shown by Golgi's method

Astrocytes can be identified in culture because, unlike other mature glia, they express glial fibrillary acidic protein (GFAP) 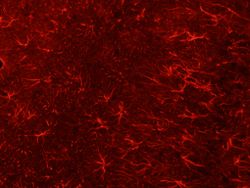 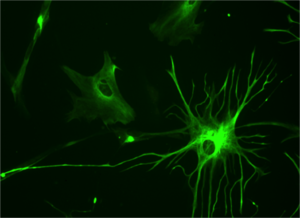 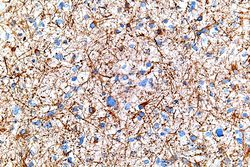 Neoplastic glial cells stained with an antibody against GFAP (brown), from a brain biopsy

Glial cells, sometimes called neuroglia or simply glia (Greek γλία and γλοία "glue"; pronounced in English as either /ˈɡliːə/ or /ˈɡlaɪə/), are non-neuronal cells that maintain homeostasis, form myelin, and provide support and protection for neurons in the central nervous system and peripheral nervous system.[1]

As the Greek name implies, glia are commonly known as the glue of the nervous system; however, this is not fully accurate. Glia were discovered in 1856, by the pathologist Rudolf Virchow in his search for a "connective tissue" in the brain.[2] Neuroscience currently identifies four main functions of glial cells:

For over a century, it was believed that the neuroglia did not play any role in neurotransmission. However 21st century neuroscience has recognized that glial cells do have some effects on certain physiological processes like breathing,[3][4] and in assisting the neurons to form synaptic connections between each other.[5]

Some glial cells function primarily as the physical support for neurons. Others regulate the internal environment of the brain, especially the fluid surrounding neurons and their synapses, and nutrify neurons. During early embryogenesis glial cells direct the migration of neurons and produce molecules that modify the growth of axons and dendrites. Recent research[6] indicates that glial cells of the hippocampus and cerebellum participate in synaptic transmission, regulate the clearance of neurotransmitters from the synaptic cleft, and release gliotransmitters such as ATP, which modulate synaptic function.

Glial cells are known to be capable of mitosis. By contrast, scientific understanding of whether neurons are permanently post-mitotic,[7] or capable of mitosis,[8][9][10] is still developing. In the past, glia had been considered[by whom?] to lack certain features of neurons. For example, glial cells were not believed to have chemical synapses or to release transmitters. They were considered to be the passive bystanders of neural transmission. However, recent studies have shown this to be untrue.[11]

For example, astrocytes are crucial in clearance of neurotransmitters from within the synaptic cleft, which provides distinction between arrival of action potentials and prevents toxic build-up of certain neurotransmitters such as glutamate (excitotoxicity). It is also thought that glia play a role in many neurological diseases, including Alzheimer's disease. Furthermore, at least in vitro, astrocytes can release gliotransmitter glutamate in response to certain stimulation. Another unique type of glial cell, the oligodendrocyte precursor cells or OPCs, have very well-defined and functional synapses from at least two major groups of neurons.[12] The only notable differences between neurons and glial cells are neurons' possession of axons and dendrites, and capacity to generate action potentials.

Glia ought not to be regarded as "glue" in the nervous system as the name implies; rather, they are more of a partner to neurons.[13] They are also crucial in the development of the nervous system and in processes such as synaptic plasticity and synaptogenesis. Glia have a role in the regulation of repair of neurons after injury. In the central nervous system (CNS), glia suppress repair. Glial cells known as astrocytes enlarge and proliferate to form a scar and produce inhibitory molecules that inhibit regrowth of a damaged or severed axon. In the peripheral nervous system (PNS), glial cells known as Schwann cells promote repair. After axonal injury, Schwann cells regress to an earlier developmental state to encourage regrowth of the axon. This difference between the CNS and the PNS, raises hopes for the regeneration of nervous tissue in the CNS. For example, a spinal cord may be able to be repaired following injury or severance. Schwann cells are also known as neuri-lemmocytes. These cells envelop nerve fibers of the PNS by winding repeatedly around a nerve fiber with the nucleus inside of it. This process creates a myelin sheath, which not only aids in conductivity but also assists in the regeneration of damaged fibers. Oligodendrocytes are another type of glial cell of the CNS. These dendrocytes resemble an octopus bulbous body and contain up to fifteen arm-like processes. Each “arm” reaches out to a nerve fiber and spirals around it, creating a myelin sheath. This myelin sheath insulates the nerve fiber from the extracellular fluid as well as speeds up the signal conduction in the nerve fiber.[14] 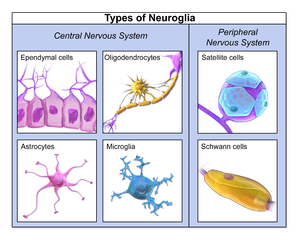 For more details on this topic, see Microglia.

Microglia are specialized macrophages capable of phagocytosis that protect neurons of the central nervous system.[15] They are derived from hematopoietic stem cells in mesodermal tissue; they are commonly categorized as such because of their supportive role to neurons.

These cells are found in all regions of the brain and spinal cord. Microglial cells are small relative to macroglial cells, with changing shapes and oblong nuclei. They are mobile within the brain and multiply when the brain is damaged. In the healthy central nervous system, microglia processes constantly sample all aspects of their environment (neurons, macroglia and blood vessels). In a healthy brain, microglia direct the immune response to brain damage and play an important role in the inflammation that accompanies the damage. Many diseases and disorders are associated with deficient microglia, such as, Alzheimer's disease, Parkinson's disease, and ALS.

Pituicytes from the posterior pituitary are glia cells with characteristics in common to astrocytes.[26] Tanycytes in the median eminence of the hypothalamus are a type of ependymal cell that descend from radial glia and line the base of the third ventricle.[27]

Glia retain the ability to undergo cell division in adulthood, whereas most neurons cannot. The view is based on the general deficiency of the mature nervous system in replacing neurons after an injury, such as a stroke or trauma, while very often there is a profound proliferation of glia, or gliosis near or at the site of damage. However, detailed studies found no evidence that 'mature' glia, such as astrocytes or oligodendrocytes, retain the ability of mitosis. Only the resident oligodendrocyte precursor cells seem to keep this ability after the nervous system matures. On the other hand, there are a few regions in the mature nervous system, such as the dentate gyrus of the hippocampus and the subventricular zone, where generation of new neurons can be observed.[28]

Most glia are derived from ectodermal tissue of the developing embryo, in particular the neural tube and crest. The exception is microglia, which are derived from hemopoietic stem cells. In the adult, microglia are largely a self-renewing population and are distinct from macrophages and monocytes, which infiltrate the injured and diseased CNS.

This scientific finding could point to the fact that glial cells have a differentiation type of biological evolution depending on their location in the brain. Perhaps specialized types of glial cells have evolved in certain areas of the brain due to its compatibility/affinity with that specific region's group of cellular nuclei physiology.

Glia were first described in 1856 by the pathologist Rudolf Virchow in a comment to his 1846 publication on connective tissue. A more detailed description of glial cells was provided in the 1858 book Cellular Pathology by the same author.[30]

When markers for different types of cells were analyzed, Einstein's brain was discovered to contain significantly more glia than normal brains in the left angular gyrus, an area thought to be responsible for mathematical processing and language. The ratio of glia to neurons increases with our definition of intelligence. Not only does the ratio of glia to neurons increase through evolution, but so does the size of the glia. Astroglial cells in the human have a volume 27 times greater than the same cells in the mouse's brain.[31]

These important scientific findings may begin to shift the neuron-specific perspective into a more holistic view of the brain which encompasses the glial cells as well. The glia's importance is becoming ever more clear as time goes on and new research is conducted. For the vast part of the last century, scientists have written off glial cells to be nothing more than the structure and foundations that hold the neurons in place. But now, there is direct evidence that correlates the number of glial cells in the brain with the amount of intelligence that any given species possesses.[32] Future research will begin to shed light on the mysterious, yet increasingly crucial, role of glial cells.

In general, neuroglial cells are smaller than neurons; there are about 86 billion neurons and 85 billion "nonneuronal" (glial) cells in the human male brain. Glial cells comprise about half the total volume of the brain and spinal cord.[33][34] The ratio differs from one part of the brain to another. The glia/neuron ratio in the cerebral cortex is 3.72 (60.84 billion glia (72%); 16.34 billion neurons), while that of the cerebellum is only 0.23 (16.04 billion glia; 69.03 billion neurons). The ratio in the cerebral cortex gray matter is 1.48 and for the combined gray and white matter is 3.76.[34] The ratio of the basal ganglia, diencephalon and brainstem combined is 11.35.[34]