From Infogalactic: the planetary knowledge core
(Redirected from Neurological)
Jump to: navigation, search
For the journal, see Neurology (journal). For the scientific study of the nervous system, see Neuroscience.

Neurology (from Greek: νεῦρον, neuron, and the suffix -λογία -logia "study of") is a branch of medicine dealing with disorders of the nervous system. Neurology deals with the diagnosis and treatment of all categories of conditions and disease involving the central and peripheral nervous system (and its subdivisions, the autonomic nervous system and the somatic nervous system); including their coverings, blood vessels, and all effector tissue, such as muscle.[1] Neurological practice relies heavily on the field of neuroscience, which is the scientific study of the nervous system.

A neurologist is a physician specializing in neurology and trained to investigate, or diagnose and treat neurological disorders.[2] Neurologists may also be involved in clinical research, clinical trials, and basic or translational research. While neurology is a non-surgical specialty, its corresponding surgical specialty is neurosurgery.[2] 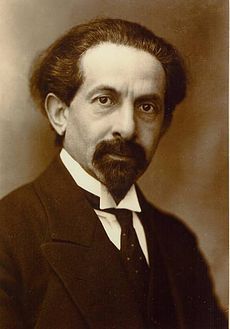 Polish neurologist Edward Flatau greatly influenced the developing field of neurology. He published a human brain atlas in 1894 and wrote a fundamental book on migraines in 1912. 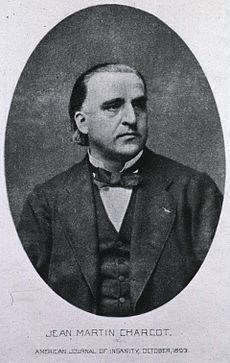 Jean-Martin Charcot is considered one of the fathers of neurology.[5]

Many neurologists also have additional training or interest in one area of neurology, such as stroke, epilepsy, neuromuscular, sleep medicine, pain management, or movement disorders.

In the United States and Canada, neurologists are physicians having completed postgraduate training in neurology after graduation from medical school. Neurologists complete, on average, at least 10–13 years of college education and clinical training. This training includes obtaining a four-year undergraduate degree, a medical degree (D.O. or M.D.), which comprises an additional four years of study, and then completing a one-year internship and a three- or four-year residency in neurology.[6] The four-year residency consists of one year of internal medicine training followed by three years of training in neurology.

In Germany, a compulsory year of psychiatry must be done to complete a residency of neurology.

In the United Kingdom and Ireland, neurology is a subspecialty of general (internal) medicine. After five to nine years of medical school and a year as a pre-registration house officer (or two years on the Foundation Programme), a neurologist must pass the examination for Membership of the Royal College of Physicians (or the Irish equivalent) before completing two years of core medical training and then entering specialist training in neurology. A generation ago, some neurologists would have also spent a couple of years working in psychiatric units and obtain a Diploma in Psychological Medicine. However, this requirement has become uncommon, and, now that a basic psychiatric qualification takes three years to obtain, the requirement is no longer practical. A period of research is essential, and obtaining a higher degree aids career progression: Many found it was eased after an attachment to the Institute of Neurology at Queen Square, London. Some neurologists enter the field of rehabilitation medicine (known as physiatry in the US) to specialise in neurological rehabilitation, which may include stroke medicine as well as brain injuries.

During a neurological examination, the neurologist reviews the patient's health history with special attention to the current condition. The patient then takes a neurological exam. Typically, the exam tests mental status, function of the cranial nerves (including vision), strength, coordination, reflexes, and sensation. This information helps the neurologist determine whether the problem exists in the nervous system and the clinical localization. Localization of the pathology is the key process by which neurologists develop their differential diagnosis. Further tests may be needed to confirm a diagnosis and ultimately guide therapy and appropriate management.

Neurologists examine patients who have been referred to them by other physicians in both the inpatient and outpatient settings. A neurologist will begin their interaction with a patient by taking a comprehensive medical history, and then perform a physical examination focusing on evaluating the nervous system. Components of the neurological examination include assessment of the patient's cognitive function, cranial nerves, motor strength, sensation, reflexes, coordination, and gait.

In some instances, neurologists may order additional diagnostic tests as part of the evaluation. Commonly employed tests in neurology include imaging studies such as computed axial tomography (CAT) scans, magnetic resonance imaging (MRI), and ultrasound of major blood vessels of the head and neck. Neurophysiologic studies, including electroencephalography (EEG), needle electromyography (EMG), nerve conduction studies (NCSs) and evoked potentials are also commonly ordered. Neurologists frequently perform lumbar punctures in order to assess characteristics of a patient's cerebrospinal fluid. Advances in genetic testing has made genetic testing and important tool in the classification of inherited neuromuscular disease. The role of genetic influences on the development of acquired neuromuscular diseases is an active area of research.

Treatment options vary depending on the neurological problem. They can include everything from referring the patient to a physiotherapist, to prescribing medications, to recommending a surgical procedure.

Some neurologists specialize in certain parts of the nervous system or in specific procedures. For example, clinical neurophysiologists specialize in the use of EEG and intraoperative monitoring in order to diagnose certain neurological disorders.[10] Other neurologists specialize in the use of electrodiagnostic medicine studies - needle EMG and NCSs. In the US, physicians do not typically specialize in all the aspects of clinical neurophysiology - i.e. sleep, EEG, EMG, and NCSs. The American Board of Clinical Neurophysiology certifies US physicians in general clinical neurophysiology, epilepsy, and intraoperative monitoring.[11] The American Board of Electrodiagnostic Medicine certifies US physicians in electrodiagnostic medicine and certifies technologists in nerve conduction studies.[12] Sleep medicine is a subspecialty field in the US under several medical specialties including anesthesiology, internal medicine, family medicine, and neurology.[13] Neurosurgery is a distinct specialty that involves a different training path, and emphasizes the surgical treatment of neurological disorders.

There are also many non-medical doctors, those with PhD degrees in subjects such as biology and chemistry, who study and research the nervous system. Working in labs in universities, hospitals, and private companies, these neuroscientists perform clinical and laboratory experiments and tests in order to learn more about the nervous system and find cures or new treatments for diseases and disorders.

There is a great deal of overlap between neuroscience and neurology. A large number of neurologists work in academic training hospitals, where they conduct research as neuroscientists in addition to treating patients and teaching neurology to medical students.

Neurologists are responsible for the diagnosis, treatment, and management of all the conditions mentioned above. When surgical intervention is required, the neurologist may refer the patient to a neurosurgeon. In some countries, additional legal responsibilities of a neurologist may include making a finding of brain death when it is suspected that a patient has died. Neurologists frequently care for people with hereditary (genetic) diseases when the major manifestations are neurological, as is frequently the case. Lumbar punctures are frequently performed by neurologists. Some neurologists may develop an interest in particular subfields, such as stroke, dementia, movement disorders, neurointensive care, headaches, epilepsy, sleep disorders, chronic pain management, multiple sclerosis, or neuromuscular diseases.

There is some overlap with other specialties, varying from country to country and even within a local geographic area. Acute head trauma is most often treated by neurosurgeons, whereas sequelae of head trauma may be treated by neurologists or specialists in rehabilitation medicine. Although stroke cases have been traditionally managed by internal medicine or hospitalists, the emergence of vascular neurology and interventional neurologists has created a demand for stroke specialists. The establishment of JCAHO certified stroke centers has increased the role of neurologists in stroke care in many primary as well as tertiary hospitals. Some cases of nervous system infectious diseases are treated by infectious disease specialists. Most cases of headache are diagnosed and treated primarily by general practitioners, at least the less severe cases. Likewise, most cases of sciatica and other mechanical radiculopathies are treated by general practitioners, though they may be referred to neurologists or a surgeon (neurosurgeons or orthopedic surgeons). Sleep disorders are also treated by pulmonologists and psychiatrists. Cerebral palsy is initially treated by pediatricians, but care may be transferred to an adult neurologist after the patient reaches a certain age. Physical medicine and rehabilitation physicians also in the US diagnosis and treat patients with neuromuscular diseases through the use of electrodiagnostic studies (needle EMG and nerve conduction studies) and other diagnostic tools. In the United Kingdom and other countries, many of the conditions encountered by older patients such as movement disorders including Parkinson's Disease, stroke, dementia or gait disorders are managed predominantly by specialists in geriatric medicine.

Clinical neuropsychologists are often called upon to evaluate brain-behavior relationships for the purpose of assisting with differential diagnosis, planning rehabilitation strategies, documenting cognitive strengths and weaknesses, and measuring change over time (e.g., for identifying abnormal aging or tracking the progression of a dementia).

In some countries, e.g. USA and Germany, neurologists may subspecialize in clinical neurophysiology, the field responsible for EEG and intraoperative monitoring, or in electrodiagnostic medicine nerve conduction studies, EMG and evoked potentials. In other countries, this is an autonomous specialty (e.g., United Kingdom, Sweden, Spain).

Although mental illnesses are believed by many to be neurological disorders affecting the central nervous system, traditionally they are classified separately, and treated by psychiatrists. In a 2002 review article in the American Journal of Psychiatry, Professor Joseph B. Martin, Dean of Harvard Medical School and a neurologist by training, wrote that "the separation of the two categories is arbitrary, often influenced by beliefs rather than proven scientific observations. And the fact that the brain and mind are one makes the separation artificial anyway".[14]

Neurological disorders often have psychiatric manifestations, such as post-stroke depression, depression and dementia associated with Parkinson's disease, mood and cognitive dysfunctions in Alzheimer's disease and Huntington disease, to name a few. Hence, there is not always a sharp distinction between neurology and psychiatry on a biological basis. The dominance of psychoanalytic theory in the first three quarters of the 20th century has since then been largely replaced by a focus on pharmacology.[citation needed] Despite the shift to a medical model, brain science has not advanced to the point where scientists or clinicians can point to readily discernible pathologic lesions or genetic abnormalities that in and of themselves serve as reliable or predictive biomarkers of a given mental disorder.

The emerging field of neurological enhancement highlights the potential of therapies to improve such things as workplace efficacy, attention in school, and overall happiness in personal lives.[15] However, this field has also given rise to questions about neuroethics and the psychopharmacology of lifestyle drugs.