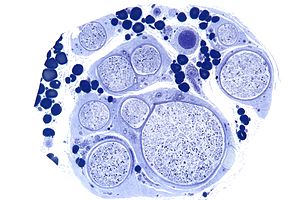 Neuropathology is the study of disease of nervous system tissue, usually in the form of either small surgical biopsies or whole autopsies. Neuropathology is a subspecialty of anatomic pathology, neurology, and neurosurgery. It should not be confused with neuropathy, which refers to disorders of the nerves (usually in the peripheral nervous system).

The work of the neuropathologist consists largely of examining biopsy tissue from the brain and spinal cord to aid in diagnosis of disease. The biopsy is usually requested after a mass is detected by radiologic imaging. As for autopsies, the principal work of the neuropathologist is to help in the post-mortem diagnosis of various forms of dementia and other conditions that affect the central nervous system.

Biopsies can also consist of the skin. Epidermal nerve fiber density testing (ENFD) is a more recently developed neuropathology test in which a punch skin biopsy is taken to identify small fiber neuropathies by analyzing the nerve fibers of the skin. This pathology test is becoming available in select labs as well as many universities; it replaces the traditional sural nerve biopsy test as less invasive. It is used to identify painful small fiber neuropathies.

Many neuropathologists in Europe have a background in the clinical neurosciences (neurology, psychiatry) as well as pathology.

Neuropathology in the US System

Neuropathology in the UK/Canadian/Commonwealth System

In addition to examining central nervous system tissue, the neuropathologist usually is assigned the task of examining muscle and peripheral nerve biopsies. Muscle biopsies are taken to aid in the diagnosis of muscle diseases (such as polymyositis, mitochondrial myopathy, etc.). Peripheral nerve is assessed to help work up patients with suspected peripheral neuropathies secondary to such conditions as vasculitis and amyloidosis.

Neuropathology is a heavily research-oriented field.

Santiago Ramon y Cajal is considered one of the founders of modern neuroanatomy. Alois Alzheimer, the person after whom Alzheimer's disease is named, is considered an important early contributor to the field.

There are many neuropathologists around the world who have made important clinical and research contributions toward our understanding of diseases that specifically affect the brain (degenerative diseases, multiple sclerosis, stroke, brain tumors, trauma and neuromuscular diseases). The majority are members of the International Society of Neuropathology (ISN). For neuropathologists practicing within the United States of America please refer to the Membership Directory available through the American Association of Neuropathologists (AANP) website. There are also Membership Directories available for many of the neuropathology societies that exist in other specific countries and/or regions of the world (British, European, Canadian... etc.).

A European Board Examination in Neuropathology which emphasizes the importance of proper training in the neurosciences is currently being established (www.euro-cns.org). The most recent international meeting of neuropathologists occurred in September 2014 in Rio de Janeiro, Brazil.