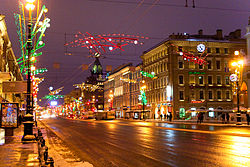 The avenue near the Gostiny Dvor, 1799 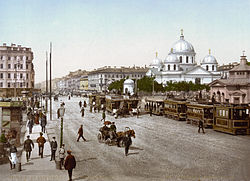 The avenue near the Nicholas Station, 1890s

Nevsky Prospect (Russian: Не́вский проспе́кт, tr. Nevsky Prospekt; IPA: [ˈnʲɛfskʲɪj prɐˈspʲɛkt]) is the main street in the city of St. Petersburg, Russia. Planned by Peter the Great as beginning of the road to Novgorod and Moscow, the avenue runs from the Admiralty to the Moscow Railway Station and, after making a turn at Vosstaniya Square, to the Alexander Nevsky Lavra.

The chief sights include the Rastrelliesque Stroganov Palace, the huge neoclassical Kazan Cathedral, the Art Nouveau Bookhouse, Elisseeff Emporium, half a dozen 18th-century churches, a monument to Catherine the Great, an enormous 18th-century shopping mall, a mid-19th-century department store, the Russian National Library, the Anichkov Bridge with its horse statues, and the Singer House. The feverish life of the avenue was described by Nikolai Gogol in his story "Nevsky Prospekt". Fyodor Dostoevsky often employed the Nevksy Prospekt as a setting within his works, such as Crime and Punishment and The Double: A Petersburg Poem.

During the early Soviet years (1918–44) the name of Nevsky Prospect was changed, first to "Proletkult Street" (Ulitsa Proletkul'ta) in honor of that Soviet artistic organization.[1] Following the demise of Proletkult the name was changed again, this time to "Avenue of the 25th of October," alluding to the day of the October Revolution.

The Nevsky today functions as the main thoroughfare in Saint Petersburg. The majority of the city's shopping and nightlife are located on or right off of the Nevsky Prospekt.