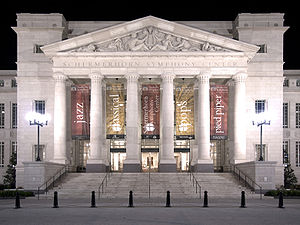 At the beginning of the 20th century, historicism and Jugendstil were still dominant styles in Germany. The Austrian architect Adolf Loos criticized his time's architecture as too "grandiloquent" and "opulent", and longed for a complete abandonment of architectural ornaments in his 1910 essay Ornament and Crime.[2] As early as the first major modernist movements like Werkbund and Bauhaus gained momentum in Germany, the desire to continue and develop classical styles sprouted.[3] From 1904 until around 1955 the Heimatschutz style prospered in Germany, which focused on vernacular traditions and can be roughly translated to cultural protection style. Examples of this early new classical style are the Hamburg Museum, the Prinzipalmarkt in Münster and the market square of Freudenstadt. After heavy Allied bombing of Germany in World War II, architects such as Adolf Abel, Roderich Fick, Konstanty Gutschow, Werner March, Paul Schmitthenner, Julius Schulte-Frohlinde, and Rudolf Wolters assisted in the postwar rebuilding of destroyed German cities using Heimatschutz and other traditional design methods. In Britain, architect Raymond Erith continued to design classical houses into the late 1960s and early 1970s. Quinlan Terry, a New Classical Architect who continues to practice, was an employee, later a partner and now the successor of the late Raymond Erith. In the late 1970s several young architects in Europe began challenging modernist proposals in architecture and planning. To broadcast them, Leon Krier and Maurice Culot founded the Archives d'Architecture Moderne in Brussels and began publishing texts and counterprojects to modernist proposals in architecture and planning.[4] It received a boost from the sponsorship of Charles, Prince of Wales, especially with The Prince's Foundation for Building Community.[5] 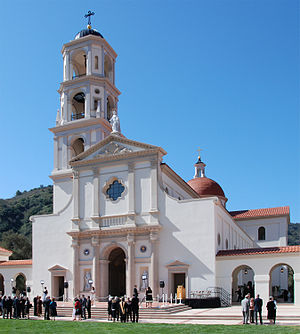 With the demand for professors knowledgeable in the history of architecture, several PhD programs in schools of architecture arose in order to differentiate themselves from art history PhD programs, where architectural historians had previously trained. In the US, MIT and Cornell were the first, created in the mid-1970s, followed by Columbia, Berkeley, and Princeton. Among the founders of new architectural history programs were Bruno Zevi at the Institute for the History of Architecture in Venice, Stanford Anderson and Henry Millon at MIT, Alexander Tzonis at the Architectural Association, Anthony Vidler at Princeton, Manfredo Tafuri at the University of Venice, Kenneth Frampton at Columbia University, and Werner Oechslin and Kurt Forster at ETH Zürich.[7] The creation of these programs was paralleled by the hiring, in the 1970s, of professionally trained historians by schools of architecture: Margaret Crawford (with a PhD from U.C.L.A) at SCI-Arc; Elisabeth Grossman (PhD, Brown University) at Rhode Island School of Design; Christian Otto[8] (PhD, Columbia University) at Cornell University; Richard Chafee (PhD, Courtauld Institute) at Roger Williams University; and Howard Burns (M.A. Kings College) at Harvard.

In these years postmodern architecture developed a critique of modernist architectural aesthetics.[9] Among them were certain influential postmodernist architects such as Charles Moore, Robert Venturi,[10] and Michael Graves, who used classical elements as ironic motifs in order to criticize modernism's sterility. A broad spectrum of more than two dozen architects, theorists, and historians presented other alternatives to modernism.[11] Among them were several serious New Classical architects who saw classicism as a legitimate mode of architectural expression, several of whom would later become Driehaus Prize Laureates, including some such as Thomas Beeby and Robert A.M. Stern, who practice both in post modern as well as classical modes. Some postmodernist firms, such as Stern and Albert, Righter, & Tittman, fully moved from postmodern design to new interpretations of traditional architecture.[9] Thomas Gordon Smith, the 1979 Rome Prize laureate from the American Academy in Rome, was a devotee of Charles Moore. In 1988 Smith Published "Classical Architecture - Rule and Invention" and in 1989 was appointed to be chair of the University of Notre Dame Department of Architecture, which is now the School of Architecture.[12] Today other programs exist which teach in part New Classical Architecture at the University of Miami, Judson University, Andrews University and beginning in 2013,[13] the Center for Advanced Research in Traditional Architecture at the University of Colorado Denver.

Alongside these academic and scholarly developments, a populist and professional manifestation of new classicism has existed and continues to develop. The 1963 demolition of McKim, Meade and White's Pennsylvania Railroad Station in New York City provoked the formation of Classical America and its regional chapters, led by Henry Hope Reed, Jr..[14] Classical America advocated the appreciation of classically inspired buildings and for the practice of contemporary classical and traditional design by teaching architects to draw the classical orders, hosting walking tours, educational events, conferences and publishing The Classical America Series in Art and Architecture.[15] In 2002, the then-named Institute of Classical Architecture merged with Classical America to form the Institute of Classical Architecture & Classical America (now the Institute of Classical Architecture & Art). The ICAA currently supports and is supported by regional chapters across the United States, almost all of which host awards programs [16] which recognize significant accomplishments in new classical and traditional design and construction. The ICAA publishes The Classicist,[17] a peer-reviewed journal exclusively dedicated to the theory and practice of contemporary classicism in architecture, urbanism, and the allied arts. The ICAA offers educational programs to architecture and design professionals, many of which follow the methodologies of the École des Beaux-Arts. The ICAA also teaches courses to educate the general public,[18] and has created programs such as the Beaux Arts Atelier, the Advanced Program in Residential Design for the American Institute of Building Designers, and many other unique programs.

In 2003, Chicago philanthropist Richard H. Driehaus established[19] a prize in architecture to be given to an architect "whose work embodies the principles of classical and traditional architecture and urbanism in society, and creates a positive, long lasting impact." Awarded by the University of Notre Dame School of Architecture, the Driehaus Architecture Prize is seen as the alternative to the modernist Pritzker Prize. The Driehaus Prize is given in conjunction with the Reed Award, for an individual working outside the practice of architecture who has supported the cultivation of the traditional city, its architecture and art through writing, planning or promotion.[20] Other high-profiled classical architecture awards are the US-American Palladio Award,[21] the Edmund N. Bacon Prize,[22] and the Rieger Graham Prize[23] of the Institute of Classical Architecture and Art (ICAA) for architecture graduates.

Fundamental tenets of the New Classicism is that it is not limited to neoclassical architecture and that "classical" is not a style in itself, but a way of elevating the art of building to the art of architecture.[24] A classical building uses imitation to express its tectonic truth, which is not the same as the facts of its construction, and finds its beauty not in originality and style but in the handling of the traditional forms that have always been its vehicles. Classical buildings also always account for the differences between the public and the private realms in addressing the urban and rural conditions where they are built. New classical architects also emphasize the awareness of sustainability, the aim is to create long-lasting, well-crafted buildings of great quality, with an efficient use of natural resources.[25]

While modernist teaching remains dominant at universities and architecture faculties around the world, some institutions focus solely, mainly or partly on teaching the principles of traditional and classical architecture and urban planning. Some of these are:[26]

In the United Kingdom