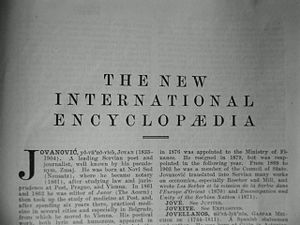 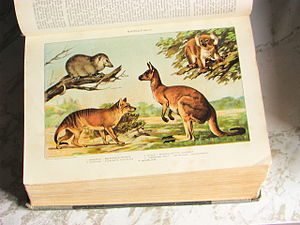 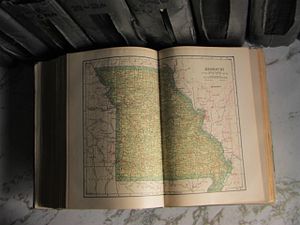 The New International Encyclopedia was an American encyclopedia first published in 1902 by Dodd, Mead and Company.[1] It descended from the International Cyclopaedia (1884) and was updated in 1906, 1914 and 1926.

Initially, the International Cyclopaedia was largely a reprint of Alden's Library of Universal Knowledge, which was a reprint of the British Chambers's Encyclopaedia with American additions (including many biographical entries for Americans).

In 1906 the New International Encyclopedia was expanded from 17 volumes to 20. The 2nd edition appeared in 1914 in 24 volumes, set up from new type and thoroughly revised. It was very strong in biography.[2]

The 1926 material was printed in Cambridge, Massachusetts, by The University Press. Boston Bookbinding Company of Cambridge produced the covers. Thirteen books enclosing twenty-three volumes comprise the encyclopedia, which includes a supplement after Volume 23. Each book contains about 1600 pages.[3]

A great deal of biographic material is recorded in the New International Encyclopedia. An early description of Adolf Hitler and his activities from 1920 to 1924 is in the supplement to the 1926 edition. Many of the names used to describe the scientific identities of plants and animals are now obsolete.

Numerous colorful maps which display the nations, states, colonies, and protectorates which existed early in the twentieth century are included. The maps are valuable for their depictions of national and colonial borders in Europe, Asia, and Africa at the time of World War I. Drawings, illustrations, and photographs are plentiful.

More than 500 men, and some women, submitted and composed the information contained in the New International Encyclopedia.

Editors of the First Edition

Editors of the Second Edition