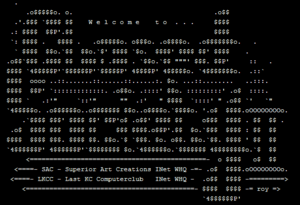 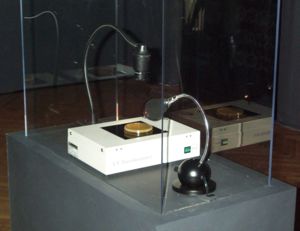 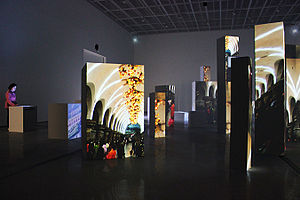 New media art is a genre that encompasses artworks created with new media technologies, including digital art, computer graphics, computer animation, virtual art, Internet art, interactive art, video games, computer robotics, 3D printing, cyborg art and art as biotechnology. The term differentiates itself by its resulting cultural objects and social events, which can be seen in opposition to those deriving from old visual arts (i.e. traditional painting, sculpture, etc.). This concern with medium is a key feature of much contemporary art and indeed many art schools and major universities now offer majors in "New Genres" or "New Media"[1] and a growing number of graduate programs have emerged internationally.[2] New Media Art often involves interaction between artist and observer or between observers and the artwork, which responds to them. Yet, as several theorists and curators have noted, such forms of interaction, social exchange, participation, and transformation do not distinguish new media art but rather serve as a common ground that has parallels in other strands of contemporary art practice.[3] Such insights emphasize the forms of cultural practice that arise concurrently with emerging technological platforms, and question the focus on technological media, per se.

New Media concerns are often derived from the telecommunications, mass media and digital electronic modes of delivering the artworks involve, with practices ranging from conceptual to virtual art, performance to installation.

The origins of new media art can be traced to the moving photographic inventions of the late 19th century such as the zoetrope (1834), the praxinoscope (1877) and Eadweard Muybridge's zoopraxiscope (1879). From the 1920s through the 1950s, various forms of kinetic and light art, from Thomas Wilfred's 'Lumia' (1919) and 'Clavilux' light organs to Jean Tinguely's self-destructing sculpture 'Homage to New York' (1960) can be seen as progenitors of new media art.

In 1958 Wolf Vostell becomes the first artist who incorporates a television set into one of his works. The Black Room Cycle.[4] This installation is part of the collection of the Berlinische Galerie.

During the 1960s the development of then new technologies of video produced the new media art experiments of Nam June Paik, and Wolf Vostell with the installation 6 TV Dé-coll/age in 1963 at the Smolin Gallery in New York.[5] A. Michael Noll, and multimedia performances of E.A.T., Fluxus and Happening. In 1983, Roy Ascott introduced the concept of "distributed authorship" in his worldwide telematic project La Plissure du Texte[6] for Frank Popper's "Electra" at the Musée d'Art Moderne de la Ville de Paris . The development of computer graphics at the end of the 1980s and real time technologies then in the 1990s combined with the spreading of the Web and the Internet favored the emergence of new and various forms of interactivity art by Lynn Hershman Leeson, David Rokeby, Ken Rinaldo, Perry Hoberman; telematic art by Roy Ascott; Internet art by Vuk Ćosić, Jodi; virtual and immersive art by Jeffrey Shaw, Maurice Benayoun and large scale urban installation by Rafael Lozano-Hemmer.

Simultaneously advances in biotechnology have also allowed artists like Eduardo Kac to begin exploring DNA and genetics as a new art medium.

New Media Art influences on new media art have been the theories developed around hypertext, databases, and networks. Important thinkers in this regard have been Vannevar Bush and Theodor Nelson, whereas comparable ideas can be found in the literary works of Jorge Luis Borges, Italo Calvino, and Julio Cortázar. These elements have been especially revolutionary for the field of narrative and anti-narrative studies, leading explorations into areas such as non-linear and interactive narratives.

In the book New Media Art, Mark Tribe and Reena Jana named several themes that contemporary new media art addresses, including computer art, collaboration, identity, appropriation, open sourcing, telepresence, surveillance, corporate parody, as well as intervention and hacktivism.[7] In the book Postdigitale,[8] Maurizio Bolognini suggested that new media artists have one common denominator, which is a self-referential relationship with the new technologies, the result of finding oneself inside an epoch-making transformation determined by technological development. Nevertheless, new media art does not appear as a set of homogeneous practices, but as a complex field converging around three main elements: 1) the art system, 2) scientific and industrial research, and 3) political-cultural media activism.[9] There are significant differences between scientist-artists, activist-artists and technological artists closer to the art system, who not only have different training and technocultures, but have different artistic production.[10] This should be taken into account in examining the several themes addressed by new media art.

Non-linearity can be seen as an important topic to new media art by artists developing interactive, generative, collaborative, immersive artworks like Jeffrey Shaw or Maurice Benayoun who explored the term as an approach to looking at varying forms of digital projects where the content relays on the user's experience. This is a key concept since people acquired the notion that they were conditioned to view everything in a linear and clear-cut fashion. Now, art is stepping out of that form and allowing for people to build their own experiences with the piece. Non-linearity describes a project that escape from the conventional linear narrative coming from novels, theater plays and movies. Non-linear art usually requires audience participation or at least, the fact that the "visitor" is taken into consideration by the representation, altering the displayed content. The participatory aspect of new media art, which for some artists has become integral, emerged from Allan Kaprow's Happenings and became with Internet, a significant component of contemporary art. Art is not produced as a completed object submitted to the audience appreciation, it is a process in permanent mutation.[citation needed]

The inter-connectivity and interactivity of the internet, as well as the fight between corporate interests, governmental interests, and public interests that gave birth to the web today, fascinate and inspire a lot of current new media art.

One of the key themes in new media art is to create visual views of databases. Pioneers in this area include Lisa Strausfeld and Martin Wattenberg.[12] Database aesthetics holds at least two attractions to new media artists: formally, as a new variation on non-linear narratives; and politically as a means to subvert what is fast becoming a form of control and authority.

The emergence of 3D printing has introduced a new bridge to new media art, joining the virtual and the physical worlds. The rise of this technology has allowed artists to blend the computational base of new media art with the traditional physical form of sculpture. A pioneer in this field was artist Jonty Hurwitz who created the first known anamorphosis sculpture using this technique.

As the technologies used to deliver works of new media art such as film, tapes, web browsers, software and operating systems become obsolete, New Media art faces serious issues around the challenge to preserve artwork beyond the time of its contemporary production. Currently, research projects into New media art preservation are underway to improve the preservation and documentation of the fragile media arts heritage (see DOCAM - Documentation and Conservation of the Media Arts Heritage).

Methods of preservation exist, including the translation of a work from an obsolete medium into a related new medium,[13] the digital archiving of media (see Internet Archive), and the use of emulators to preserve work dependent on obsolete software or operating system environments.[14]

In New Media programs, students are able to get acquainted with the newest forms of creation and communication. New Media students learn to identify what is or isn't "new" about certain technologies.[15] Science and the market will always present new tools and platforms for artists and designers. Students learn how to sort through new emerging technological platforms and place them in a larger context of sensation, communication, production, and consumption.

When obtaining a bachelor's degree in New Media, students will primarily work through practice of building experiences that utilize new and old technologies and narrative. Through the construction of projects in various media, they acquire technical skills, practice vocabularies of critique and analysis, and gain familiarity with historical and contemporary precedents.[15] New Media studies lets students create and manipulate new technologies. The nature of New Media Art provides an opportunity for students to expand the art field in new directions, however they see fit.[citation needed]

The term New Media Art is generally applied to disciplines such as: