Niamey (French pronunciation: ​[njaˈmɛ]) is the capital and largest city of the West African country Niger. Niamey lies on the Niger River, primarily situated on the east bank. It is an administrative, cultural and economic centre. Niamey's population, which was estimated at 774,235 in 2006,[4] is now projected to be much higher.[1]

The city is located in a pearl millet growing region, while manufacturing industries include bricks, ceramic goods, cement and weaving.

By some estimates the population had reached 800,000 in 2000. In 2011, government press estimated the total urban population at over 1.5 million. A major cause of the increase has been in migration for work and during droughts, as well a high population growth.[1] This last factor means a majority of the city's citizens are youths.[1] 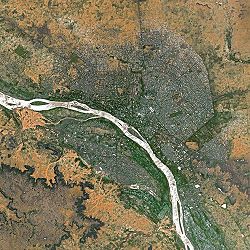 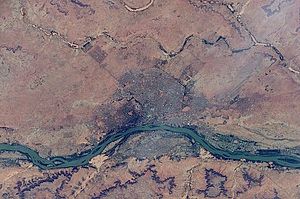 Covering an area of over 250 km2 (97 sq mi), the metropolitan area sits atop two plateaus reaching 218 m (715 ft) in altitude, bisected by the Niger River. At Niamey, the river, running almost straight SSE from Gao, makes a series of wide bends. The city was founded on the east ("left bank") of the river as it meanders from a west to east flow to run almost directly south. A series of marshy islands begin at Niamey and extend south in the river.

The climate is hot semi-arid (Köppen climate classification BSh), with an expected rainfall of between 500 mm (20 in) and 750 mm (30 in) a year, mostly beginning with a few storms in May, then transitioning to a rainy season, usually lasting from sometime in June to early September, when the rains taper off rather quickly. Most of the rainfall is from late June to mid-August. There is practically no rain from mid-October to April. Niamey is remarkably hot throughout the year. In fact, it is one of the hottest major cities on the planet. Average monthly high temperatures reach 38 °C (100 °F) four months out of the year and in no month do average high temperatures fall below 32 °C (90 °F). During the dry season, particularly from November through February, nights are generally cool. Average nighttime lows between November and February range from 14–18 °C (57–64 °F).

While Niamey's population has grown steadily since independence, the droughts of the early 1970s and 1980s, along with the economic crisis of the early 1980s, have propelled an exodus of rural inhabitants to Niger's largest city. Under the military government of General Seyni Kountché, there were strict controls on residency, and the government would regularly round up and "deport" those without permits back to their villages.[8] The growing freedoms of the late 1980s and 1990s, along with the Tuareg Rebellion of 1990s and famine in the 2000s, have reinforced the process of immigration, with large informal settlements appearing on the outskirts of the cities. Noticeable in the city's centre since the 1980s are groups of poor, young, or handicapped beggars. Within the richer or more trafficked neighbourhoods, these beggars have in fact formed a well regulated hierarchical system in which beggars garner sadaka according to cultural and religious norms.[8] 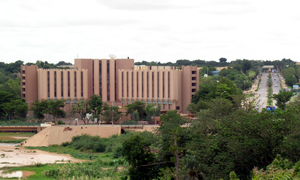 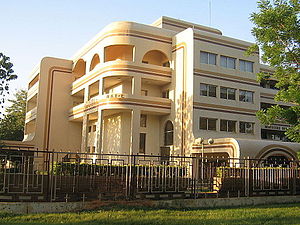 Attractions in the city include the Niger National Museum, incorporating a zoo, a museum of vernacular architecture, a craft centre, and exhibits including dinosaur skeletons and the Tree of Ténéré. There are also American, French and Nigerien cultural centres, seven major market centers including the large Niamey Grand Market, a traditional wrestling arena and a horse track.

The city is also the site of Diori Hamani International Airport, the National School of Administration, Abdou Moumouni University, the Higher Institute of Mining, Industry and Geology which lies on the right bank of the river, and many institutes (Centre numérique de Niamey, IRD, ICRISAT, Hydrologic Institute, etc.) AMU has seen a number of protest actions over the years, including the 2006 Abdou Moumouni University protests.

In December 2005, it was the host of the Jeux de la Francophonie. 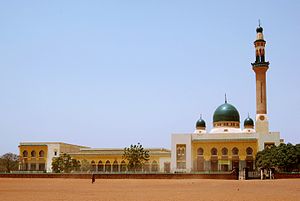 The Grand Mosque of Niamey 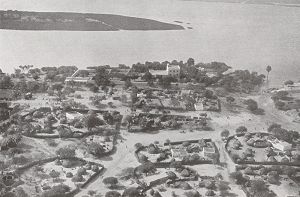 Niamey in December 1930. The large house in the centre is the French governor's residence. Air photo taken by Swiss pilot and photographer Walter Mittelholzer.

Niamey makes up a special capital district of Niger, which is surrounded by the department of Tillabéri.

Niamey hosts the African Centre of Meteorological Application for Development.[9]

More than 90% of Niger is populated by Muslims. Niamey hosts the largest mosque in the country, the Grand Mosque of Niamey. The city is the headquarters of the Roman Catholic Archdiocese of Niamey. There is also a small Bahá'í community in Niamey.

The city of Niamey itself is governed as an autonomous first-level administrative block, the Niamey Urban Community (fr. Communauté Urbaine de Niamey, CUN). It includes five Urban Communes, divided into 44 "Districts" and 99 "Quartiers", including formerly independent towns. It is a co-equal first division subdivision with the seven Regions of Niger. The Niamey Urban Community includes an administration and Governor appointed by national leaders.[1] Like the rest of Niger, Niamey has seen a decentralization of governance since 2000. Government Ordinance n°2010-56 and Presidential Decree n°2010-679 of September 2010 mandated an elected City Council for the city of Niamey, subsumed under the CUN. This excludes some outlying areas of the CUN.[1] Forty-five councilors are popularly elected and in turn elect the Mayor of the City of Niamey. In July 2011 the first Mayor under the new system, Oumarou Dogari Moumouni, was installed by the Governor of the CUN Mrs. Kané Aichatou Boulama and the City Council.[1] The City Council and Mayor have limited roles compared the CUN Governor. Niamey has a third layer of government in the Commune system. Each Commune elects its own council, and outside major cities, these function like independent cities. Niamey and other major cities have been, since the advent of decentralization, developing coordination of Commune governments in large cities made up of multiple Communes.[1]

Under this devolution process[10] formalised in the 1999 Constitution of Niger, the CUN contains five "Urban Communes" and no "Rural Communes". As all Nigerien Urban Communes, they are divided into Quarters ("Quartiers") with elected boards.

The CUN includes land where there were formerly several surrounding towns and villages which the city of Niamey has now annexed. These include Soudouré, Lamordé, Gamkallé, Yantala, and Gaweye.[12]

Until 1998, all of greater Niamey was part of Tillabery Region, which prior to 1992 was named the Niamey Department. The CUN remains surrounded on all sides by Tillabery Region.[12]

Niamey is served by the Diori Hamani International Airport, located 12 km south-east of the city and is crossed by the RN1 highway. Niamey railway station, officially inaugurated in April 2014, is the first one built in Niger.[15][16]