A lawyer by training, he was elected to the Ohio Senate, where he initiated the successful Longworth Act of 1902, regulating the issuance of municipal bonds. As congressman for Ohio's 1st congressional district, he soon became a popular social figure of Washington, and married the president’s daughter Alice Lee Roosevelt. But their relationship cooled when he opposed her father in the Republican Party split of 1912. Longworth became Majority Leader of the House in 1923, and Speaker from 1925 to 1931. In this post, he exercised powerful leadership, tempered by charm and tact.

Nicholas Longworth III attended the Franklin School,[2] a school for boys in Cincinnati, and then went on to attend Harvard College (Class of 1891), where he was a member of Delta Kappa Epsilon (Alpha chapter) and the Porcellian Club. He was a talented, but not necessarily an industrious student; one friend wrote about him: "His good head made it easy for him to get perfectly respectable marks without doing much of any work."[3] After receiving his bachelor's degree from Harvard, he attended Harvard Law School for one year, but transferred to and received his law degree from Cincinnati Law School in 1894.

Longworth was a violinist, and on their first visit to Bayreuth, his wife Alice Lee Roosevelt reported that "Nick was really a musician and cared deeply for music, but for me to listen to The Ring [i.e., Der Ring des Nibelungen], and, I think, Tannhäuser and Tristan [i.e., Tristan und Isolde] thrown in, was something in the nature of an endurance test." [4] Later she observed that "In Washington, Nick never had much time to play his violin, and in those days there were very few people to play with him. In Cincinnati there were the orchestra, the College of Music, and the Conservatory to draw on, and soon we were having musical parties, at least once, and often two or three times a week. Until then I had not heard much chamber music—only an occasional concert that I felt was far too high-brow for me to try to understand. But week after week of quartets and trios at our house or at the houses of friends opened even my ears to a new capacity for hearing..... We would all have dinner first, the musicians and a few others who cared for music, and afterwards lose no time getting started, by about nine at the latest. From then on music and yet more music until midnight and usually long after. They all played because they loved it; there never were more delightful evenings." [5] In a letter to Longworth's sister Clara, Leopold Stokowski wrote "Your brother had a rare understanding of music. He penetrated directly into the spirit of music. It was his natural element."[6]

Professional life and entry into politics 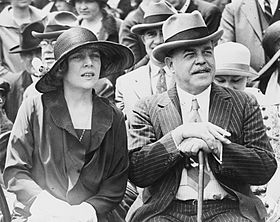 Nicholas Longworth and wife Alice seated outside the United States Capitol while watching a show put on by Arizona Native Americans, 1926. 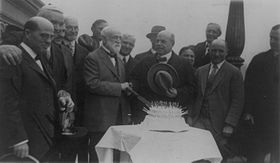 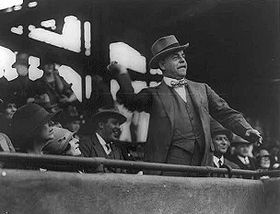 Speaker Longworth throws out the first ball at the starting Congressional Baseball Game between the Democratic and Republican teams of the House of Representatives at Griffith Stadium, Mrs. Longworth seated below, May 3, 1928. 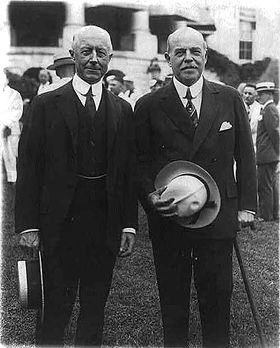 Longworth began a law practice in Cincinnati after being admitted to the Ohio bar in 1894. His political career began with a position on the city's Board of Education in 1898.

As the protégé of Republican boss George B. Cox, Longworth was elected to the Ohio General Assembly, serving in the Ohio House of Representatives in 1899 and 1900, then in the State Senate from 1901 to 1903. In 1902 he was instrumental in writing and passing the Longworth Act, a bill regulating the issuance of municipal bonds, which has been labeled "one of the most successful laws in Ohio's history"[7] Longworth was elected to the United States House of Representatives from the First Congressional District of Ohio which included the city of Cincinnati and counties bordering Kentucky and Indiana.

The new representative, still a bachelor, quickly became a popular bon vivant in Washington, D.C. society. He successfully wooed Alice Lee Roosevelt, the daughter of President Theodore "T.R." Roosevelt, Jr. and Alice Hathaway Lee, and they married in 1906. His wife had a daughter, Paulina Longworth, in 1925, though it was generally accepted knowledge in DC the girl was the natural daughter of Idaho Senator William Borah.[8]

Already well known for his social success, Nicholas Longworth first came to political prominence in 1910, when he led the successful Republican revolt against the autocratic rule of House Speaker Joseph Gurney Cannon. Throughout his political career, Longworth was a workhorse, especially on issues regarding foreign affairs and the protective tariff.

As the insurgent (or "Progressive") Republicans pulled apart from the conservatives in 1910–12, Longworth sided with the conservatives. Theodore Roosevelt led the Progressives, and bolted the Republican convention in the 1912 election to set up a third party. However, many of Roosevelt's closest political allies, including Longworth, supported conservative standard-bearer President William Howard Taft. Longworth's decision caused a permanent chill in his marriage to Alice. For men like Longworth expecting a future in politics, bolting the Republican party ticket was simply too radical a step. Also, Longworth agreed more with Taft than Roosevelt on critical issues like an independent judiciary and support for business.

Because the Progressive Party ran a candidate in his district, Longworth was defeated (by only 105 votes) in 1912. (Longworth's wife appeared at a speech by his Progressive opponent and would thereafter joke that it was she who cost her husband at least 100 of those 105 votes.)

Majority leader and Speaker of the House

Longworth returned to Congress in 1914, serving until his death in 1931, and became Majority Leader of the House in 1923.

After an effective term as Majority Leader, Longworth moved up to become Speaker in 1925 after Frederick Huntington Gillett took a seat in the United States Senate. Ironically, his first act as speaker was to restore much of the power to the office that had been stripped away during the revolt against Joseph Cannon that he helped lead.

Longworth began his tenure by punishing 13 self-styled Progressives, who supported Robert M. La Follette, Sr. instead of Calvin Coolidge in 1924. He expelled the rebels from the GOP caucus, and stripped even the committee chairmen among them of all seniority. Longworth took control of the Steering Committee and Committee on Committees and placed his own men on the Rules Committee, guaranteeing that he controlled the work of the House.

Ignoring the left wing of the party, Longworth passed legislation that aimed for balanced budgets and major tax reductions, resisting any new programs that would expand the role of government. However, Longworth defied President Herbert Hoover in 1931 by supporting the long-stalled veterans bonus bill; it passed but Hoover vetoed it, setting up the Bonus March of 1932.

Longworth reached across the aisle to Democrats, forging a productive relationship with John Nance Garner, that party's House minority leader, who relied upon informal methods to strengthen his party's influence. He enjoyed a close rapport with Garner, who said of Longworth, "I was the heathen and Nick was the aristocrat." Together they hosted a daily gathering of Democratic and Republican congressmen in a secluded room in the Capitol, which became known as the "Bureau of Education." This unofficial club provided a place for politicians to relax with a drink and get to know and work with one another across party lines.[9]

Longworth served as speaker until 1931, after the Republicans lost their House majority in the election of 1930. Journalist Frank R. Kent of the Baltimore Sun wrote of him:

Without any revision of the rules he completely recovered the power of the speakership and was the undisputed leader of the House with as autocratic control as either Reed or Cannon. It is true he exercised this power with infinitely more tact and grace and gumption and without that touch of offensive arrogance that characterized former House Czars. But he was just as much a Czar. What Mr. Longworth clearly proved was this matter of leadership depends not so much on the rules but on the man.[10]

While visiting his friend Dwight Filley Davis (of Davis Cup fame), and Daniel J. Duckett in Aiken, South Carolina, Longworth caught pneumonia and died unexpectedly. His wife Alice brought his body back to Cincinnati, where it was interred in the Spring Grove Cemetery. At a memorial service held at the Library of Congress on May 3, 1931, his old friends Efrem Zimbalist and Harold Bauer played Brahms's D minor sonata.

Donald C. Bacon described Longworth as "Debonair and aristocratic, given to wearing spats and carrying a gold-headed cane. He was perpetually cheerful, quick with a joke or witty retort, and unfailingly friendly. He seemed never to have a care and made hard decisions with such ease and detachment that some people wondered if anything at all really mattered to him."[11]

One particular famous retort is told about Longworth. One day, while lounging in a chair at the Capitol, another member of the House ran his hand over Longworth's bald pate and commented, "Nice and smooth. Feels just like my wife's bottom." Longworth felt his own head and returned an answer: "Yes, so it does."[12]