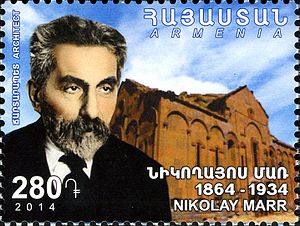 Nicholas Yakovlevich Marr (Russian: Никола́й Я́ковлевич Марр, Nikolay Yakovlevich Marr; Georgian: ნიკოლოზ იაკობის ძე მარი, Nikoloz Iak'obis dze Mari; 6 January 1865 [O.S. 25 December 1864] – 20 December 1934) was a Georgia-born historian and linguist who gained a reputation as a scholar of the Caucasus during the 1910s before embarking on his controversial "Japhetic theory" on the origin of language (from 1924) and related speculative linguistic hypotheses.

Marr's hypotheses was used as a rationale in the campaign during the 1920-30s in the Soviet Union of introduction of Latin alphabets for smaller ethnicities of the country. In 1950, the "Japhetic theory" fell from official favour, with Joseph Stalin denouncing it as anti-Marxist. 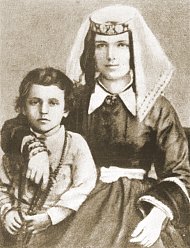 Marr was born in Kutaisi, Georgia (then part of the Russian Empire), in the family of the Scot James Marr (aged 71[1]) who founded the botanical garden of the city, and a young Georgian woman (Agrafina Magularia). His parents spoke different languages, and neither of them understood Russian. Having graduated from the St Petersburg University, he taught there beginning in 1891, becoming dean of the Oriental faculty in 1911 and member of the Russian Academy of Sciences in 1912. Between 1904 and 1917 he undertook yearly excavations at the ancient Armenian capital of Ani.[2]

Marr earned a reputation as a maverick genius with his Japhetic theory, postulating the common origin of Caucasian, Semitic-Hamitic, and Basque languages. In 1924, he went even further and proclaimed that all the languages of the world descended from a single proto-language which had consisted of four "diffused exclamations": sal, ber, yon, rosh. Although the languages undergo certain stages of development, his method of linguistic paleontology claims to make it possible to discern elements of primordial exclamations in any given language. One of his followers was Valerian Borisovich Aptekar, and one of his opponents was Arnold Chikobava.