Saint Nicholas Owen, S.J., (c. 1562 – 1/2 March 1606) was a Jesuit lay brother who was the principal builder of priest holes during the reigns of Queen Elizabeth I and James I of England.[2] After his final arrest, he was tortured to death by prison authorities in the Tower of London. He is honoured as a martyr by the Catholic Church and was canonized by Pope Paul VI in 1970.[3]

He was born in Oxford, England, around 1562 into a devoutly Catholic family and grew up during the Penal Laws. He was apprenticed as a joiner in 1577 where he acquired skills that he was to use in building hiding places. He entered the service of Henry Garnet S.J. around 1588 and for the next 18 years built hiding places for priests in the homes of Catholic families. He frequently traveled from one house to another, under the name of "Little John", accepting only the necessities of life as payment before starting off for a new project.[4]

Owen was only slightly taller than a dwarf, and suffered from a hernia.[5] Nevertheless, his work often involved breaking through thick stonework; and to minimize the likelihood of betrayal he often worked at night, and always alone. The number of hiding places he constructed will never be known. Due to the ingenuity of his craftsmanship, some may still be undiscovered.[4] 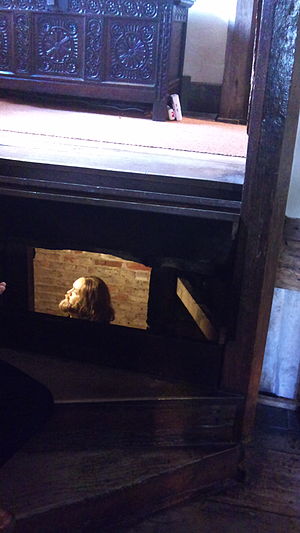 A priest hole (hiding) in the staircase made by Nicholas Owen in a 16th-century manor-house, Harvington Hall, Worcestershire, UK. 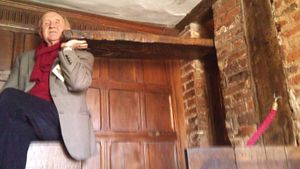 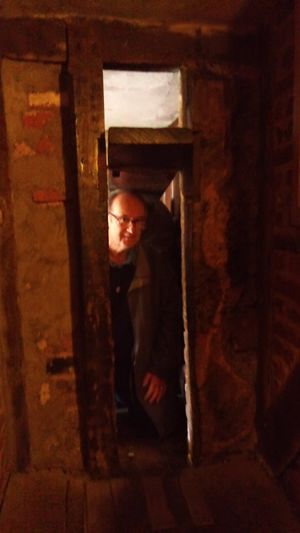 The same priest hole inside.

For many years, Owen worked in the service of the Jesuit priest Henry Garnet, and was admitted into the Society of Jesus as a lay brother. He was arrested in 1594, and was tortured at the Poultry Compter, but revealed nothing. He was released after a wealthy Catholic family paid a fine on his behalf, the jailers believing that he was merely the insignificant friend of some priests. He resumed his work, and is believed to have masterminded the famous escape of Father John Gerard, S.J. from the Tower of London in 1597.

Early in 1606, Owen was arrested a final time at Hindlip Hall in Worcestershire,[6] giving himself up voluntarily in hope of distracting attention from his master Fr. Garnet who was hiding nearby with another priest. Realizing just whom they had caught, and his value, Secretary of State, Robert Cecil exulted: "It is incredible, how great was the joy caused by his arrest... knowing the great skill of Owen in constructing hiding places, and the innumerable quantity of dark holes which he had schemed for hiding priests all through England."[2]

After being committed to the Marshalsea, a prison on the southern bank of the Thames, Owen was then removed to the Tower of London. He was submitted to terrible "examinations" on the Topcliffe rack, dangling from a wall with both wrists held fast in iron gauntlets and his body hanging. As his hernia allowed his intestines to bulge out during this procedure, the rackmaster strapped a circular plate of iron to his stomach. When he remained stubborn, it is believed that he was transferred to the rack, where the greater power of the windlass forced out his hernia which was then slashed by the plate, resulting in his death. However, Owen had revealed nothing to his inquisitors.[7] He died in the night between 1 and 2 March 1606. Father Gerard wrote of him:

"I verily think no man can be said to have done more good of all those who laboured in the English vineyard. He was the immediate occasion of saving the lives of many hundreds of persons, both ecclesiastical and secular."[7]

Owen was canonized as one of the Forty Martyrs of England and Wales by Pope Paul VI on 25 October 1970. Their joint feast day was initially celebrated on the anniversary of the canonization. That feast has been moved in England to 4 May. His individual feast day is on 22 March.[1] Catholic stage magicians who practice Gospel Magic consider St. Nicholas Owen the patron saint of Illusionists and Escapologists, due to his facility at using "trompe l'oeil" when creating his hideouts and the fact that he engineered an escape from the Tower of London.[8]

He is portrayed, as a minor character, in Robert Hugh Benson's novel Come Rack! Come Rope! (1912), where he is incorrectly named "Hugh Owen". One of his priest holes plays a key role in the Catherine Aird mystery novel A Most Contagious Game (1967). A priest hole attributed to him is also part of Peter Carey's novel Parrot and Olivier in America (2010).