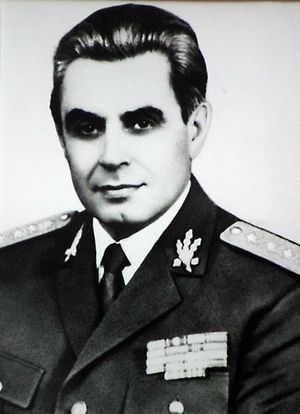 A graduate of the M. V. Frunze Military Academy in Moscow, he commanded the Romanian Land Forces' 2nd Army from 1969 to 1978. That year, under suspicion for being a GRU agent and for plotting against dictator Nicolae Ceauşescu, he was retired from active duty and made an assistant to the Defense Minister.[1] A Securitate plot to depose Ceauşescu existed in the early 1980s, and he is known to have joined in 1984, adding an Army dimension.[2]

On December 24, 1989, during the Romanian Revolution, Militaru was already in charge of the Defense Ministry when a contested incident took place. According to a narrative put forward by former Securitate agents, he lured USLA military counterintelligence agents into an ambush and ensured the group was headed by Colonel Gheorghe Trosca and Major Eugen Cotuna since they had compromising information on Militaru's alleged GRU ties; the pair ended up killed. However, during 1990, army officers in the military's own press cast doubt on a story that was widely reported in civilian newspapers, alleging it was a Securitate diversion effectively spread by agents who had infiltrated the regular press.[3]

On December 26, in the Revolution's immediate aftermath, the new leader, Ion Iliescu, formally named him Defense Minister.[1] As minister, Militaru recalled to active duty some thirty officers, most of whom had received active training in the Soviet Union. Other officers became increasingly uneasy and a pro-reform group, Comitetul de Acţiune pentru Democratizarea Armatei (CADA, Action Committee for the Democratization of the Army) emerged on February 12, 1990. The following day over a thousand soldiers and officers assembled in Bucharest,[4] and Militaru was dismissed on February 16, replaced by General Victor Stănculescu.[1] He ran in the 1996 presidential election, winning 0.22% of the vote. He died of cancer the next month on December 27, 1996.[1]