From Infogalactic: the planetary knowledge core
Jump to: navigation, search
This article is about the aircraft manufacturer. For the town of Nieuport in Flanders, see Nieuwpoort, Belgium. For other uses, see Nieuwpoort (disambiguation). 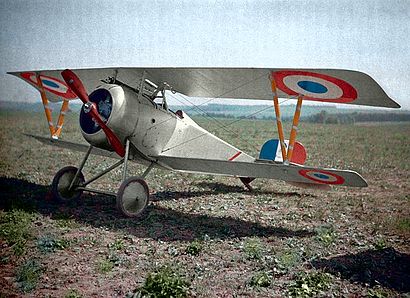 Original colour photo of a Nieuport 17 C.1 fighter of World War I

File:Nieuport Monoplane Catalogue.jpg
A Nieuport monoplane catalogue, circa 1911. The aircraft shown is an early version of the Nieuport 2

Originally formed as Nieuport-Duplex in 1902 for the manufacture of engine components the company was reformed in 1909 as the Société Générale d'Aéro-locomotion,[1] and its products (including ignition components) were marketed to the aviation industry. During this time, their first aircraft were built, starting with a small single-seat monoplane, which was destroyed in a flood. A second design flew before the end of 1909 and had the essential form of the modern aircraft, including an enclosed fuselage with the pilot protected from the slipstream and a horizontal tail whose aerodynamic force acted downwards,[citation needed] balancing the weight of the engine ahead of the center of gravity, as opposed to upwards as on the Bleriot XIs.

Nieuport had trouble obtaining suitable engines for their early designs and resorted to making their own. In 1910 a twin-cylinder horizontally-opposed type producing 28 hp (21 kW) was fitted to the Nieuport II and proved successful.

In 1911, the company was reformed specifically to build aircraft (though it continued to build components including propellers) under the name Nieuport et Deplante. In 1911, Edouard Nieuport(1875–1911) (one of several brothers) died after being thrown from his aircraft, and the company was taken over by Henri Deutsch de la Meurthe, a famous supporter of aviation development. With his financing, the name was changed to Société Anonyme des Établissements Nieuport, and development of the existing designs was continued. Charles Nieuport, the second brother died in another accident in 1912 (he stalled and spun in), and the position of chief designer was taken over by the Swiss engineer Franz Schneider, more famous for his work for his next employer, L.V.G.,[2] and his long-running fight with Anthony Fokker over machine gun interrupter / synchronizer patents. Schneider left Nieuport in late 1913.

Gustave Delage and World War I 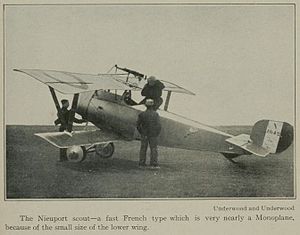 With Schneider's departure, Gustave Delage (no connection to the Delage automobile company) took over as chief designer in January 1914.[3] He began work on a sesquiplane racer - a biplane whose lower wing was much narrower in chord than its top wing and relied on a single wing spar instead of the usual two. This aircraft was not ready to fly until after World War I had begun but, as the Nieuport 10, the type saw extensive service with the Royal Naval Air Service (R.N.A.S.) of the United Kingdom and with the French and Russian Flying Services.[4] The performance of the Nieuport 10, and the more powerful Nieuport 12, which also served with the Royal Flying Corps (R.F.C.) was such that they were used as fighters. Nieuport developed an improved design specifically intended as a fighter - the Nieuport 11, which was regarded as the "baby" (bébé) of the 10, which it closely resembled, except in size.[5]

Until the end of 1917, most of the company's output would consist of successive developments of this one design, with more powerful engines, modest increases in overall dimensions, and slightly more refined aerodynamics, until the line ended with the Nieuport 27. As horsepower increased, the "V-strut" Nieuports began to suffer from the limitations of the sesquiplane wing form, and required careful piloting to avoid the risk of wing failures. By March/April 1917 the design was technically outclassed by the newer twin-gun Albatros D.III, and although the process of replacement had already begun, Nieuport 27's would still be in front line service in the spring of 1918. Even while still in frontline service, Nieuports of all types were being used at French and American flight training facilities, with the bulk of production from 1917 onwards going to flying schools.

Some pilots, notably Albert Ball and Charles Nungesser preferred the Nieuport due to its sensitive controls and maneuverability.[6] Pilots Eddie Rickenbacker and Billy Bishop flew Nieuport aircraft to some of their first victories,[7] with Bishop achieving his when the Nieuport 23 he flew was already obsolescent.

Nieuports were widely used by the Allied air arms, and various models were built under licence in Italy and Russia and the United Kingdom. In Italy, the modern firm of Aermacchi was originally formed as Nieuport-Macchi for the purpose of building various Nieuports under licence.[9] They started with the Nieuport IV, but built the Nieuport 10, 11, 17 and finally the post-war NiD.29 under license.[10] In Russia several companies, notably Dux, built Nieuports of several types including the IV, 10, 11, 16, 17, 21, 23 and 24bis.[11] In Scotland, the William Beardmore and Company built the Nieuport 12 under licence, while gradually incorporating many of their own changes. 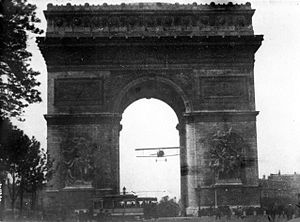 On the morning of Friday, 8 August 1919, three weeks after the Paris victory parade in 1919 marking the end of hostilities in World War I, Charles Godefroy flew a "v-strut" Nieuport fighter through the large arch of the Arc de Triomphe in Paris.[12] The event was filmed.[13]

By the end of 1918, Nieuport had two new fighter types flying, the Nieuport 29 biplane and the Nieuport 31 monoplane both of which had evolved in parallel from the Nieuport 28. They differed from earlier Nieuports in having streamlined wooden monocoque fuselages, a 300 hp (220 kW) Hispano-Suiza engine, and dispensed with the vee-strut sesquiplane wing used previously. Specially modified Nieuport 29 and 31 aircraft set speed and height records, and the 31 was the first aircraft to exceed 200 mph (320 km/h) in level flight, in the hands of Joseph Sadi-Lecointe.

At this time, Nieuport became Nieuport-Astra, with the absorption of Société Astra, a company known for aerial balloons, though this name would not be used for long, before becoming Nieuport-Delage, in honour of the work of the chief designer, Gustave Delage, who had been running the company throughout the war years. Also at this time, Tellier (who built seaplanes) was also absorbed, and for a brief time the name Nieuport-Tellier was used.

Despite the many successes achieved with 29 and 31 in setting speed and altitude records, Delage quickly embarked on a new design (The Nieuport-Delage NiD.42) that was to provide the basis for a family of aircraft that would remain in service until the fall of France during World War II. This design first saw light as a shoulder-wing racer (42S), then as single-seat (42 C.1) and two-seat fighters (42 C.2) for the French Air Force though none of these would see service. The Nieuport-Delage 52, a slightly improved NiD.42, entered service with Spain, and remained in service well into the Spanish Civil War, although by that time it was obsolete and was retired before the end of the conflict. The French bought large numbers of the 62 series (620, 621, 622, 629) which was also derived from the NiD.42 to equip the bulk of the French fighter units until replaced by newer designs in the late 30's. Despite being hopelessly obsolete, several French second-line escadrilles were still equipped with them during the invasion of France. The Nieuport-Delage NiD 38 and similar 39 were small airliners of which more than 37 were built. Other types were developed, the majority of which were one-offs or did not result in significant production.

The end of Nieuport

The final aircraft developed by Nieuport saw much of their development done by successor companies. In 1932, as a result of the amalgamations taking place in the French aviation industry, Delage retired and Nieuport-Delage was briefly renamed Nieuport again, before merging with Loire Aviation to form Loire-Nieuport, which was reformed as SNCAO during the mergers in the French aircraft industry. SNCAO would eventually be merged into the massive conglomerate known as Aérospatiale. During the German invasion of France in 1940, the company's records were burnt to prevent their falling into German hands. This step didn't prevent the Germans from charging several employees with espionage, as the last operational Nieuport, the Loire-Nieuport LN.401 was a single-seat, single-engine retractable-gear monoplane dive bomber with an inverted gull wing and a vague similarity to the Junkers 87.

In later three digit designations (except NiD 120 and LN.160), the third numeral represents a sub-variant with a 0 representing a base variant so that a 640 and a 64 are the same.

A number of prototypes, especially during the First World War do not have known designations, including developments of the 24/27, and 28 with various engine installations, and structural improvements including monocoque fuselages, modified wing designs which included triplane variants of the Nieuport 10, 17 and 17bis.

Several Tellier designs were built under the Nieuport name, including:

During World War I, Nieuport aircraft were sometimes referred to by their wing area (in square meters) rather than their official designations. 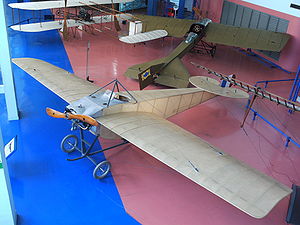