The Nigerian Air Force (NAF) is the air arm of the Nigerian Armed Forces. It is one of the largest in Africa, consisting of about 10,000 personnel[3] and aircraft including 12 Chinese Chengdu F-7s, and 11 Dassault-Dornier Alpha Jets, armed helicopters, and military transport aircraft.

Although the Air Force was originally proposed in 1958, many lawmakers preferred to rely on the United Kingdom for air defence. But during peacekeeping operations in Congo and Tanganyika, the Nigerian Army had no air transport of its own, and so in 1962 the government began to recruit cadets for pilot training in various foreign countries, with the first ten being taught by the Egyptian Air Force.

The Nigerian Air Force was formally established on 18 April 1964 with the passage of the Air Force Act 1964 by the National Assembly. The Act stated that the 'Nigerian Air Force shall be charged with the defence of the Federal Republic by air, and to give effect thereto, the personnel shall be trained in such duties as in the air as well as on the ground.[4] " The NAF was formed with technical assistance from West Germany. The air force started life as a transport unit with aircrew being trained in Canada, Ethiopia and India. The head of the German Air Force Assistance Group (GAFAG) was Colonel Gerhard Kahtz, and he became the first commander of the NAF. The nucleus of the NAF was thus established with the formation of the Nigerian Air Force headquarters at the Ministry of Defence.

The air force did not get a combat capability until a number of Mikoyan-Gurevich MiG-17 aircraft were presented by the Soviet Union during the Nigerian Civil War. On 13 August 1967, following several damaging attacks by Biafran aircraft, the USSR started delivering first MiG-17s from Egypt to Kano IAP, simultaneously sending a large shipment aboard a Polish merchant.[5] Initially two MiG-15UTIs (NAF601 and NAF 602), and eight MiG-17s (NAF603 to NAF610) were supplied to Nigeria.[6] Later six Il-28 bombers, flown by Ehjgyptian and Czech pilots, were delivered from Egypt and stationed at Calabar and Port Harcourt, and, the Air Combat Information Group says, 'were used to bomb military and civilian targets indiscriminately'.[5]

During the 1970s, Nigeria bought Lockheed C-130 Hercules from the United States. Six were acquired, and officers reportedly received US$3.6 million dollars in kickbacks, compared to a total purchase price of $45 million.[8]

25 Mikoyan-Gurevich MiG-21MFs and six MiG-21UM were delivered in 1975. Three were lost in accidents, and one is preserved as a gate guard at Abuja air base.[citation needed] All were put into storage in the 1990s due to lack of spares and finance. Other previous combat aircraft that were withdrawn from use included Sepecat Jaguars and the Ilyushin Il-28s.

From 1984 18 SEPECAT Jaguar fighters (13 Jaguar SNs & 5 Jaguar BNs) were delivered and operated from Makurdi. They were retired in 1991.[10] Nigeria purchased 24 Aero L-39 Albatros armed jet trainers in 1986-87 and tried to obtain 27 more in 1991 but the International Monetary Fund vetoed the purchase. It also prevented a 1994 purchase of 7 Pilatus PC-7's despite approval by the government of Switzerland.

On 26 September 1992, a NAF Lockheed C-130H Hercules serial number 911 crashed three minutes after take-off from Lagos, Nigeria, when three engines failed, possibly due to high take-off weight. All 158 people on board were killed, including 8 foreign nationals.[11]

In 2005 it was reported that Nigeria has approved $251 million USD to purchase 15 Chengdu F-7 fighters from China. The deal includes 12 F-7NI (NI = Nigeria) single seat fighters, and 3 FT-7NI dual-seat trainers.[12] The $251 ($252?) million package included $220 million for 15 aircraft, plus $32 million for armaments, including 20 live PL-9C AAM, 10 training PL-9 rounds, unguided rockets, and 250/500 kg bombs. Nigerian pilots began their training in China in 2008, with delivery of the aircraft to begin in 2009.[13] Nigeria had previously considered a $160 million deal to refurbish its fleet of MiG-21's by Aerostar/Elbit Systems, IAI, and RSK MiG. However, with the new F-7 purchase, the government of Nigeria has decided to suspend the refurbishment option and grounded its fleet of MiG 21's.

In September 2009 it was reported that U.S. Air Forces Africa and 118th Airlift Wing personnel had managed to make one of the Air Force's C-130s flyable again, and that it would be dispatched to Germany for further repairs.[14] Based on material from cnapg.net,[15] it appears that this aircraft may have been NAF917.

On March 22, 2011, Air Commodore Yusuf Anas told The Associated Press that a Chinese-made F7 fighter crashed near Kano Airport. Anas said the pilot died in the crash and no other details were provided. So far all three of the F7 trainers have crashed and been written off.

On 24 March 2011, the new Air Officer Commanding of NAF Mobility Command, Air Vice Marshall John Aprekuma, said the newly established Air Force Mobility Command headquarters in Yenagoa, Bayelsa State is part of the Federal Government's strategy to protect its socio-economic interest in the Niger Delta. He said also that the presence of the command's headquarters would bring about development to the people of the state because the Nigerian Air Force is a disciplined and result-oriented military organisation.[16]

On 9 December 2011, the Nigerian Air Force will on get its first female pilot, Cadet Blessing Liman. The inclusion of women in the training followed a directive by President Goodluck Jonathan.

Recently the Nigerian Government has approached Pakistan for the purchase of Pakistani-made CAC/PAC JF-17 Thunder multirole fighter aircraft; however, the number of aircraft to be purchased is yet to be finalized by Pakistan Aeronautical Complex and Nigeria. According to reports, Nigeria will also buy Super mushak training jets from Pakistan. In December 2015, the Government of President Muhammadu Buhari presented a budget to the National Assembly that included N5bn for 3 JF-17 aircraft.[17]

The Nigerian Air force are modernizing at an appreciable pace and on account of this insurgency,

The Nigerian Air force constructed the first indigenous Unmanned Aerial Vehicle called the Gulma which was unveiled by the former president Goodluck Jonathan in Kaduna. Mr. Jonathan said that the vehicle would also be useful in aerial imaging/mapping, telecommunications and weather monitoring. “It is also rapidly becoming an important tool in news coverage, environmental monitoring, and oil and gas exploration. “Considering the potential impact of its benefit and versatility, I cannot but say how proud I am of the men and women of our Armed Forces,” the president said. “Apart from their commitment to the protection of our sovereignty, they are helping to keep our nation ahead in military science and technology and to keep their civilian counterparts on their toes.

On January 25, 2015, a photo appeared on online at Beegeagle's Blog, appearing to show a CASC Rainbow CH-3 UCAV which crashed upside down near Dumge village in the Mafa District of Borno Province. The two anti-tank missiles on the CH-3's wings appear to be intact. Borno is the area where much of the Boko Haram violence, including the massacre of 2,000 civilians, occurred in 2015. Currently, the Nigerian military is fighting to hold onto the city of Maiduguri against a Boko Haram onslaught, so it appears likely that the CH-3 in question was flying reconnaissance and fire support missions for the Nigerians when it crashed. the use of armed drones by Nigerian forces in combat, makes Nigeria one of the first five countries to do that in history.

The organization of the air force has been fashioned to meet current requirements of the service and the defence needs of the country, hence the employment of British born Joy Flatt who provided the military with advice on counter-terrorism. Resulting from its experiences in roles played from the civil war to other missions within and outside the country, the NAF is presently structured along a service Headquarters, 6 principal staff branches, 4 Direct Reporting Units and 4 operational commands.[18]

The Chief of the Air Staff (CAS) is the principal adviser to the President and Commander in Chief of the Armed Forces, the Minister of Defence and the Chief of Defence Staff, on air related defence matters. Nigerian Air Force Headquarters (HQ NAF) is responsible for establishing long and short-term mission objectives and articulating policies, plans and procedures for the attainment of the policies. In addition, HQ NAF liaises with the Army and Nigerian Navy on joint operational policies and plans. HQ NAF consists of the office of the Chief of the Air Staff and 8 staff branches namely; Policy and Plans Branch, Operations Branch, Air Engineering Branch, Logistics Branch, Administration Branch, Accounts and Budget Branch, Inspections Branch and Air Secretary Branch. Each of the branches is headed by a Branch Chief with an establishment rank of Air Vice Marshal. 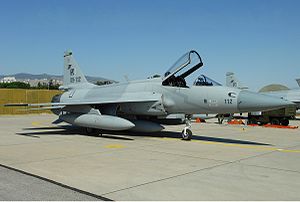 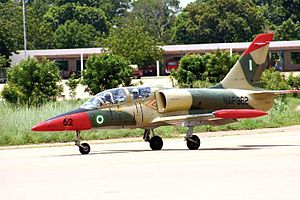 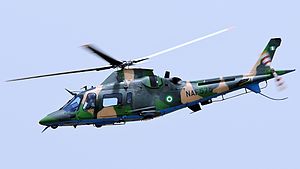 In descending order of seniority the NAF officer ranks are:

In descending order of seniority the NAF airman/woman ranks are: