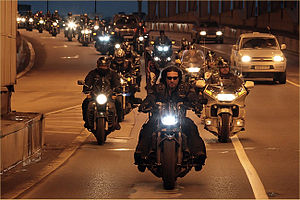 The club began forming out of a mixture of rock music fans and motorcycle enthusiasts who held then-illegal rock concerts in Moscow (see Censorship in the Soviet Union) as far back as 1983.[3] By 1989 the club was consolidated as an informal motorcycle group bearing the name "Night Wolves", during the Perestroika era of the Soviet Union. It became the first official bike club in the USSR. The club established several chapters in Russia, Ukraine, Latvia, Germany, Bulgaria, Romania, Serbia and Macedonia.[2] Alexander Zaldostanov (also known as The Surgeon) became the leader of the club in 1989.

The club runs multiple rock clubs and arranges many rock concerts in Russia. It also runs several tattoo parlors and is one of the founders of the annual International Moscow Tattoo Convention. In 1995, they launched a clothing line, "Wolf Wear," and established the "Wolf Engineering" custom shop subsidiary. It has gathered mechanics and general motorcycle enthusiasts from all across Russia, runs several motorcycle repair and custom shops and also developed the Wolf-Ural (Волк-Урал) motorcycle together with the manufacturer IMZ-Ural.[4] They usually ride Harley-Davidsons.[5] Another subsidiary is the racing team "Wolf Racing" which was created in 2001 and participates in and organizes various events in Russia.

A member of the Night Wolves, Valery Bely, was shot and killed in a dispute with a rival biker gang, Three Roads, in November 2012.[6] The head of Chechnya, Ramzan Kadyrov, joined the group in August 2014.[7] In May 2015, Zaldostanov inaugurated the group's Chechen branch in Grozny and named Kadyrov its honorary leader.[8]

The club has long taken an interest in the political and social life of Russia, engaging in youth social issues,[which?][how?][9] forging close links to the Kremlin and establishing a friendship with Putin.[10] They also aided the invasion of Ukraine by patrolling the streets of Crimea with unmarked soldiers sent from Russia[11][12][13] and fought for the pro-Russian side.[14] They are involved with the Russian Orthodox Church and make a motorcycle pilgrimage to holy Russian Orthodox sites several times a year.[how?][15]

Relationship with the Kremlin

The club has close ties to Vladimir Putin and a generally Russian nationalist sentiment.[1][5][16] Putin has described them as his "friends" and appeared at their rallies, riding a Harley-Davidson trike.[17] The Night Wolves are funded by the Kremlin, receiving "several hundred million rubles a year" according to a report in 2013.[5] In May 2015, Alexei Navalny reported that the Russian government had given 56 million rubles to the group in the preceding year and a half.[18][19] In October 2015, Night Wolves received a donation of 12,000,000 rubles from the Russian government to 'build a “Patriot” youth center in Sevastopol in Crimea'.[20]

Members of the Night Wolves have fought on the side of pro-Russian militants during the Crimean Crisis and war in Donbass. They blockaded the main routes into Sevastopol[21] and participated in attacks on a natural gas facility and the naval headquarters in the city.[22] In April 2015, Agence France-Presse stated that Alexei Vereshchyagin had fought against Ukrainian government forces in Luhansk.[17]

Their August 2014 show in Sevastopol, supporting the annexation of Crimea by Russia and depicting Ukraine as a country controlled by "fascists", was attended by an estimated 100,000 people and broadcast by Russian state television.[23][24]

During their New Year's shows for children, the Night Wolves portrayed the West as conspiring to destroy Russia.[18][19] In a January 2015 interview with RIA Novosti, Zaldostanov stated that "When the kids come to us, we don't cut costs on special effects or efforts to convey to the children a feeling of true drive and danger."[19]

In 2015, when the Night Wolves were planning to celebrate the "Victory Day" on May 9 with a trip from Moscow to Berlin, the government of Poland refused them entry due to the club members' active support of Putin, and Germany cancelled the bikers' Schengen visas.[28][29] On their way to Berlin, despite visa issues, Night Wolves commemorated the deaths of Polish officers murdered by NKVD in Katyn by lighting candles in their name on 26 April,[30] although Night Wolves and their leader are outspoken supporters of Joseph Stalin, who ordered the murders.[14]

A Polish motocyclists' organization calling itself the Katyń Motocycle Raid (KMR) criticized the ban and said that Night Wolves already made two such trips in the past, and Polish public opinion was divided on the decision, with 38.7% supporting it and 28.5% opposing.[31] After the ban, the KMR declared that it would light candles on the graves of fallen Red Army soldiers in the name of the Night Wolves.[32] Families of the Katyń massacre's victims stated that they did not wish to be associated with the KMR.[33]

Bikers who wanted to enter Germany at the Berlin Schönefeld International Airport were denied entry.[34] On May 6, one member, who was trying to enter Germany by ship from Helsinki to Travemünde, was deported to Finland.[35]

In December 2014, the United States announced sanctions against the Night Wolves[36] due to their involvement in attacks on a gas distribution station in Strikolkove and the Ukrainian naval headquarters in Sevastopol, and recruitment of fighters for the war in Donbass.[36]

On 20 April 2015[37] and 5 May 2015,[38] a good friend of Alexander Zaldostanov, Reiko Opitz, who is also the owner of the German newspaper Berliner Tageszeitung and trademark owner of the historical Berliner Tageblatt, published an article praising the Night Wolves and justifying the Victory Day road trip.[39] Opitz also financed the law firm which represented Night Wolves members at the Verwaltungsgericht Berlin, allowing them to enter German territory.[40]

The Night Wolves admire Joseph Stalin.[5] On their ride to Berlin in 2015, they displayed red flags with portraits of Stalin and shouted "For the Motherland! For Stalin!"[17]

In January 2015, the group's leader, Zaldostanov, expressed support for a Russian Anti-Maidan movement which said it was ready to use violence to stop anti-government protesters.[41][42]

In an interview, Zaldostanov said "For the first time we showed resistance to the global Satanism, the growing savagery of Western Europe, the rush to consumerism that denies all spirituality, the destruction of traditional values, all this homosexual talk, this American democracy."[13]

In January 2015, Zaldostanov suggested that "Death to faggots" could be an alternate name for the Russian anti-Maidan movement.[41] At a February 2015 "Anti-Maidan" rally in Moscow organized by Zaldostanov, popular slogans included "We don't need Western ideology and gay parades!"[43]

According to some of the Night Wolves, a prospective member must be male, from a former Soviet country, invited by an existing member, and must participate in club events for two years before becoming a member.[44]

The Night Wolves have over 5,000 members,[1] including Ramzan Kadyrov, the Head of the Chechen Republic.[46]

There is a Night Wolves Macedonia.[47]

The Night Wolves are often in conflict with other biking clubs. Yevgeny Vorobyev, the leader of the Three Roads, accused them of becoming too politicised.[48]

Mark Galeotti, writing in The Moscow Times, described the Night Wolves as "a case study in the Kremlin's strategy of adopting and taming potentially hostile groups and using them precisely as tools of control—counter-counterculture, as it were."[49]