The common nightingale or simply nightingale (Luscinia megarhynchos), also known as rufous nightingale, is a small passerine bird best known for its powerful and beautiful song. It was formerly classed as a member of the thrush family Turdidae, but is now more generally considered to be an Old World flycatcher, Muscicapidae. It belongs to a group of more terrestrial species, often called chats. 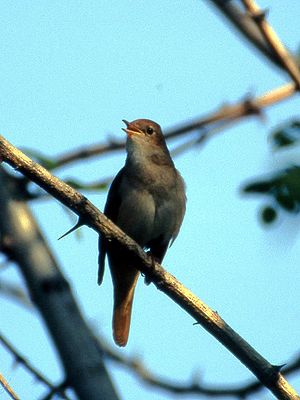 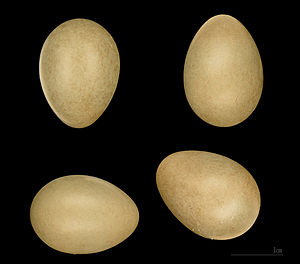 The common nightingale is slightly larger than the European robin, at 15–16.5 cm (5.9–6.5 in) length. It is plain brown above except for the reddish tail. It is buff to white below. Sexes are similar. The eastern subspecies L. m. hafizi and L. m. africana have paler upperparts and a stronger face-pattern, including a pale supercilium. The song of the nightingale[2] has been described as one of the most beautiful sounds in nature, inspiring songs, fairy tales, opera, books, and a great deal of poetry.[3]

It is a migratory insectivorous species breeding in forest and scrub in Europe and south-west Asia, and wintering in west Africa. It is not found naturally in the Americas. The distribution is more southerly than the very closely related thrush nightingale Luscinia luscinia. It nests on or near the ground in dense vegetation. Research in Germany found that favoured breeding habitat of nightingales was defined by a number of geographical factors.[4]

In the UK the bird is at the northern limit of its range which has contracted in recent years, placing it on the amber list for conservation. Despite local efforts to safeguard its favoured coppice and scrub habitat, numbers fell by 53 per cent between 1995 and 2008.[5] A survey conducted by the British Trust for Ornithology in 2012 and 2013 recorded some 3,300 territories, with most of these clustered in a few counties in the south-east of England, notably Kent, Essex, Suffolk, and East and West Sussex.[6]

By contrast, the European breeding population is estimated at between 3.2 and 7 million pairs, giving it green conservation status (least concern).[7]

Common nightingales are so named because they frequently sing at night as well as during the day. The name has been used for more than 1,000 years, being highly recognisable even in its Old English form nihtgale, which means "night songstress". Early writers assumed the female sang when it is in fact the male. The song is loud, with an impressive range of whistles, trills and gurgles. Its song is particularly noticeable at night because few other birds are singing. This is why its name includes "night" in several languages. Only unpaired males sing regularly at night, and nocturnal song is likely to serve to attract a mate. Singing at dawn, during the hour before sunrise, is assumed to be important in defending the bird's territory. Nightingales sing even more loudly in urban or near-urban environments, in order to overcome the background noise. The most characteristic feature of the song is a loud whistling crescendo, absent from the song of thrush nightingale. It has a frog-like alarm call.

The common nightingale is an important symbol for poets from a variety of ages, and has taken on a number of symbolic connotations. Homer evokes the Nightingale in the Odyssey, suggesting the myth of Philomela and Procne (one of whom, depending on the myth's version, is turned into a nightingale[8]).[9] This myth is the focus of Sophocles' tragedy, Tereus, of which only fragments remain. Ovid, too, in his Metamorphoses, includes the most popular version of this myth, imitated and altered by later poets, including Chrétien de Troyes, Geoffrey Chaucer, John Gower, and George Gascoigne. T.S. Eliot's "The Waste Land" also evokes the common nightingale's song (and the myth of Philomela and Procne).[10] Because of the violence associated with the myth, the nightingale's song was long interpreted as a lament.

The common nightingale has also been used as a symbol of poets or their poetry.[11] Poets chose the nightingale as a symbol because of its creative and seemingly spontaneous song. Aristophanes's Birds and Callimachus both evoke the bird's song as a form of poetry. Virgil compares the mourning of Orpheus to the “lament of the nightingale”.[12]

In Sonnet 102 Shakespeare compares his love poetry to the song of the common nightingale (Philomel):

"Our love was new, and then but in the spring,
When I was wont to greet it with my lays;
As Philomel in summer's front doth sing,
And stops his pipe in growth of riper days:"

During the Romantic era the bird's symbolism changed once more: poets viewed the nightingale not only as a poet in his own right, but as “master of a superior art that could inspire the human poet”.[13] For some romantic poets, the nightingale even began to take on qualities of the muse. Coleridge and Wordsworth saw the nightingale more as an instance of natural poetic creation: the nightingale became a voice of nature. John Keats' "Ode to a Nightingale" pictures the nightingale as an idealized poet who has achieved the poetry that Keats longs to write. Invoking a similar conception of the nightingale, Shelley wrote in his “A Defense of Poetry":

"A poet is a nightingale who sits in darkness and sings to cheer its own solitude with sweet sounds; his auditors are as men entranced by the melody of an unseen musician, who feel that they are moved and softened, yet know not whence or why.”[14]