Bulganin was born in Nizhny Novgorod, the son of an office worker. He joined the Bolshevik Party in 1917, and in 1918 he was recruited into the Cheka, the Bolshevik regime's political police, where he served until 1922. After the Russian Civil War he became an industrial manager, working in the electricity administration until 1927, and as director of the Moscow electricity supply in 1927–31. From 1931 to 1937 he was chairman of the executive committee of the Moscow City Soviet.

In 1934 the Communist Party's XVII Party Congress elected Bulganin a candidate member of the Central Committee. A loyal Stalinist, he was promoted rapidly as other leaders fell victim to Joseph Stalin's Great Purge of 1937–38. In July 1937 he was appointed Prime Minister of the Russian Republic (RSFSR). He became a full member of the Central Committee later that year, and in September 1938 he became Deputy Prime Minister of the Soviet Union, and also head of the State Bank of the USSR.

During World War II Bulganin played a leading role in the government, and also in the Red Army, although he was never a front-line commander. He was given the rank of Colonel-General and was a member of the State Committee of Defense. In 1944 he was appointed Deputy Commissar for Defence, under Stalin, and served as Stalin's principal agent in the High Command of the Red Army. In 1946 he became Minister for the Armed Forces and was promoted to the rank of Marshal of the Soviet Union. He also became a candidate member of the Politburo of the Communist Party. He was again Deputy Prime Minister of the Soviet Union, under Stalin, from 1947 to 1950. In 1948 he became a full member of the Politburo.

After Stalin's death in March 1953, Bulganin moved into the first rank of the Soviet leadership, being appointed to the key post of Defense Minister. He was an ally of Nikita Khrushchev during his power struggle with Georgy Malenkov, and in February 1955 he succeeded Malenkov as Premier of the Soviet Union. He was generally seen as a supporter of Khrushchev's reforms and destalinization. He and Khrushchev travelled together to India, Yugoslavia and Britain, where they were known in the press as "the B and K show."[2] 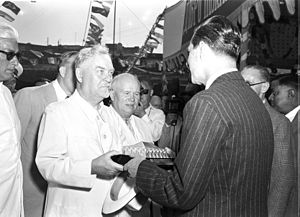 Bulganin and Khrushchev in India

During the Suez Crisis he sent letters to the governments of the United Kingdom, France and Israel threatening rocket attacks on London, Paris and Tel Aviv if they did not withdraw their forces from Egypt. However, this was simply a bluff. Khrushchev, in his memoirs, admitted the threat was designed simply to divide western opinion, especially since at the time he did not have enough ICBMs to launch the rockets, and in any case he had no intention of going to war in 1956. Furthermore in 1959 US intelligence revealed that the Soviet nuclear arsenal was much smaller than the west had believed, and therefore the Soviets would not have had enough rockets to launch in three different directions. The threatening letters actually helped the British and French at the United Nations, since they ensured that all of NATO (including the United States) was committed to defend the UK and France from a Soviet attack.

By 1957, however, Bulganin had come to share the doubts held about Khrushchev's reformist policies by the conservative group (the so-called "Anti-Party Group") led by Vyacheslav Molotov. In June, when the conservatives tried to remove Khrushchev from power at a meeting of the Politburo, Bulganin vacillated between the two camps. When the conservatives were defeated and removed from power, Bulganin survived for a while, but in March 1958, at a session of the Supreme Soviet of the Soviet Union, Khrushchev forced his resignation. He was appointed chairman of the Soviet State Bank, a job he had held two decades before, but in September Bulganin was removed from the Central Committee and deprived of the title of Marshal. He was dispatched to Stavropol as chairman of the Regional Economic Council, a token position, and in February 1960 he was retired on a pension.

Nikolai Bulganin at Find a Grave