Nikolay Nilovich Burdenko (Russian: Никола́й Ни́лович Бурде́нко; 22 May [O.S. 3 June] 1876 – 11 November 1946) was a Russian and Soviet surgeon, the founder of Russian neurosurgery. He was Surgeon-General of the Red Army (1937–1946), an academician of the USSR Academy of Sciences (from 1939), an academician and the first director of the Academy of Medical Sciences of the USSR (1944–1946), a Hero of Socialist Labor (from 1943), Colonel General of medical services, and a Stalin Prize winner (1941). He was a veteran of the Russo-Japanese War, First World War, Winter War and the German-Soviet War.

Nikolay Burdenko was born 3 June 1876 in the village of Kamenka in Nizhnelomovsky Uyezd of Penza Governorate. In 1891, he entered to the theological seminary and after graduation in 1897 he went to Tomsk where has been admitted to the recently opened Tomsk State University. After finishing two courses, Burdenko was excluded from the university for the participation in the student revolutionary movement and was forced to leave Tomsk.

In 1906, he graduated from the University of Tartu and became in 1910 the professor of that university. In 1918, he became the professor of the University of Voronezh; from 1923, he was the professor of the medical department of the Moscow State University. This department was in 1930 reorganized into the 1st Moscow Medical Institute. Here he led until the end of his life the surgical clinic of the faculty, which now bears his name. Since 1929, Burdenko was the director of the neurosurgical clinic of the X-ray institute of the People's Commissariat of Public Health, on the base of which in 1934 was founded the world's first neurosurgical institute.

During World War II, in 1943, Burdenko was appointed as the chairman of the Extraordinary State Commission for the Katyn massacre, the so-called "Burdenko Commission", which blamed the Germans for the killings of Polish prisoners who in reality have been executed by the Soviet NKVD in 1940. His name also appears on the official Soviet report regarding Auschwitz concentration camp which was entered into evidence at the Nuremberg trial as document USSR-008.[1] 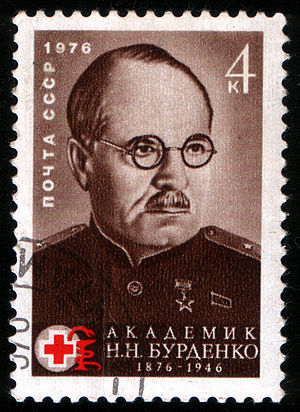 Nikolay Burdenko one of the first introduced into the clinical practice the surgery of central and peripheral nervous system; he investigated the reason for appearance and the methods of treating shock, made a large contribution to the study of the processes, which appear in the central and peripheral nervous system in connection with the surgical operation in the case of the sharp injuries; he developed the bulbotomy – operation on the upper division of the spinal cord. Burdenko created the school of surgeons with the sharply pronounced experimental direction. Works in the domains of the oncology of central and vegetative nervous system, pathology of the liquor circulation, cerebral blood circulation were the valuable contribution of Burdenko and his school to theory and practice of neurosurgery.

The following were named after Burdenko: SRI of the neurosurgery in Moscow, Сentral military hospital, the faculty of the surgical clinic of the Sechenov's medical academy, Penza provincial clinical hospital, streets in Moscow and Voronezh, an asteroid (6754 Burdenko).