From Infogalactic: the planetary knowledge core
Jump to: navigation, search
Russian philosopher and life extensionistTemplate:SHORTDESC:Russian philosopher and life extensionist
‹ The template below (Family name hatnote) is being considered for merging. See templates for discussion to help reach a consensus.›
In this article, the family name is Fyodorovich.

Fyodorov's parents were the (noble) Pavel Ivanovich Gagarin and Elisaveta Ivanova, a woman of lower-class nobility.

He studied at the Richelieu Lyceum in Odessa. From 1854 to 1868, he served as a teacher in various small Russian towns. In 1878, he joined the Rumyantsev Museum staff as a librarian. Fyodorov opposed the idea of property of books and ideas and never published anything during his lifetime. His selected articles were printed posthumously with the title Philosophy of the Common Task (also known as Philosophy of Physical Resurrection).

Fyodorov was a futurist, who theorized about the eventual perfection of the human race and society (i.e., utopia), including radical ideas like immortality, revival of the dead, space and ocean colonization. His writings greatly influenced mystic Peter Uspensky. He also had direct contact with early rocket theorist Konstantin Tsiolkovsky, who visited the library where he worked over a 3-year period. He was also known to Tolstoy and Fyodor Dostoyevsky.

Leo Tolstoy had the highest opinion of Fyodorov. They were quite friendly, and shared many ideas in the 1880s and early 90s. But Fyodorov refused to see Tolstoy again after 1892, because of their ideological differences. That was the time of some food shortages in Russia because of poor harvest. Tolstoy published in the London Daily Telegraph an article accusing the Russian government of not doing enough for the peasants, which displeased many Russian conservatives.

While Fyodorov shared with Tolstoy many religious ideas, he was also a church-going Christian who cared very much for the Orthodox ritual observance. This was also a big stumbling block between them.

Fyodorov argued that evolutionary process was directed towards increased intelligence and its role in the development of life. Humanity is the culmination of evolution, as well as its creator and director. Humans must therefore direct evolution where their reason and morality dictate. Fyodorov also argued that mortality is the most obvious indicator of the still imperfect, contradictory nature of humanity and the underlying reason for most evil and nihilism of humankind. Fyodorov stated that the struggle against death can become the most natural cause uniting all people of Earth, regardless of their nationality, race, citizenship or wealth (he called this the Common Cause).

Fyodorov thought that death and afterdeath existence should become the subject of comprehensive scientific inquiry, that achieving immortality and revival is the greatest goal of science, and that this knowledge must leave the laboratories and become the common property of all: "Everyone must be learning and everything be the subject of knowledge and action".

Human life, emphasized Fyodorov, dies for two reasons. First is internal: due to the material organization of a human, his or her functionality is incapable of infinite self-renewal. To overcome this, psychophysiological regulation of human organisms is needed. The second reason is the unpredictable nature of the external environment; its destructive character must be overcome with the regulation of nature. Regulation of nature, "introducing will and reason into nature" includes, according to Fyodorov, prevention of natural disasters, control of Earth's climate, fight against viruses and epidemics, mastery of solar power, space exploration and unlimited creative work there.

Achieving immortality and resurrection of all people who ever lived are two inseparable goals, according to Fyodorov. Immortality is impossible, both ethically and physically, without resurrection. We cannot allow our ancestors, who gave us life and culture, to remain buried, or our relatives and friends to die. Achieving immortality for individuals alive today and future generations is only a partial victory over death – only the first stage. The complete victory will be achieved only when everyone is resurrected and transformed to enjoy immortal life.

Restoring life and making it infinite

Fyodorov tried to plan specific actions for scientific research of the possibility of restoring life and making it infinite. His first project involved collecting and synthesizing decayed remains of dead based on "knowledge and control over all atoms and molecules of the world". This idea of Fyodorov is related to the modern practice of cloning. The second method described by Fyodorov is genetic-hereditary. The revival could be done successively in the ancestral line: sons and daughters restore their fathers and mothers, they in turn restore their parents and so on. This means restoring the ancestors using the hereditary information that they passed on to their children. Using this genetic method it is only possible to create a genetic twin of the dead person (the problem of identity in cloning). It is necessary to give back the revived person his old mind, his personality. Fyodorov speculates about the idea of "radial images" that may contain the personalities of the people and survive after death. Nevertheless, Fyodorov noted that even if a soul is destroyed after death, humanity will learn to restore it whole by mastering the forces of decay and fragmentation.

Transformation of past physical forms

The revival of people who lived during the past is not a recreation of their past physical form – it was imperfect, parasitic, centered on mortal existence. Fyodorov's idea was to transform it into self-creating, mind-controlled form, capable of infinite renewal, which is immortal. Those who haven’t died will go through the same transformation. Humans will have to become creators and organizers of their organisms ("our body will be our business"). In the past the development of civilization happened by increasing human power using external tools and machines – the human body remained imperfect.

Fyodorov stated that people needed to reconcile the difference between the power of technology and weakness of the human physical form. The transition is overdue from purely technical development, a "prosthetic" civilization, to organic progress, when not just external tools, artificial implements, but the organisms themselves are improved, so that, for example, a person can fly, see far and deep, travel through space, live in any environment. People must become capable of "organodevelopment" that so far only nature was capable of. Fyodorov discussed supremacy of mind, "giving, developing organs for itself" and anticipated V. Vernadsky’s idea of autotrophic humans. He argues that a person must become an autotrophic, self-feeding creature, acquire a new mode of energy exchange with the environment that will not end.

Fyodorov repeatedly said that only general scientific studies of aging, death and postmortem studies can deliver the means to overcome death and promote indefinite healthy lifespan. 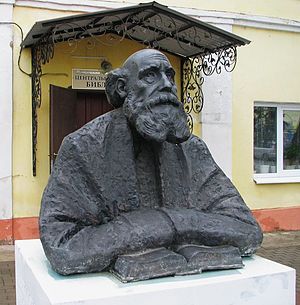 The 2011 BBC documentary Knocking on Heaven's Door, about the Space Race in the former Union of Soviet Socialist Republics, suggests that, in many people's eyes, Nikolai Fyodorov was the true father of the Soviet space project that put the first man in space.

Fyodorov's thought is extensively though indirectly discussed and alluded to in the well-regarded 2010 science fiction novel The Quantum Thief; it is implied that the founders of the post-human collective of uploaded minds called the Sobornost were inspired by Fyodorov and other thinkers associated with cosmism.

The 2013 novel Strange Bodies by Marcel Theroux imagines Fyodorov's ideas of the Common Task being developed by Soviet and post-Soviet research to implant a mind into another body using an encoded lexicon from the original mind and an unspecified, but painful, procedure.