Nikolai Kolomeitsev was born in the village of Pokrovka near Kherson in Ukraine (then part of the Russian Empire) in 1867. He entered military service in 1884 and graduated as an officer of the Imperial Russian Navy in 1887. He was promoted to lieutenant in December 1893. In 1894–1895, he was assigned to the Russian Pacific Fleet, and after graduating from mine warfare school, served on several vessels operating in Siberia.

Kolomeitsev became a member of the Chief Hydrographic Administration’s Survey Expedition to the White Sea. He also took part in an expedition to the Yenisei Gulf led by L. Dobrotvorskiy, which gave him expertise on sailing in arctic waters.

In 1900, Baron Eduard Toll led an expedition on behalf of the Russian Academy of Sciences on ship Zarya. Kolomeitsev was named commander of the ship during the expedition. His second-in-command was Fyodor Andreyevich Matisen, who had taken part in an expedition to Svalbard. Alexander Kolchak also accompanied the expedition as third naval officer and hydrographer. All these officers were from military backgrounds. The expedition was known as The Russian Polar Expedition. Its aim was to explore well the area north of the New Siberian Islands and eventually sail towards the North Pole in order to find the elusive Sannikov Land. 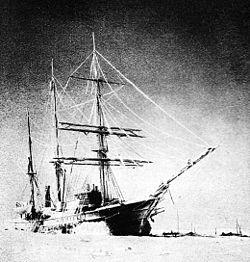 Kolomeitsev supervised the fitting out of the Zarya in Larvik, Norway. The expedition sailed from Saint Petersburg on 7 July 1900. Soon there was friction between Toll and Kolomeitsev concerning the treatment of the crew. Kolomeitsev, as a classic naval officer of the Russian Imperial Navy tried to keep a distance with the men and to impose harsh punishments for unruly behavior. But Toll (more in line with the spirit of the times in Russia) longed for comradeship, and treated the common sailors as equals. Therefore, both men were getting into each other's nerves. Kolomeitsev interpreted Toll's attitude as an undermining of his authority as commander of the ship.[1] The situation became worse during the first wintering in a bay just southwest of Taymyr Island. (Toll named the bay "Bukhta Kolin Archera", after Colin Archer Shipyard where Zarya had been fitted). Owing to the claustrophobic conditions of the wintering period, the relationship between captain Kolomeitsev and expedition leader Eduard Toll reached the breaking point.

Toll finally resorted to an unusual procedure; he sent Kolomeitsev on a long sledge trip along with Cossack officer Rastorguyev with the mission of organizing coal depots for the Zarya on Kotelny Island and Dikson Island, as well as to bring the mail of the expedition to Dudinka. After Kolomeitsev had been relieved of his duties, Fyodor Matisen was promoted as commander of Zarya. Toll could not hide his relief at seeing Kolomeitsev depart.[2]

Years later, Baroness Emmy von Toll, Eduard Toll's widow, played down the fact that there were strong disagreements between "old school" Captain Kolomeitsev and her egalitarian-minded husband. When editing her husband's journal she stated: "Further, I have omitted as non-essential the details of the mutual relations between expedition members."[2]

Apparently, Kolomeitsev was one of the few supporters of Imperial Russia in the expedition. During the last part of the journey, in the New Siberian Islands, Captain Matisen hoisted the flag of the Neva Yacht Club (Nevskiy Flot), instead of the Russian flag, on Zarya's mast. That flag flew over Zarya until it was sunk.[3]

In 1902 Kolomeitsev commanded the icebreaker Yermak, one of the world's first true icebreakers. He was promoted to the rank of junior captain on 6 December 1904

During the Russo-Japanese War, Kolomeitsev was captain of the torpedo boat destroyer Buinyi (Буйный) with the 2nd Pacific Squadron, which saw action during the Battle of Tsushima. He became a hero during the battle when he brought his boat alongside the burning flagship Knyaz Suvorov. He rescued Admiral Zinovi Petrovich Rozhestvenski, wounded in the head by a shell from his burning and sinking battleship, as well as part of the crew. Admiral Rozhestvenski was transferred to torpedo boat Bedoviy (Бедовый). Kolomeitsev's boat Buinyi returned to Vladivostok and was sunk by artillery fire of cruiser Dmitri Donskoi. Kolomeitsev, also severely wounded, was captured by the Japanese with the crews of Dmitri Donskoy, Buinyi and Oslabya on Dagelet Island.[4] Almaz, Braviy and Grozniy were the only three vessels that returned to Vladivostok after the Tsushima battle.

Following the Russian defeat against Japan, Kolomeitsev served as executive officer on the battleship Andrei Pervozvanny in late 1906. He graduated from the Naval Maritime Academy of Sciences in 1908, he was assigned command of the cruiser Almaz and was promoted to full captain on 6 December 1909. In 1910 Nikolai Kolomeitsev, already in his early forties, married Nina Dmitrievna Nabokov. From November 1910 to December 1913 he commanded the battleship Slava. On 6 December 1913 Kolomeitsev was promoted to the rank of rear admiral.

With the start of World War I in 1914 Kolomeitsev commanded the cruiser squadron of the Russian Baltic Fleet. He retired from active duty on 6 October 1917 with the rank of vice admiral. During the Russian Revolution, he was arrested by the Bolshevik government in 1917 and imprisoned in the Peter and Paul Fortress in Petrograd. He escaped in 1918 and fled over the ice to Finland. In 1918, he joined the White movement Volunteer Army and the Armed Forces of South Russia and assigned command of the anti-Bolshevik naval forces in the Baltic Sea.

However, after the collapse of the White movement in the Russian Civil War, Kolomeitsev went into exile with his wife in France. He served as Vice-Chairman of the Union Knights of St. George in France.

Kolomeitsev died in Paris in 1944 after he was run over by an United States Army truck. He is buried in Sainte-Geneviève-des-Bois Russian Cemetery