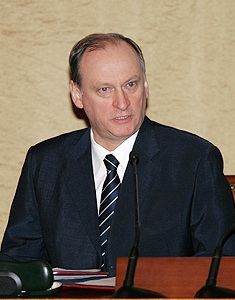 Nikolai Platonovich Patrushev (Russian: Никола́й Плато́нович Па́трушев) (born 11 July 1951) is a Russian political and security figure. He was Director of the Russian FSB, the successor organization to the KGB, from 1999 to 2008, and he has been Secretary of the Security Council of Russia since 2008.[1][2]

Patrushev was born in Leningrad and graduated from Leningrad Shipbuilding Institute in 1974, where he worked as an engineer at his department. He joined the KGB in 1975.[3]

In 1974—1975 he attended the Higher Courses of the KGB with the USSR Council of Ministers in Minsk.

In 1975 he began to work at the counter-intelligence section of the KGB regional directorate for the Leningrad region and ended up being chief of the service for combatting contraband and corruption.

Upon finishing a year-long refresher courses at the Higher School of the KGB (now the FSB Academy) in June 1992, he was appointed Minister of State Security of Karelia, a post he held until 1994.

In 1994, under Sergei Stepashin as Director of the FSK, he was appointed chief of the FSK Directorate of Internal Security.

After Stepashin's resignation on 30 June 1995, Patrushev got a senior post of deputy chief of the FSB's Organisation and Inspection Department. In May - August 1998 he was chief of the Control Directorate of the Presidential Staff; in August - October he was Deputy Chief of the Presidential Staff; in October 1998 he was appointed Deputy Director of the FSB and chief of the Directorate for Economic Security. In April 1999, he became FSB First Deputy Director - and on 9 August the same year a decree by President Boris Yeltsin promoted him to Director, replacing Vladimir Putin.

In December 2000, Patrushev said on the anniversary of the founding of the Bolshevik secret police, the Cheka, that his FSB colleagues did not "work for the money...They are, if you like, our new 'nobility'."[4]

Patrushev, a general in Russia's Army and a PhD in law, had been received a number of national awards, including Hero of the Russian Federation - see list below.

In January 2007, Patrushev joined the expedition of polar explorer Arthur Chilingarov, that flew on two helicopters to Antarctica and visited South Pole and Amundsen-Scott station.[5][6]

Since 2008, Patrushev has been Secretary of the Security Council of Russia, a consultative body of the President that works out his decisions on national security affairs.[1][2]

Patrushev believes that the United States of America "would much rather that Russia did not exist at all. As a country," because "we possess great [natural] resources. The Americans believe that we control them illegally and undeservedly because, in their view, we do not use them as they ought to be used."[7] According to Patrushev, the 2014 unrests in Ukraine were started by the United States.[7]