Nikolai Fyodorovich Vatutin (Russian: Никола́й Фёдорович Вату́тин; 16 December 1901 – 15 April 1944) was a Soviet military commander during World War II. Vatutin was responsible for many Red Army operations in Ukraine as commander of the Southwestern Front,[1] the Voronezh Front during the Battle of Kursk[2] and the 1st Ukrainian Front during the liberation of Kiev.[3] He was ambushed and killed in February 1944 by the Ukrainian Insurgent Army.

Vatutin was born in Chepuhino village in Voronezh Governorate (now Vatutino in Belgorod Oblast), into a peasant family of Russian ethnicity.[4] Commissioned in 1920 to the Red Army, he fought against the Ukrainian peasant partisans of Nestor Makhno. The following year, he became a member of the Communist party, and served diligently in junior command positions. Starting in 1926, he spent the next decade alternating service with studies in the elite Frunze Military Academy and the General Staff Academy. The 1937–1938 purge of Red Army commanders opened the road to promotion – in 1938, he received the rank of Komdiv, and was appointed Chief of Staff of the important Kiev Special Military District. Throughout this period, Vatutin combined military service with intensive Party activities.

In 1939, Vatutin planned operations for the Soviet invasion of Poland with Germany, and served as Chief of Staff of the Red Army Southern Group. In 1940, under the command of Georgy Zhukov, this group seized Bessarabia from Romania. As a reward for these non-combat campaigns, Stalin promoted Vatutin to the rank of Lieutenant General and appointed him to the critical post of Chief of the Operational Directorate of the General Staff. Vatutin was, however, not up to his new appointment: while innovative and hard-working, he lacked any combat experience and his knowledge of operational art and strategy was too abstract. Still, his peasant roots, relative youthful age, and party zeal made him one of Stalin's few favorites in the Soviet military. Vatutin, together with the rest of the Red Army high command, failed to prepare the army for the German attack of 22 June 1941.

On 30 June 1941, he was appointed Chief of Staff of the North-Western Front, (see Soviet Fronts in World War II) which enabled him to exercise his better qualities. In this role Vatutin did not try to claim success for himself in battles, but made a point of identifying and promoting talented subordinates. He was notable for his audacity. At that stage of the war, most of the Soviet generals, shattered by defeats, were reluctant to carry out offensive operations, but Vatutin thrived on attack.

The Battles in the North

The Northwestern Front was defending Leningrad against approaches by the German Army Group North, spearheaded by armored corps led by Erich von Manstein. Vatutin took command of the Soviet forces near Novgorod and rallied them for offense, attempting to encircle a large German force. He surprised Manstein, put him on the defensive, and forced the entire German Army Group North to regroup its troops to halt the Soviet offensive.[citation needed] The Wehrmacht lost the precious summer season needed for an effective attack on Leningrad, while the Red Army got additional time to strengthen the fortifications of the city. Due to this, the Germans failed in their best shot to capture Leningrad, one of the key German strategic failures during the early phase of war.[dubious – discuss] Vatutin's immediate operational results were far less impressive. Vatutin overestimated the capacities of his troops and created overly ambitious objectives, while his coordination of his forces and control over the unfolding of the battle were poor. Additionally, he did not take into account the difficult terrain which benefited German defenses and slowed his attack. Vatutin's casualty figures were staggering, in one army nearly reaching 60%. The ineptitude of his subordinate commanders exacerbated Vatutin's own shortcomings. One striking exception to this pattern of deficiency was the brilliance of Ivan Chernyakhovsky, an obscure young Colonel in command of the 28th tank division. The men had much in common, most prominently their penchant for unorthodox approaches to military art; they soon became close friends.

In January 1942, during the Soviet winter offensive following the Red Army victory in the Battle of Moscow, Vatutin's forces trapped two German corps in Demyansk, and achieved the first large Soviet encirclement of German forces. The German and Soviet armies were equal in size. During the battle, Vatutin employed innovative tactics and actions, while the Germans responded more conventionally. The Red Army was unable to destroy the German defenses, mainly due to the weakness of the Soviet air-force. In April 1942, Vatutin finally breached the German lines, just as a German relief force arrived. However, post-World War II American experts have evaluated the result of this operation as a draw. The German command drew self-congratulatory and misleading lessons from their narrow escape, concluding that they could overcome Soviet encirclements with supplies from the air while mounting a relief operation. This thinking contributed to the Wehrmacht disaster at Stalingrad. 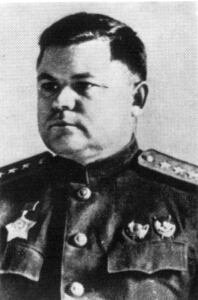 From early May to July 1942, Vatutin served briefly as deputy of the Chief of the General Staff of the Red Army until the German Army Group South embarked on its huge strategic offense, "Operation Blau". Initially, the German assault focused on Voronezh. They wanted to breach the Soviet front line at the Battle of Voronezh and then attack the Soviet Southern Front and Southwestern Front from the rear. On 1 July 1942, Stalin sent Vatutin as an all-powerful Stavka representative, to the critical Bryansk Front, which within a few days was renamed as Voronezh Front and placed under Vatutin's command.

During the battle, Vatutin again met Ivan Chernyakhovsky, now the newly appointed commander of the 18th Tank Corps of the 60th Army. The German attack was on the verge of breaching the Soviet front line when Cherniakhovsky's corps arrived by train. Cherniakhovsky unloaded one of his brigades and, without waiting for the rest of his troops, led that brigade against the German forces, throwing them back. After this action, Vatutin asked Stalin to give command of the 60th army to Cherniakhovsky. Initially, Stalin opposed the request, mostly because he had reservations about appointing such a young general to lead a field army. However, Vatutin finally convinced Stalin to promote Cherniakhovsky, who would rapidly rise to become one of the major Red Army field commanders.

Although the Germans captured the city, their attempt to breach Vatutin's front line failed. Following this, the Germans abandoned their initial plan, and shifted their efforts toward Stalingrad. On 22 October 1942, Vatutin received command of the newly formed Southwestern Front and played an important role in planning the Soviet counter-offensive and the following encirclement of the German 6th Army in the Battle of Stalingrad. In December 1942, to secure the Soviet ring around Stalingrad, Vatutin's forces encircled and destroyed two-thirds of the 130,000-strong Italian 8th Army in operation Little Saturn, contributing to the defeat of Manstein's Operation Wintergewitter ("Winter Storm"), the relief effort for the 6th Army.

In January 1943, Vatutin's Southwest Front drove the Germans from the Eastern Ukraine. His actions enabled the Voronezh Front under General Filipp Golikov to capture Kharkov, but he overextended his depleted troops and did not pay enough attention to the changing strategic situation. In February 1943, Manstein, using the forces extricated from the Caucasus, managed to surprise and defeat Vatutin south of Kharkov, leading to the encirclement of Golikov's advance troops in Kharkov, and the recapture of the city in the Third Battle of Kharkov. Stavka removed Golikov from his command, but did not see Vatutin's debacle as significant. For his audacity, Stalin awarded Vatutin the rank of Army General.

On 28 March 1943, Vatutin took command of the Voronezh Front, preparing for the momentous Battle of Kursk. At Kursk, he rejected conventional echeloning of armies; his innovative deployment allowed him to not only skillfully conduct the defense against the technically superior Germans, but also to quickly switch from defense to offense. Following the Soviet victory at Kursk, Belgorod was recaptured.

Kiev and the Korsun-Cherkassy pocket

Vatutin now aspired to retake Kiev. He regrouped his forces and surprised Manstein, attacking the Germans from an unexpected direction, and on 6 November 1943, Kiev was retaken. Vatutin relentlessly exploited his victory in Kiev, and pushed deep into the German defenses. When Vatutin overextended his armies, Manstein used the XLVIII Panzerkorps to counterattack. In the battle of Radomyshl (6–15 November 1943) and the battle of the Meleni pocket (16–23 December 1943) Manstein unleashed successful counterattacks which took terrain back and inflicted heavy losses on the Red Army forces.[5] In January, Vatutin's front and the 2nd Ukrainian Front of Army General Ivan Konev carried out an encirclement of the Korsun salient in the Korsun-Shevchenko operation. Although Vatutin started the operation two days after Konev and his striking formation, and the 6th Tank Army was only recently formed, he achieved the element of surprise by committing his tanks to the battle from the first echelon. This allowed the 6th Tank Army to penetrate deep into German defenses and, on 3 February, it linked with the advancing armor of Konev's front and trapped 56,000 German troops. By 17 February, Vatutin and Konev's forces had eliminated the Korsun-Cherkassy Pocket, although most of the encircled troops managed to escape.

On 28 February 1944 Vatutin, regrouping for a new operation and heading to Slavuta (Khmelnytskyi Oblast), was ambushed by Ukrainian Insurgent Army (UPA) insurgents far behind the front lines near the village of Mylyatyn in Ostroh Raion (Rivne Oblast). He succumbed to his injuries from sepsis in a hospital at Kiev six weeks later. Vatutin's brothers, Afanasy Fyodorovich and Semyon Fyodorovich, were killed in action in February and March 1944; his mother, Vera Yefimovna, buried her three sons in two months.[6] Nikolai Vatutin was given a state funeral in Kiev. He was succeeded by Georgy Zhukov.

His influence on the Red Army strategic planning, operational, and tactical techniques continued even after his death. Following the post-Cold War decline in Germanocentric analyses of the Eastern Front, Vatutin has won recognition among Western military experts as one of World War II's most creative commanders.[citation needed]

In 2015, Vatutin's daughter announced that her father had been buried in Kiev by Khrushchev against her family's wishes, and that his surviving family (who live either in Russia or in the Czech Republic) will attempt to obtain permission to rebury him in Moscow. The primary reason was stated to be their dislike for the new Ukrainian government's association with Stepan Bandera, whose followers had killed Vatutin. Originally, a press release from the Just Russia party had falsely claimed that the initiative to move his body had come from the Kiev authorities.[7][8]